The Monster in the Closet
Guest Post by Emily Night

I remember lying in my bed and staring at the closet door. It was porch gray, and the rough plywood door stood out as a paler shadow among the others that composed the darkness. Some nights, I had to turn on the light to make sure that the small piece of wood nailed to the edge of the frame still held it shut. Throughout my childhood, the closet was a recurring feature among the fears that toyed with my imagination.

In my favorite novel written by Stephen King, It, George is afraid of the basement. “It” is a monster that exploits the fears of its prey like the boggart in the wardrobe in Harry Potter. However, It is not easily laughed away and is brutal in its manifestations. More recently, in the well-received and creative 2014 film The Babadook, a widow and her troubled son are haunted by a malevolent entity after discovering a children’s book. At night, the widow watches shadows growing from the direction of a large wardrobe in the old house.

In my book, When in Gnome, Daniel is a psychic who is haunted by memories related to how he inherited his powers. While the overall tone of the first novel is whimsical, the second book in the Gnome Sweet Gnome trilogy is considerably much darker, as Gnome is being invaded by creatures from the Underworld. I decided to give “I Smell Sheep” readers an exclusive preview of No Place Like Gnome and share an excerpt of an early draft.


No Place Like Gnome Excerpt
Daniel
I followed Ben to the foyer, where the temperature was several degrees colder. My breath hung in the air like fog. I stopped at the staircase, where frost was gradually accumulating on the steps.

I turned to look at Ben, but he was gone, and the house was silent, empty, and dark. The house looked deserted and dilapidated and creaked and groaned all around me. A cold wind rushed through my soul. The walls tilted, and the doors and windows were all askew. I was watching Rosewood die around me, and I felt it in my bones, like I was dying, too.

I heard a door slam upstairs.

Putting a shaky hand on the banister, I began to climb the icy stairs. Something upstairs beckoned me—a force I couldn’t deny, although my mind was clawing at the back of my skull and trying to find a way back down. “Don’t go up the stairs,” it whispered to me. “You do not want to see this.”

I hope you’ve enjoyed this glimpse at No Place like Gnome and that you’re looking forward to the finished book as much as I am. I will leave you with the words of John Lennon, taken from his song, “Beautiful Boy”:

Close your eyes have no fear

The monster’s gone, he’s on the run, and your daddy’s here.

However, before you turn off the light, you might want to make sure the closet door is firmly shut (it never hurts to wedge a chair under the door knob) and that nothing is under the bed. You know, just in case. 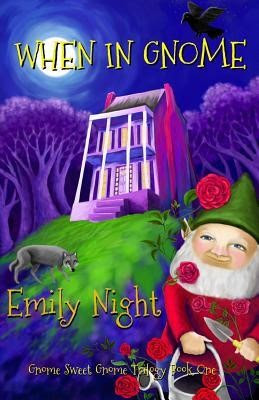 When in Gnome (Gnome Sweet Gnome Book One)
by Emily Night
Genre: Paranormal Romance
September 28, 2015
ISBN: 1515387747
ASIN: B017YGK0WU
Number of pages: 355
Word Count: 90,674
Evangeline Black quickly becomes entangled in the magic that thrives in Gnome, Mississippi, when she spontaneously shifts into a wolf only hours after arriving.

Her life is out of control, and she has to rely on the kindness of strangers: the psychic caretaker of the lovely antebellum home where her mother was born, the sheriff who practices his own version of Native American-inspired magic, and a rocker werewolf. While she struggles at the bottom of the magical learning curve, it becomes apparent that someone is stalking her.

Evangeline quickly learns two things about Gnome. The first is that anything is possible. The second is that magical creatures are much less enchanting when they want you dead. 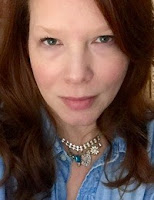 About the Author:
Website-FB-twitter-Blog
Pinterest-Goodreads
Amazon Author Page
Emily Night grew up in a series of small towns in Mississippi. The youngest of four children, she dreamed of being a writer from the moment she wrote her first story in the fourth grade. At the age of twelve, she rode her bike up to the square of a small town and asked the editor to publish one of her stories. While the editor did not, he was very kind and encouraging. She graduated magna cum laude from Mississippi College and later obtained a Master's from Belhaven University. She prefers reading and writing fantasy because fantasy allows her to test the modern-day limits of what is possible.