Coming of Age Stories: Five fantasy series that I really connected with when I was young, and that drove me to write my Sorcery Ascendant Sequence trilogy.

I was drawn into fantasy by reading many great coming of age stories. The protagonist usually starts with a great loss or alienation — perhaps they’re an orphan, or they begin to manifest magical powers which sets them apart. They are then forced to pursue knowledge — about their past, their powers, to find out who or what he/she really is. A dangerous journey ensues, one where the hero broadens their horizons by going out into a perilous world. It’s a journey of self-discovery, of physical and/or mental maturation, of moral growth. Innocence is transformed into experience.

So here are five coming of age fantasy series I read when I was young, and that shaped the way I began my writing career, and my Sorcery Ascendant Sequence trilogy:

1. Magician (Raymond E. Feist): A classic! An orphan is apprenticed to a master magician, and fate of two worlds is changed forever. This was the first modern (at the time) fantasy novel I read. I fell in love with the characters, and I discovered I also wanted a purpose, to be a part of something.

2. A Wizard of Earthsea (Ursula Le Guinn): Not a traditional fantasy adventure, but one in which the tale is of self-discovery and of acceptance of the darkness that is inside all human beings. A story about the fascination with knowledge and the temptation of power. 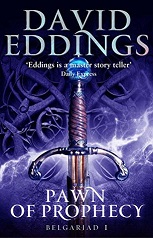 The Belgariad (David Eddings): I don’t know if this series has aged well, but at the time it was a breath of fresh air for me. A naive farm boy is led on a dangerous quest by those he loves, at the end of which it’s up to him to confront an evil god. 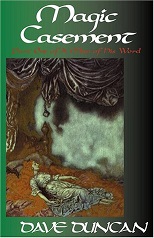 4. A Man of His Word series (Dave Duncan): A stable boy and a princess… but it works, and works extremely well. It may not be deep, but it is fun! The hero’s strengths are his stubbornness, loyalty, and good heart. 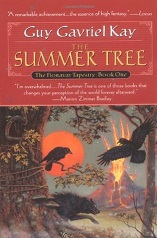 5. The Fionavar Tapestry (Guy Gavriel Kay): My first “portal fantasy”. Five young men and women are transported by a mage to the magical world of Fionavar. Modern day people bringing their modern ideals into a sword and sorcery age. All five take unique paths, some darker than others.

When I began writing, I felt I had to begin my own journey with a coming of age story. After all, I also wanted to grow along the way. I would enter a strange world and endure my own trials and failures, and triumphs. Forged anew — if I survived — I would emerge on the other side a more mature writer, having taken a long hard look at myself and my craft, and at what I wanted to achieve. 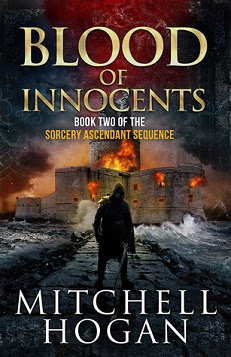 
Harper Voyager; Reissue edition
A novice sorcerer may hold the key to saving his world—or be the instrument of its destruction—in this second book in The Sorcery Ascendant Sequence, a mesmerizing saga of high fantasy that combines magic, malevolence, and mystery.

As orphaned, monk-raised Caldan and his companions flee the city, leaving behind their hopes for a new beginning, horrors from the time of the Shattering begin to close in.

With Miranda’s mind broken by forbidden sorcery, Caldan does the unthinkable to save her: he breaks the most sacrosanct laws of the Protectors. But when the emperor’s warlocks arrive to capture him, Caldan realizes that his burgeoning powers may be more of a curse than a blessing, and the enemies assailing the empire may be rivaled by more sinister forces within.

And soon, the blood of innocents may be on Caldan’s own hands
. 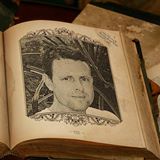 About the author:
Website-FB-Twitter
When he was eleven, Mitchell Hogan was given The Hobbit and the Lord of the Rings trilogy to read, and a love of fantasy novels was born. He spent the next ten years reading, rolling dice, and playing computer games, with some school and university thrown in. Along the way he accumulated numerous bookcases’ worth with fantasy and sci-fi novels and doesn’t look to stop anytime soon. For ten years he put off his dream of writing, then he quit his job and wrote A Crucible of Souls. He now writes full-time and is eternally grateful to the readers who took a chance on an unknown self-published author. He lives in Sydney, Australia, with his wife, Angela, and daughter, Isabelle.