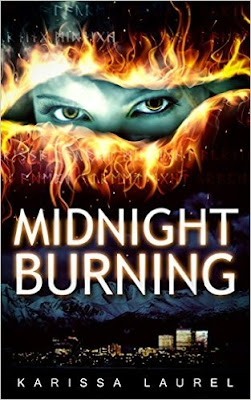 Midnight Burning: (The Norse Chronicles – Book 1)
by Karissa Laurel
July 7, 2015
Pages: 278
Solina Mundy lives a quiet life, running the family bakery in her small North Carolina hometown. But one night, she suffers a vivid nightmare in which a wolfish beast is devouring her twin brother, who lives in Alaska. The next morning, police notify her that Mani is dead. Driven to learn the truth, Solina heads for the Land of the Midnight Sun. Once there, she begins to suspect Mani’s friends know more about his death than they’ve let on. Skyla, an ex-Marine, is the only one willing to help her.

As Solina and Skyla delve into the mystery surrounding Mani’s death, Solina is stunned to learn that her own life is tied to Mani’s friends, his death, and the fate of the entire world. If she can’t learn to control her newfound gifts and keep her friends safe, a long-lost dominion over mortals will rise again, and everything she knows will fall into darkness.

Solina Mundy travels to Alaska to close out the affairs of her murdered brother Chapman. When Solina’s search for closure turns into a personal murder investigation, she quickly finds herself out of her depth. She soon discovers that Mani’s friends and co-workers aren’t what they seem and her immersion in this enigmatic Alaskan town and its cast of characters activates her dormant powers.

Like other reviewers, I found the novel’s opening to be a bit slow and slightly awkward, however, the action and interest picks up quickly and extends throughout the book. I enjoyed the Norse Mythology elements and how plot details fell into place. I must admit, this book became a bit of an obsession for me; I found it hard to put down. When I want to read on my lunch break, I know I’m hooked.

Amidst the action a love triangle develops between Solina, Val (Mani’s best friend) and Thornin (Mani’s boss). Personally, I found that the author makes it abundantly clear who Solina will end up with. I like, however, that Solina will first have to develop her own independence before that relationship will come to fruition. I am partial to assured female characters.

I highly recommend this book, with one caveat; wait. It ends with a lot unresolved and I was largely unsatisfied. Happily ever after can be too saccharine for me, but cliff hangers are the worst. While I wouldn’t characterize this ending as a cliff-hanger per se, it’s pretty abrupt and rather frustrating. Judging from the author’s website, book two Arctic Dawn isn’t out until summer. I’d say it’s a good indication that I can’t wait, I just hope book two is released before my enthusiasm burns out.

Solina’s brother Mani was murdered in an unusual way and when the police have no leads Solina decides to head to Alaska to pack up her brother’s stuff and get some closure. As Solina starts packing up Mani’s life she finds that his friend’s no a lot more than they let on but only one is willing to help her solve the mystery. The beginning was a little slow for me because it took some time to get to the supernatural aspects of the book but the wait was well worth it. Don’t give up if you find the beginning a little slow. Once the story got to the good stuff it moved right along. Very imaginative and original story line filled with the Norse pantheon and those that surround it that kept my imagination going. The love triangle between Val, Thornin and Solina was magnetic. I could not decide from one minute to the next who I wanted to see win the fight for Solina. Both men had something to be desired and it didn’t help that I couldn’t decide who to trust.

About the Author:
website-FB-twitter
goodreads-Pin
Newsletter
Karissa lives in North Carolina with her kid, her husband, the occasional in-law, and a very hairy husky. Some of her favorite things are coffee, chocolate, and super heroes. She can quote Princess Bride verbatim. She loves to read and has a sweet tooth for fantasy, sci-fi, and anything in between. Sometimes her husband convinces her to put down the books and take the motorcycles out for a spin. When it snows, you'll find her on the slopes.

Find out more about Karissa and keep up to date with new releases, including the sequel to Midnight Burning, coming in 2016.