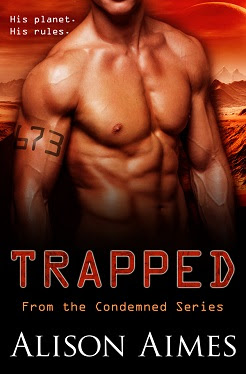 Trapped: A SciFi Convict Romance (The Condemned Book 1)
by Alison Aimes
Genre: Sci-Fi Romance
March 3rd 2016
239 pages
HIS PLANET. HIS RULES… Trapped by Alison Aimes is an action-packed, sexy sci-fi that takes you to the brink of oblivion on a planet where only the strong survive. When Bella West crash lands on penal planet Dragath25, the only thing standing between her and a mass of brutal criminals is one of their own, a ruthless loner known only as 673. But what starts out as a desperate trade based on protection and raw lust soon blossoms into a scorching need that will push them both to the edge. A tale of unbridled desire, stunning sacrifice, and unwavering love, Trapped is the first book in The Condemned Series.

Cadet Bella West has one simple objective when she joins the scientific mission to Dragath25, the notorious penal planet housing Earth’s condemned. Earn the credits necessary to save her family from starvation. But when her shuttle crashes and the majority of her crew perish, her simple mission becomes complicated fast. Now, to stay alive she’ll have to depend on one of Dragath’s own. But such protection doesn’t come free.

Convicted of a crime he didn’t commit, 673 has become more beast than man after eight grueling years on an unforgiving, hazardous planet of dirt and rock—and even more treacherous inhabitants. He doesn’t look out for anyone but himself and he certainly never grows attached. So when the bold female offers him pleasure in return for protection, he takes the deal without hesitation. He never expects how her touch will alter him. Or the growing realization that saving her may be the key to his own salvation.

But as dangers mount and their ‘simple’ deal unravels will he prove to be her surprise savior or her ultimate downfall? Because caring for someone on Dragath25 may prove the greatest hazard of all.

Is there even a proper “etiquette” when you crash land a ship on a planet reserved for Earth’s criminals and you wanna barter yourself to one of the prison planet’s criminals in exchange for protection? I mean do you just walk (or run if you’re being chased) up to the first criminal and say “If you protect me I’ll be your willing sex monkey?”

Anyway after crashing on a planet where criminals are sent, Cadet Bella West has no choice but to barter her body to a prisoner known at first as 673 then later as Caine. What starts out as a necessity begins to turn Caine from animal to man as he and Bella work to survive the volatile inhabitants of Dragath25.

Trapped is pretty much everything the blurb promises, it’s a hot and heavy Captor/Captive romance that takes place in the waaaay future. I’m surprised at how much I enjoyed this mix of Dystopian/ Sci-Fi/Fantasy romance. Another surprise is that Trapped is Alison Aimes’ debut novel! I’m sensing future Auto-Buy status if this book is anything to go by. I already want to read the next book in the series.

Bella West was pretty much what I hoped and expected a heroine to be like in a setting like the one in Trapped. She was terrified that she was going to die a painful death but her survivor’s instinct kicked in and she did exactly what she had to in order to have a chance at being rescued. Her fear didn’t make her stupid it made her smarter. Throughout the story she kept a mostly level head and positive attitude which wasn’t easy on such a dangerous planet. To me, she was the strongest, toughest character in the story. Maybe not physically but mentally and emotionally Bella proved she was more than just a scientist.

And Caine… There might be something wrong with me but, RAWR. I mean yeah he was more beast than man in the beginning and was a jerk with Bella for a while after they made their arrangement but even at his worst, Caine wasn’t a monster. He had lost his humanity but his transformation was easily one of the best parts of the book. Mostly because I was half in love with Caine myself so yeah, loved his scenes. Lucky, lucky Bella. And yes, I would classify Trapped’s love scenes as erotic so read on at your own risk. Or take the plunge (No pun intended at all), I dare ya.

Trapped felt a bit lengthy in some areas where Bella and Caine weren’t up to much and while I wouldn’t say the story lagged, it definitely did slow down but for the most part the entire story has a “Go, go, go!” pace to it that I appreciated. Lots of supporting characters but don’t get too attached to anyone is my warning. Dragath25 is a prison planet where the worst of the worst are sent and Aimes doesn’t shy away from the violence and death that seem to be everyday occurrences on the planet so that might make me a bloodthirsty wench but I liked that she included scenes like that, it emphasized the danger for Bella and justified her sometimes paralyzing fear and her decision to barter herself to Caine.

Excerpt“Fine. Go.” Bella screamed at the spot where he’d been. “I should have known you wouldn’t keep to the deal. You’re nothing but a lowlife Dragath25 criminal. Who needs you?”She was turning back toward the cave when the ground shook. Reeling round, her eyes went wide. Convict was steamrolling toward her, a murderous look on his face. She’d only just begun to run when powerful arms jerked her back against hard, warm steel. Clawing, kicking, she tried to break free, but it was no use. Caged by one thick arm around her stomach and one tangled in her hair, she was trapped. “That’s right, fighter-girl. I am nothing but a lowlife Dragath25 criminal.” “Stop.” She shoved against his chest. It was as unmovable as the rock at her back.“Criminals don’t stop.” He fisted her shirt, drawing her onto her tiptoes, bringing her face in line with his. His knee slid between her thighs, forcing them wide. “We take.” His hand skimmed down her body. “We violate.” Heartbeat slamming against her ribs, she tried to fix this. “I—I shouldn’t have said what I did. I’m sorry.”“That’s right. You shouldn’t have said it.” He wrapped his wrist tighter in her hair. “Just like you shouldn’t have ignored my direct order.”“I understand that now.”It was as if he didn’t hear her. “You think it’s easy to survive out here. You think this is a joke. You think I made it on this fucking hellhole this long out of sheer luck.”“No.”“I’ve seen things you wouldn’t believe. Done things I can barely stand to think of.” Echoes of those horrors stretched tight across his face. “But I’ve made it here eight years and I don’t intend to die now.”Her chest grew tight. She didn’t think she could bear even another few days on this place. She couldn’t imagine surviving eight years. “I’m sorry. You’re right.” She spoke fast, the words spilling from her, more genuine this time. “I wasn’t trying to get you killed. I was trying to help. I appreciate all you’ve done. Hiding us in the cave. Saving us from the tigos. Even the water and bandages you gave my colleagues.” She cleared her throat. “You were keeping to the deal. I was the one who screwed up.”He didn’t acknowledge her words, but his grip loosened, the tension in his body lessening. “It’s easy to die out here.”“But people make it.” Her voice shook. “You’ve made it. I will too.” He shook his head, something that looked a lot like regret in his gaze. “You’re soft. Delicate.” The finger that had been so predatory against her skin now felt like a caress. “Keeping you alive will be next to impossible. Even without the added stubbornness.”A new and astonishing idea flooded through her, a live wire of awareness to her brain. It wasn’t cold-heartedness that had promoted his departure, but the exact opposite. He didn’t want to watch her die.

About the Author:
website-FB-twitter
Alison Aimes is the award-winning author of the sexy sci fi romance series the Condemned as well as the sizzling contemporary romance Billionaires’ Revenge series. A sci fi fanatic with a PhD in Modern History, she’s an all over the map kind of woman whose always had a love for dramatic stories and great books, no matter the era. Now, she’s creating her own stories full of intrigue and passion, but always with a happy-ever-after ending. She lives in Maryland with her husband, two kids, and her dog. When not in front of the computer, she can be found hanging with family and friends, hiking, trying to turn herself into a pretzel through yoga, listening to a fabulous TED talk, or, last but not least, sitting on the couch imagining her characters’ next great adventures.
Sharon Stogner at 12:00 AM
Share