Jack Sparrow (Pirates of the Caribbean) – Indomitable survival instincts, of course. He can get out of any situation. We’d need that kind of resourcefulness.

Frank Martin (The Transporter) – So we can make fast escapes. Plus, he kicks butt too.

Ygritte (Game of Thrones) – As a wildling, she can survive the harshest environments, and her archery skills would come in real handy.

Tony Stark (Iron Man) – Even without technology, he’s got brains. Genius brains. Plus, we’d need witty one-liners to keep our spirits up.

(I chose only regular humans for my team, because the last thing we’d want is a magical, mutant, or superhero character getting turned into a zombie. We’d be totally screwed.) 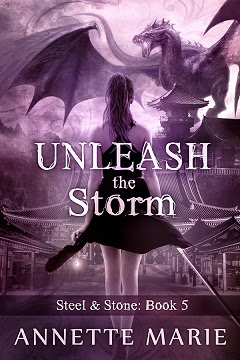 March 4, 2016
300 pages
Piper and Ash's story concludes in the fifth and final installment of the Steel & Stone series.

She was wrong, and her mistakes were paid for in blood.

Leaving her world — and her failures — behind, she retreats to the Underworld with Ash and the other draconians. They forge deep into long abandoned mountains, the first draconians to fly the valleys and passes in centuries — or so they thought. Until now, Ash’s mysterious heritage has been nothing but a name, but his presence does not go unnoticed. A new danger stalks him, one that may be even greater than what they escaped.

Cut off from the power she’d come to rely on and lost in a world where she doesn’t belong, Piper has never felt so hopeless. But she must find her strength, and find it quickly, before she loses Ash to an ancient power he can’t fight, before her home is devastated by the daemon war, and before her mind, body, and soul are consumed by the Sahar’s insidious magic.

About the Author:
Website-FB-Twitter
Amazon-Goodreads
Annette Marie is the author of the Amazon best-selling YA urban fantasy series Steel & Stone, which includes the 2015 Goodreads Choice Award nominee Yield the Night. Her first love is fantasy, a limitless realm of creativity where she can break all the boring rules of real life, but fast-paced urban fantasy, bold heroines, and tantalizing forbidden romances are her guilty pleasures. She proudly admits she has a thing for dragons, and her editor has politely inquired as to whether she intends to include them in every book.

Annette lives in the frozen winter wasteland of northern Alberta, Canada (okay, it’s not quite that bad). She shares her life with her remarkably patient, comparatively sensible husband and their furry minion of darkness—sorry, cat—Caesar. When not writing, she can be found elbow-deep in one art project or another while blissfully ignoring all adult responsibilities.