Thanks for inviting me to play at I Smell Sheep! I should point out (as an Australian author) I’ve smelled plenty of sheep in my time and it’s not a pretty as it sounds. The pungent smell of a shearing shed is something you have to experience first hand to get the full effect. Unlike this website, which smells divine.

I’ve had peripheral dealings with things four-legged and wooley, so I thought I’d share some of those experiences with you.

I grew up in south-eastern Australia where it’s all about the wheat and sheep. 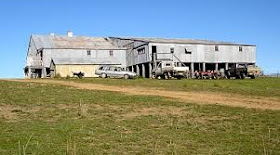 My great-uncle owned a farm, so when I was little my grandmother would take me out to the sheds when it was shearing time to help with morning and afternoon tea for the shearers. It was busy, loud – and yes, smelly – but I have wonderful memories of those times. The adults would give me a broom and get me to sweep the shearing shed floor – you wouldn’t believe how many stray clumps of wool there are in a shed! The wooden floors were always slightly tacky from the lanoline and the wind would blow away more than I could sweep. I would have been maybe seven or eight at the time, so I thought I did a wonderful job. And luckily for me, nobody told me any different. My very first boyfriend was the son of a farmer (Aussie rancher) and during sheering season he smelled like sheep – all the time. It didn’t matter how many showers he had or what he washed in, it was always eu de sheep. I wasn’t all that thrilled about it when I was sixteen, but all these years later the smell of lanoline still makes me smile. (He was a very lovely boy who grew into a very lovely man and we still keep in touch). 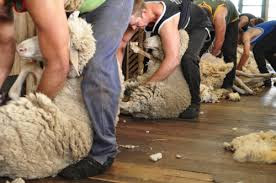 The Shearer and I used to go to woolshed dances with his parents. The surrounding farms would take turns to ‘host’ a dance, and someone would scare up a ‘band’ (usually consisting of a pianist, a drummer and a guitarist if you were lucky – sometimes it was just one person on an electric organ). They were family affairs but all-comers were welcome. I love to dance (I actually teach bellydancing these days) and I think my love of that art form was brought to life in a shearing shed when I was sixteen.

So – sheep, dancing and romance…you see the link right?

Amazingly enough, none of my stories are about farmers or the rural life. I lean right into the fantasy/paranormal worlds when my imagination is allowed to run free. My heroes are always alpha males, and always warriors of one kind or another. I think a large reason for that is the ten years I served in the Navy, but that’s a story for another time…

Thanks for sticking with me while I rambled down memory lane, and good luck for those of you who are entering the giveaway. With three copies of ‘Called By Fire’ (book one) up for grabs, you’d better enter as soon as you can.

With many thanks and brightest blessings
Delwyn 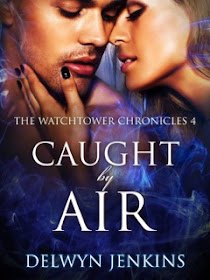 Caught by Air (The Watchtower Chronicles, #4)
by Delwyn Jenkins
February 24th 2016
by Momentum Books
Amelia will trust her body to a man, but never her heart. Unfortunately for her, Dane wants both.

Amelia Sutton isn't interested in being a hero. She's just a witch who wants to live a normal, happy life. But that life is under threat from Malleus – a practitioner of magic so dark it could bring down the world.

To protect her home and those she loves from Malleus, Amelia must perform a dangerous ritual to increase her power. Unfortunately for her, that means spending the night with a man already too close to stealing her heart and jeopardizing her no-risk future.

As a Watchtower Knight, Dane is sworn to defend and protect Dahnan Witches. His sense of duty and loyalty has always come first, and despite his feelings for Amelia, he knows she's not meant for him. But when Amelia asks him to join with her in an ancient binding ritual, he dares to believe they may have a chance at love after all.

About the Author:
website-FB-twitter-Pin
Delwyn likes radical career changes. After serving in the Australian Navy for ten years (and being exceptionally disciplined) she switched to a full-time university Arts student (where getting out of bed before 11am proved traumatic). She worked as a teacher, an editor, and now she writes full time - a career she plans to stick with for as long as anyone wants to read her stories.

She’s an avid reader and movie-goer, an amateur bellydancer, and a disinterested cook. She lives on the beautiful south-east coast of Australia where the changeable weather suits her mercurial nature. 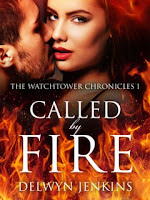 giving away three copies of book one Called By Fire