Book Review: The Passion Season: Book I of the Covalent Series by Libby Doyle + giveaway 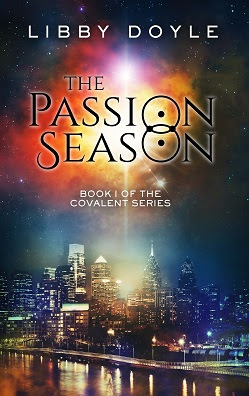 The Passion Season:
Book I of the Covalent Series
by Libby Doyle
Genre: urban fantasy/paranormal romance
Publisher: Fairhill Publishing LLC
March 20, 2016
ISBN: 978-0-9972985-0-5
ASIN: B01CCE4U8E
Number of pages: 556 in ePub
Word Count: 117,259
Cover Artist: Damonza.com
In loving him, she overcomes her pain, but to discover his true identity would shred the reality she thought she knew.

He is Barakiel. Warrior. Exile. Hopeless romantic. Barakiel is Covalent, a race of ancient beings who use their great power to keep the elemental forces of Creation and Destruction in Balance. The Covalent Council exiled Barakiel to the Earthly Realm as the price of the treachery of his father, Lucifer, who wages perpetual war against it. Lucifer also relentlessly pursues his son. The Council thinks Lucifer views his son’s power as a threat, but Barakiel knows his father seeks to destroy even the memory of love.

She is Alexandra “Zan” O'Gara. FBI Agent. Army veteran. Recovering drunk. Zan’s troubled past left her with little interest in men, but she had never encountered anyone like the stunning Rainer Barakiel. Zan believes Rainer is a wealthy businessman with expertise in edged weapons who can help her with a case. From the moment she meets him she wants him more than she’s ever wanted anything, but her intense attraction is as frightening as it is thrilling.

This is their love story. As Zan’s deepening feelings for Rainer lead her to confront her emotional damage, he struggles to meet the demands of his home world so he will be free to love her, and to reveal his true nature. Through the gruesome crime that first brought Zan to his door, Barakiel learns that his presence in the Earthly Realm has placed some of its most vulnerable citizens in danger. Compelled to protect them, he undertakes a series of duties he may not survive, even as Zan rescues him from centuries of a deadened heart.
Book Trailer https://youtu.be/YwBhS0DcDR0
Amazon iTunes BN

The basis of the Covalent race is pretty damn cool to this science nerd. The author used the chemistry behind covalent bonds between atoms (do you remember your chemistry classes?) and Christian mythology of angels, heaven and hell to explain the purpose of her Covalent race. Guardians (like angels) are Warriors of the Rising (When Lucifer led the rebellion against The Council Forces in the Covalent Realm [Heaven]) that give up their lives to fight the demons and Corrupted (Covalent that have lost the power of balance, but had it replaced with the force of Destruction [Hell]).

Guardians keep the balance between the Creation and Destruction elemental forces; just like a covalent bond between atoms. Demons and the Corrupted can cross into the earthly realm during the equinox and solstices to fight. But Guardians must keep the balance in themselves by not hurting anyone weaker than they are, which means humans, even if they deserve to die for their evil deeds.

"Balance was the wellspring of Covalent power, the equalibrium of Creation and Destruction, order and entropy, attraction and repulsion, love and hate."

It is all very complicated, but the author does a great job of simplifying it so it is easy to understand.

The story is about the Guardian Barakiel (Covalents have angle like names), and his relationship with Zan (his forbidden, human, fated mate) and also his bond to Pellus. A Covalent Adept and his closest and dearest friend (this is not a sexual thing). There are almost as many scenes between Barakiel and Pellus as with Zan. That makes three main storylines in this one book (Barakiel-Zan, Barakiel-Pellus, Barakiel-good vs evil arc) and that was a problem for me, I felt like I was reading three different books, which also made it long: 556 pages! I prefer one main storyline and then lots of sub-plots.

There is PNR goodness to feast on and cool world building to geek out to, but if you don't love both you might find yourself skimming some parts. For me it was the PNR stuff.


Excerpt: The Meet
From part one, Vernal Equinox, Chapter 1

The front of the main building had a set of massive wooden double doors and a smaller heavy wooden door to the side with the bell. She rang, and when the door opened she forgot she was supposed to speak. He was gigantic, at least six foot eight, with broad shoulders and a lithe, athletic build. A few strands of his unruly, mid-length blond hair fell over eyes that seemed to be several shades of blue at once. They drew her in with more than their beauty, as if something primeval was hidden in their depths, just barely restrained. He faintly smiled. She knew her face was getting red.

[Internal] What the hell. Don’t be such a fool.

“Um, hello, I’m Special Agent Alexandra O’Gara of the FBI.” She stuck out her hand. “My office made an appointment.”

“Yes. I’m Rainer Barakiel. A pleasure to meet you.” His voice was rich and deep and he spoke with a slight accent. When he shook her hand, she held it too long. She still felt flushed.

“I, um, I appreciate you taking the time for this, Mr. Barakiel.”

[Internal] God, so lame. He must have to deal with swooning women all the time, but I doubt he expected it from an FBI agent.

Turning gracefully, he showed her through the door. Zan tried not to stare at the way his jeans fit his hips, or the contours of his muscles beneath his gray cashmere sweater. Gripped by a strong urge to run her hands all over him, she was lucky his place was filled with fascinating things to distract her. Antiques and art were arranged tastefully in the open space, among brown leather couches and chairs and colorful woven rugs. Pale sun from high skylights glinted off a sunburst mosaic above the mantle of a huge concrete fireplace. Zan tried to concentrate on her surroundings, at least until her pulse slowed down.

“What a fantastic place.”

“Thank you.” He dipped his head toward her in an old-fashioned display of manners that she found charming.

“This whole property is great. What was it used for, before you lived here?”

“This land was part of the old Rohm and Haas Chemical plant you can still see as you enter. The facility was shut down in 2010.”

“I wish more people would reclaim these abandoned places by the river. Most of it just goes to waste, and meanwhile they’re developing Chester County farmland.”

“Yes.” He looked at her intensely. “I felt good about redeveloping a brownfield. I had to do a lot of remediation, but now it’s an excellent place to live.”

“All you need now is for the city to buy the front parcel and turn it into a park.” Zan gave him her best sunny smile, with an openness she knew made people trust her.

“That would be ideal,” he replied, “but I’m not holding my breath.” He returned her smile.

[Internal] My god, you’re beautiful. How are you that beautiful? Why am I here? The knives.

“Um, in the interest of not taking up any more of your time than necessary, these are the knives in question.” Zan held up the case. “Daggers, I think. Did Professor Carson explain where we found them?”

“Well, someone conducted some kind of ritual in Independence National Historical Park. We wouldn’t be that concerned with weird people doing weird things at night, but we found a human spleen. We tested the DNA and ran it through the database and discovered that the spleen came from a body found this past winter by the Philadelphia police. All its internal organs had been removed. The police called us because they thought it might involve organ trafficking, but we never found any evidence of it, so we weren’t much help. No one ever filed a missing persons report on this man, and Philly PD was never able to identify the corpse, let alone solve the crime.”

“Very. We thought if you could tell us something about the knives it might give us some insight into what this whole thing was about, maybe generate some sort of lead. They look old, and Professor Carson said you are an expert in antique bladed weapons.”

“Yes. I collect them. I’ve learned a lot over the years.”

“Let’s take a look,” Zan said. He led her to a massive carved table to the left near the kitchen area. She opened the case and laid the daggers out on a cloth. After he leaned down to scrutinize them, he said they were ceremonial daggers and asked if he could pick them up. Zan told him that because they were evidence, he would need to wear latex gloves. She handed him a pair. He tried to put one on for a minute, then frowned at her.

Zan stared at his hands. They were huge, but not meaty. They looked like they could crush a man’s skull, but also assemble a fine Swiss watch.

[Internal] Or maybe gently touch me.

She felt the heat rise to her face again. He raised an eyebrow.

“You can use the glove like a handkerchief and just pick it up that way,” she said, fixing her gaze on the floor.

Picking up a dagger, he held it level with his eyes. When he had done the same to all four and they were back in the case, he motioned Zan closer and directed her to lean down. He showed her the intricate motifs and the manner in which the blades were joined to the hilts. He explained that from these features, he could determine that the blades were ceremonial, made in France in the late 19th century. She struggled to listen to what he was saying. That impossible face was so close, and she could smell him. He smelled like a pristine forest in the spring.

website-FB-twitter
Pin-blog-instagram
goodreads-amazon
Libby Doyle is an attorney and former journalist who took a walk around the corporate world and didn’t like it. She escapes the mundane by writing extravagant yarns, filled with sex and violence. She loves absurd humor, travel, punk rock, and her husband.
Mailing List: http://eepurl.com/bWvolH