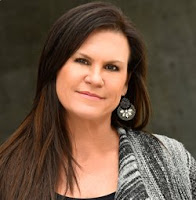 Today we talk with Rhenna Morgan about her paranormal romance The Eden Series, Aquaman and what mammal Rhenna would like too be for 24 hours...oh, and cowboys!

Sharon: Hello Rhenna! Welcome to the flock…by the looks of your covers, we’re gonna get along just fine…

Rhenna: Oh, girl! I LOVE my yummy covers and will happily browse other man candy covers right beside you.

Sharon: For those who aren’t familiar with your Eden series, tells us a little about it?
Rhenna: Sure! The Eden Series is contemporary fantasy romance, which is a fancy way of saying it’s got Lord of the Rings-style world building but based in a contemporary setting. Eden still exists and is inhabited by a sister race to our own called Myrens. Think of humans 2.0 with lots of extra bells and whistles where powers are concerned. And yes, the heroes are even yummier than the covers.

Katie: So…the men in Eden get any particular type of “extra” bells and whistles did they get?
Rhenna: It’s funny you ask that. All Myrens wield the elements to some degree. (Earth, Fire, Water, Air, & Electricity) They also have the ability to speak telepathically with certain people (family & mates) and can employee telekinesis, which allows them to fly. However, there is a distinction between men and women in the way powers are wielded. Men have more aggressive/defensive skills where women are more centered on nurturing. For instance, a warrior would be able to battle with this electrical and fire skills where a woman might have more affinity for the earth and healing.

Sharon: Book three just released, Waking Eden. Can the books be read in any order?
Rhenna: This is always a tricky one for me to answer. Yes, you can read them each on their own as each story spotlights a different couple. I always have at least one beta reader who hasn’t read previous stories give the manuscript a spin just to be sure. That said, there is an overarching plot that spans all four books, so most people agree that they’re best enjoyed in order. Especially, with the characters intertwined through each one.

Sharon: So this will be a four book series?
Rhenna: Yes! Book four, Eden’s Deliverance, is due out October 11th!

Sharon: Let’s say a certain sheep *shifts nervously* wants to meet an Eden warrior…how would she go about it?
Rhenna: That’s a tough coup to pull off, at least with the way things stand between the two realms today. You see, when the Great One created the Myren race, they gave them two tenets; No interfering in human destiny, and no exposing their race to humans. You’ll find out why these tenets came to be before the series is over…as well as if they’ll still be around in the future.

Now, all that said...Eryx, Reese, and Ramsay have a way of making a strong enough impression on a gal, they tend to show up in dreams quite easily.

Sharon: What kind of Valentine’s gift would Ramsay Shantos (hero of Waking Eden #3) give to his beloved?
Rhenna: OMG…I’m so tempted to share a spoiler here, but I won’t because that would totally ruin a very special part of the book. You’ll learn though, that Ramsay is quite the sentimental type when he wants to be. He’s got no problem spoiling Trinity with his vast material wealth, but he’s far more aware of the impact of intangibles. So, if Valentine’s Day were around the corner, you can bet whatever he gave her would NOT be wrapped in a package, but would be something she’d carry in her memory forever.
Sharon: le sigh….
Rhenna: I know, right? Hot AND thoughtful. Hard to beat that combination.

Sharon: If you could spend 24 hours as any mammal, what would it be?
Rhenna: A black panther. They’re just so pretty and graceful…and yet still deadly.

Sharon: Play: marry, kiss, avoid with comic book characters.
Rhenna: Marry – Wolverine, because, um…hello?
Kiss – Aquaman – I haven’t seen it yet, but I don’t care. If Jason Momoa is playing him I’m sold.
Avoid – Deadpool – He freaking cracks me up, but I can’t keep up with him.
Sharon: ERMERGERD…I can’t wait for Aquaman…I heard it is going to have a lot of humor in the movie.

Rhenna: I’m right there with you!

Sharon: Smell the air…what do you smell right now?
Rhenna: The water off the San Diego Bay. I’m just wrapping up #RWA16 (Romance Writers of America Convention) and am catching a quick break to answer questions!
Sharon: ERMERGERD (yeah, I need to find a new expression of awe) I’ve never been to RWA yet! I will one day. Did you meet any of your author rock stars?
Rhenna: I did! Julie Kenner (J. Kenner) is one of my favorites and I always make time to swing by and catch any of her panels. I also got to see Sylvia Day and Nalini Singh with is always a thrill.

Sharon: What book would you like to experience for the first time again?
Rhenna: Kristen Ashley’s Motorcycle Man.

Sharon: cowboy or CEO?
Rhenna: Again, I’m a Libra. I’d prefer both because I hate deciding, but I’ll go with cowboy since that’s the hero I’m writing right now.
Sharon: Oh! Do tell…or is it a secret?
Rhenna: Not a secret at all! I just signed a new six-book deal with Harlequin’s Carina Press for a super sexy, gritty contemporary romance series! It’s called the Haven Brotherhood and features all kind of different heroes from biker types to kinky Scots. Trevor (the cowboy) is featured in book three, Roped & Tied. Here’s a little series overview:

Haven Brotherhood
A brotherhood born from poverty and dangerous beginnings. Six men who’ve not only dragged themselves out of the gutter, but leveraged their street smarts and individual skills to make sure no person or socio-economic class ever holds them down again. Between them, they share two vows. To protect family at all cost, and to pay their good fortune and family ties forward by finding other men like them and building their unique skills. The only rules the brotherhood cares about are those driven by their moral code. And heaven help the poor bastards who get between them and the women they’ve claimed as their own.
Book one, Rough & Tumble, will be out in February!

Sharon: show tunes or Disney songs?
Rhenna: Disney songs. (Hey, don’t judge. I’ve got kids.)
Sharon: No judging here! My kids are grown, but we owned all the best of Disney
Rhenna: Just promise you won’t turn on Frozen. Geez…you can only hear those songs so often.

Sharon: Is your bed made or unmade right now?
Rhenna: Made, but I’m in a hotel this week, so I kind of cheated.

Sharon: Thank you again for taking the time to talk with us! If you want, some of our little lambs can give you a tour of the dungeon…just bring the flame retardant shield…we got a dragon.
Rhenna: Love to! (And mmmmm…..dragons.) 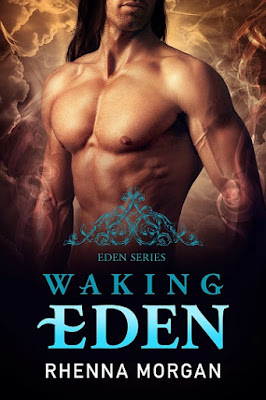 Waking Eden, Eden #3
by Rhenna Morgan
Genre: Contemporary Fantasy Romance
July 26, 2016
The only hope for saving their race is to surrender their hearts.

With a long foretold and annoyingly vague prophecy warning of immense change for Eden, Ramsay Shantos is forced to hunt words and legends instead of rebels. For a man of action, it’s the worst kind of agony. Until he encounters a sexy librarian who bears the fated prophecy’s mark. A mark no human should possess.

Tortured by her mixed heritage, Trinity Blair has enjoyed little human touch in her life, let alone intimacy. Even the most innocent contact fills her mind with a person’s deepest, darkest secrets—except for Ramsay. Her immunity to his thoughts sparks a fragile hope that she might finally experience the passion of her Dark Spiritu brethren…unless he’s the dangerous crossroads her father predicted.

When knowledge of Eden goes viral in the human realm, Trinity is Ramsay’s only hope for quelling mass panic. Can he risk revealing the secrets of his race to the guileless ray of sunshine? Or is she the unknown source of Eden’s destruction?

Warning: Contains one playboy warrior well-equipped with wicked words, a panty-melting grin, and well-honed moves in and out of the bedroom.

A native Oklahoman with two beautiful girls and a fantastic husband, her resume reflects her passion for new experiences. Since graduating with a Bachelors in Radio, Television, and Film at Oklahoma State, she’s racked up positions ranging from on-air radio talent, skip tracer, and promotions director, to real estate agent, project manager, and business analyst.

Like most women, she’s got obligations stacked tight from dusk to dawn. That’s where the romance comes in. Reading, or writing, romance has been her happy place since she cracked the spine on her first Christine Feehan book years ago. Nothing thrills her more than the fantasy of new, exciting worlds, and strong, intuitive men who’ll fight to keep the women they want.

Whether it’s contemporary, paranormal, or fantasy you’re after, Rhenna’s stories pack romantic escape for the women who need it.