Spotlight: Reaping the Harvest (Warrior of the Way Book 1) by Robbie Cox + excerpt 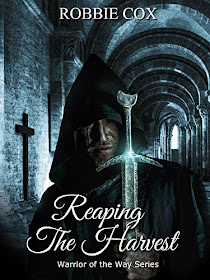 Reaping the Harvest (Warrior of the Way Book 1)

Rhychard Bartlett returns as the wielder of the Guardian Sword in this long-anticipated sequel to Reaping the Harvest, not only to face a runaway elf, a ghost, and visions of flames that actually burn his body, but also another member of the Void wanting to open a Gateway to the Nether. Add to that a mysterious dark elf that just walks up and says hello, and it's been one hell of a Monday for our hero.


Excerpt Lore Master:
The cold night blew an icy wind over the valley that became a battlefield. The metallic scent of blood and death filled the air as well as the dying cries and whimpers of the fallen elves. Mephalus stood in the middle of the slaughter, the Guardian Sword dangling from his arm. He heard a whistle slice the air, the sure sound of an arrow splitting the sky on its way to end him. He only laughed as he raised the sword to deflect it, breaking the stem in two. However, the arrow head flicked end over end, gouging his right cheek. Blood, the first of his shed that night, gushed down his face to stain his jerkin. He growled at the array of elves above him. “From the distance? You fight with arrows? Cowards! Come and fight like Warriors so that you may die like Warriors.”

“We did not launch the arrow, Mephalus,” Kendalais said as he gestured to the hill to the south.

Mephalus turned and saw the townspeople lined up along the hill’s ridge to the south of the stone fortress. Torches lit the night sky as their cries of outrage and anger filled the air, a mob bent on retribution. They held swords, pitchforks, sickles, and even bows and arrows as they marched to encircle the one who wished to subjugate them.

Mephalus roared his menacing laughter. “You’re actually going to allow the people of this town to fight your battle for you? You’re even more of a coward than I thought. Have the Warriors gone soft, Kendalais?”

Whistling filled the air as flaming arrows launched from the townspeople, aimed at Mephalus—or rather, in his vicinity. Fire blazed trails of light through the black night, streaking their way toward the bodies that littered the earth around Mephalus’ feet. The arrows pierced the ground, the flames catching the dry earth and the bodies that lay dead on the ground. The flames flickered, sparking fires that engulfed all around the elven Warrior. More arrows sliced the air, igniting even more fires. The fiery rain continued.

Mephalus sent furtive glances around him; flames engulfed the entire area. He screamed at the townspeople, but more fiery arrows headed off every advance he made to escape the fire. He turned to Kendalais. “Is this how your king passes judgment?” he bellowed into the night. “You allow these…humans…to kill one of your kind?”

Kendalais slid his sword into its scabbard before crossing his arms over his chest. He stared down at Mephalus with cold, detached eyes. “You know the Seelie do not interfere in the affairs of humans. You crossed that line, Mephalus, and now the humans decided to handle it themselves. They are the ones who passed judgment and we will not interfere.”

“Cowards!” The flames caught everything in their wake, sending up smoke and flames in suffocating heat. Mephalus started to have problems breathing, the heat singeing his mouth and throat. He could no longer see past the flames, which grew to reach over his head. More arrows hit the ground around him, one piercing his chest, knocking him backward, the flames setting his hooded cloak on fire. The roaring flames drowned out his anguished cry. More arrows assaulted him, some hitting the ground, others piercing his body. “Kendalais!” His voice, a mere gurgle of boiling blood, faded away.

The pain of the flames seared his flesh, scorched him, and made it unbearable. He gripped the sword, trying to use its magic as a barrier against the agony, trying to hold the inevitable off as long as possible. However, the Warriors inside his sword screamed at him as they united against him to bar his path to the sword’s magic, cheering his death, even though they dreaded being locked inside the sword with him for eternity. The townspeople cheered as his screams filled the night. Yet, all Mephalus could hear was the roar of the flames, the sizzling of the blood on his cheek from where the arrow struck him. He fought to breathe, but only drew in heated air which scorched his lungs, devouring his oxygen. Then everything went black and he felt himself falling. He never felt himself hit the ground, however.

The pain disappeared. So did the sky and the ground, even the townspeople and those insufferable Sidhe Warriors. He glanced around and all he saw was darkness. He looked down, but not even his hands or arms were visible. 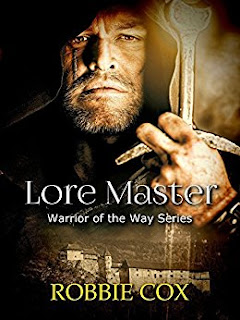 About the Author:
FB-twitter-Instagram
newsletter-amazon
Robbie lives in sunny Florida where he spends his days where he can usually be found tucked away on his back porch with a cup of coffee while working on his latest manuscript. He has enjoyed a freelance career writing for several magazines, sharing some of his interesting viewpoints on life and those around him. While he enjoys traveling with great friends and their family. Most often, he can be found at home grilling out and sharing a laugh with those who matter most to him.

After publishing his first book in 2013, Robbie realized he is not satisfied writing in one genre. Robbie is the author of the Warrior of the Way series, an urban fantasy that takes place along the Indian River in Florida, and several contemporary romance series, such as the Rutherford series, Fangirls, and the Harper Twins. He also has written a paranormal romance, Come Halloween, as well as a Christmas story, Ribbons & Bows. While currently finishing his Warrior of the Way series, Robbie has enough works-in-progress to keep him writing for the next fifteen years in all genres.