An Import of Intrigue takes place in a part of the city of Maradaine called "The Little East”, a handful of blocks populated by enclaves of immigrants and foreigners from all over the larger world. Most citizens of Maradaine avoid these enclaves, and their only understanding of other countries and cultures comes from Augustine Montrose’s memoir, My Travels of the World. Here we look at an excerpt from his book, where he talks about one of the cultures encountered in An Import of Intrigue. 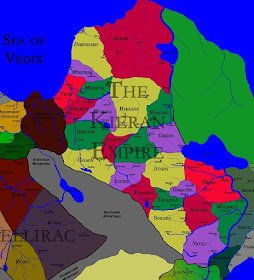 Maradaine Culture Reports
As a child, I once visited a traveling carnival, where I encountered a warped mirror. In that mirror, I saw a twisted reflection of myself— somehow recognizable yet unfamiliar at the same time. This experience kept coming to mind in my journeys through The Kieran Empire.

Any historian or scholar worth their letters is, of course, familiar with the Kieran Empire. At its height, the Empire controlled over half of the continent, including Druthal. The origins of classical thought, mathematics, astronomy, even our language, all come from the Empire. Our culture is still very much shaped by what they made us, even after over a millennia of freedom from their direct rule.

So it stands to reason that in the Kieran Empire, I would see a dark, decadent reflection of ourselves. So decadent, I am amazed that it not only functions as a civilization, but has continued to do so for nearly three thousand years. Even if it a pale shadow of the great power that it once was.

Like Druthal, the Kieran Empire is ruled by a combination of a noble class and elected legislators. However, said rule lacks the balance that our own government has. Nobles go largely unchecked, and the elections for the Kieran Senate are shamelessly, openly corrupt.

The fascinating thing to me was how, for the average Kieran citizen, this seemed normal and equitable. Perhaps this is because the average citizen is mostly concerned with their own hedonistic pleasure, which they all pursue with utter abandon.

I would not shock gentle Druth readers by cataloguing the perversions and degradations that would casually and openly be engaged in public company. I can say that I was amazed that any proper business of life gets done. Perhaps that is because in the Empire, pursuit of wealth is the only way to have the freedom to engage in the decadence that every Kieran aspires to.

This is tied to my observations of how fundamental labor is performed, and the legal system in the Empire. The laws in the Kieran empire are byzantine and absurd, and it is quite easy to find oneself charged and convicted of a minor violation. Needless to say, the Empire has more than its share of lawyers. What the Empire does not have, however, are prisons. Any crime, regardless of the severity, is punished by fine. A man could freely murder another if he can afford the fine.

If he cannot afford the fine, though, he then must place himself in a labor camp as a slave until his work pays off his fine. It is in these camps that the work of farming, mining, and other labors that keep the wheels of civilization moving is performed. Nearly half the population are amongst the slave class, and given the complex rules surrounding fines— which are inheritable— there are thousands of slaves who are still paying the fine of a longer forgotten ancestor who died centuries ago.

That is not to say there are not those who excel in arts and craftsmanship in the Kieran Empire. Beauty is held in high regard in the Empire, and those who are gifted in making something that can be appreciated by the noble and professional classes can find themselves in a lucrative career.

This is why the most common exports from the Empire to Druthal are luxury crafts: fine made furniture, jewelry and wine. Kieran wines— especially from the Nitaria region— are possibly the finest in the world.

The Kieran Empire is also the highway to the east, at least over land, and so it is through there that we reach Fuerga and points beyond…. 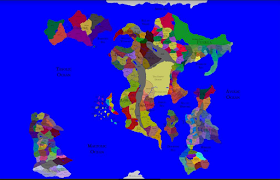 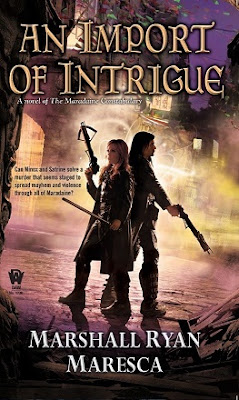 The neighborhood of the Little East is a collision of cultures, languages, and traditions, hidden away in the city of Maradaine. A set of streets to be avoided or ignored. When a foreign dignitary is murdered, solving the crime falls to the most unpopular inspectors in the Maradaine Constabulary: exposed fraud Satrine Rainey, and Uncircled mage Minox Welling.

With a murder scene deliberately constructed to point blame toward the rival groups resident in this exotic section of Maradaine, Rainey is forced to confront her former life, while Welling’s ignorance of his own power threatens to consume him. And the conflicts erupting in the Little East will spark a citywide war unless the Constabulary solves the case quickly.

About the Author:
website-twitter
Marshall Ryan Maresca grew up in upstate New York and studied film and video production at Penn State. He now lives Austin with his wife and son. His work appeared in Norton Anthology of Hint Fiction and Rick Klaw’s anthology Rayguns Over Texas. He also has had several short plays produced and has worked as a stage actor, a theatrical director and an amateur chef. His novels The Thorn of Dentonhill and A Murder of Mages each begin their own fantasy series, both set in the port city of Maradaine.

GIVEAWAY
One set of A Murder of Mages and An Import of Intrigue and are for US/Canada only.