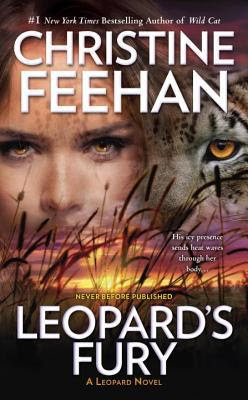 Passion melts the will of an ice-cold criminal when he meets the one woman who can tame the beast inside him.

With her own bakery in San Antonio, Evangeline Tregre made a new life far from the brutal lair of shifters she was born into. Though she is all too aware of her leopard-shifter blood, she never felt the sensation of a wild animal stirring inside her. Not until Alonzo Massi walked into her bakery. The powerful shifter is as irresistible as he is terrifying, but his icy demeanor tells her to keep her distance.

Alonzo knows better than to let himself get involved with someone like Evangeline. She doesn’t deserve the type of danger that follows him, or the threat of his Amur leopard. But even with his lean muscle and iron will, Alonzo isn’t strong enough to stay away from the one woman who can make him feel at peace. And when their secret lives draw a mortal threat, Alonzo unleashes the feral passion he keeps pent up inside himself.

Alonzo is an intimidating, emotionless killer. He knows that his leopard is a killer and just as vicious as he is. I didn't like his character at all, even though he saved her from probably being claimed from another man who wouldn't have treated her as well as he did and he did love her, I still didn't like him. He was bossy, domineering and a killer. Sure his family made him that way but he wasn't a good guy by any means of the imagination and he knew that. He could have protected her from a distance but instead he decided to take the choice out of her hands, which didn't sit well with me.

Evangeline was so sweet, had a bad childhood and deserved better than she got. She finally had her life the way she wanted it and owned a bakery that was doing well. She finally had her freedom and independence and then he walked into her shop and turned her world upside down. Evangeline is being bothered by a leopard who wants to bring her back home but she wants nothing to do with him and his plans for her. He's not willing to take no for an answer and gets violent with her. In steps Alonzo and saves her from this jerk. Even though he's intimidating and doesn't say much, the more he comes in her shop the more she feels for him.

Alonzo comes from a mafia like family. His life is what you would expect a mob bosses life to be like. People are after him and his family and friends get caught in the cross fire. Although there's a lot of mafia type action going on, there's also a nice love story and I think that's what really made this book work for me. Both the action and the romance made for a really interesting combination that worked well together. I also liked how Evangeline's leopard, Bebe would talk to her and reassure her when things got crazy.

Leopard's are highly sexed and it seems like the males are worst than the females. Alonzo had sex with a lot of women but his leopard is a little crazy and always wanted to kill the females afterwards, until he meets Evangeline. She seems to calm his leopard, which is one of the reasons he kept coming back to her shop.

Evangeline seems so mild mannered and sweet, but I loved how she was ready to protect those she cared about and how her calm personality gives way to her hot temper when the need arises. When the need arises, she acts to save those that mean the most to her and although that really angers Alonzo, she isn't going to let that stop her.

I wanted to like Alonzo, I really did. In the beginning we see why he is the way he is and we see him loosen up a bit but he's so bossy, and just takes over not giving her a choice and that really irritated me. I just never liked him.

If you've been reading the Leopard series then you know what to expect. This was another good addition to the series and well worth the read.

I give this book 4 sheep

GIVEAWAY
print copy of Wild Cat
US ONLY