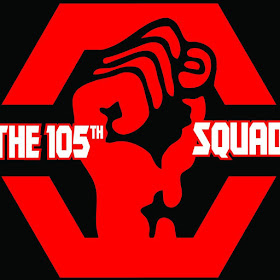 Sharon: Welcome to the flock! Have a moon pie and this *shoves cup of blue liquid in Aaron’s face* Don’t ask, just drink…

Aaron: Thanks I like Moon Pies, the banana flavored one are my favorite. And the blue liquid is also my favorite. Blue Raspberry or Squid, i don’t know.

Sharon: Can you tell our followers what The 105th Squad is? And where the name came from?
Aaron: The 105th Squad is a multi-genre costuming charity and, while originally formed by cosplayers - for cosplayers, now welcomes all costumers, prop builders, photographers, and general fans of cosplay. This adventure started back in 2011 after our founding member, James, returned from a father-son trip to Star Wars Celebration V. The experience was moving to say the least: he could not decide if watching kids light up around so many costumed fans was more amazing than the work that went into the costumes.

During his time at Celebration V, James learned that there were many different costuming groups, most of which were devoted a specific fandom. Upon returning, he decided to become part of this unique population. Unfortunately, learning how to make a costume was not as easy as originally thought. Who would have thought that a group that made so many people happy and inspired to join would keep so many secrets and not be willing to share their expertise? It is said that frustration is the mother of invention; thus The 105th Squad was born.

Sharon: How would someone find a group to join?
Aaron: We call out groups ‘Hives’. Our main facebook page (link) has info about all the Hives. You can find out about the Hives in Durham, Winston Salem, Phoenix, and other up-coming Hives.

Sharon: What goes on at your meetings?
Aaron: We call our monthly meetings ‘Build Parties’. At the Durham Hive we normally have around 30 to 50 people attend. We all work on our own projects. You can get help working on your projects. You can watch other people use the weirdest of items to make the most amazing of things. You can ask people questions. There are a lot of experienced crafters in The 105th Squad. And they are willing to help you with your project. 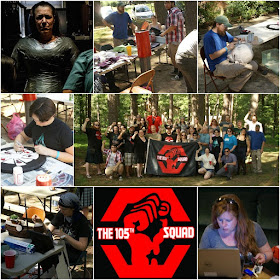 At one of my first build parties I watched a woman carefully cut beautiful blue glitter-y scrapbooking paper into small strips. She did this for a long time. She made a lot of strips. I finally worked up the courage to ask this person, what she was doing. She was making the Elsa dress from Frozen. She was covering a dress top in this paper to get the effect she wanted. The final dress was amazing. If you saw it you would never think it was made of scrap booking paper. Here is her cosplay facebook page (link). Check her out. 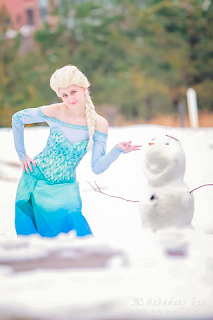 Sharon: How did you get involved?
Aaron: I attended a Maker’s Faire. The 105th Squad had a booth. I stopped by. I asked a lot of questions. I received a lot of information. I asked a ton of questions about the props they were displaying. They easily answered every question. Shortly after that I stepped into cosplay. I competed in a costume competition. I ended up being awarded 3rd place. I did some fact checking and found out that many of the contestants were in The 105th Squad. I decided to sign up. I wanted to get better at cosplay. I figured this group could help. 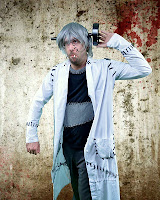 Sharon: What was your first cosplay?
Aaron: My first cosplay is Professor Stein from Soul Eater. I made it for Animazement 2014. I had no idea what I was doing it while making it. I learned a lot about sewing machines and headbands.

Sharon: Your favorite?
Aaron: To me, this was the hardest. I don’t know. I have made many costumes. Some had complicated moving parts. Some had armour. Some had fun electronics. Some I made a lot of clothing. But I think my favorite one is DJ-PON3. He is a character from My Little Pony:Friendship is Magic. He is a pony who always bring the energy and positive vibes to all the other ponies. It isn’t the flashiest cosplay. It wasn’t the hardest to make. But it meant a lot to me. 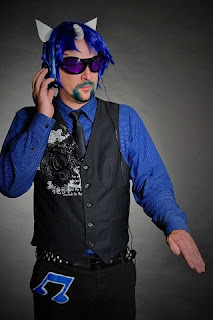 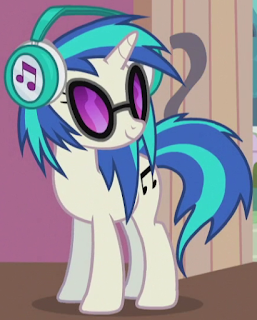 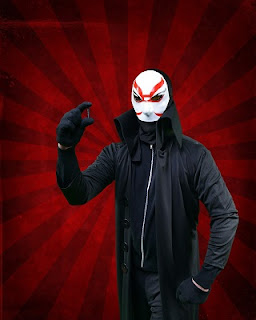 Sharon: Hardest to create?
Aaron: The hardest cosplay for me to make was Yokai from the Disney movie Big Hero 6. Two aspects of that cosplay were very difficult for me.

Also the mask. I wanted the mask to be super smooth and shiny, just like in the movie. Well I tried multiple techniques. I spent all of my free time for 4 weeks on the mask. I kept throwing technique after technique at it. And it just kept looking … worse. So Wednesday before a convention I was planning on attending on Saturday, I purchased a special type of plastic called terraflex. Now terraflex is a thermoplastics. And thermoplastics are special plastics that you can easily mold and shape at home. So after failing for a long time I was able to make the above mask in 2 days. I will say I like that mask.
Sharon: What kind of experts do you have in the Durham Hive? How many members?
Aaron: Expert is a fun word. I will say that someone is an expert in a area if they know more then me in a certain area. I see lots of experts. The Durham Hive has many experts in many fields of crafting; sewing, foam smithing, leather, metal-working, mold making and casting, make up, wig work, paper working, and many many more. If you need help in any crafting, there is someone who will help you. And often there are multiple people who will help you. And they are often from different backgrounds. So if you want to accomplish a specific goal, say you want to make a Captain America shield, you will often find multiple methods to accomplish it. I find that helpful. 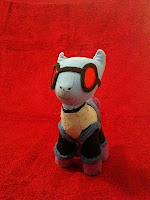 Sharon: What is the nerdiest thing you own?
Aaron: You have asked a lot of good questions. To me this was the easiest. These are pictures of Mr. Freeze Pony. He is a Mr. Freeze from Batman: The Animated Adventures if he was a small plushie pony. He is a gift from a very special person. His special-ness is beyond my capacity to explain. He is my con buddy. I take him to all my cons. He often goes on fields trips. He has his own facebook page, with some friends of his (link). Sometimes he goes on his own adventures. He attended a panel at C2E2 in Chicago this year. He walked in the Dragon Con parade in Atlanta. He tries to inspired people. He has tried to help many people. He is easily the most amazing thing I own. 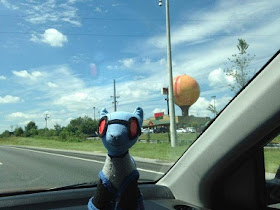 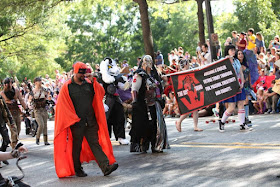 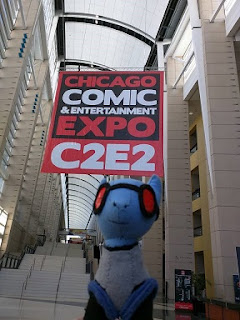 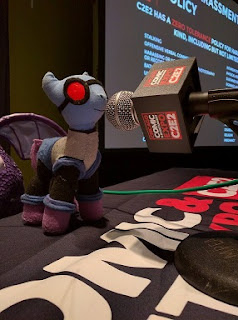