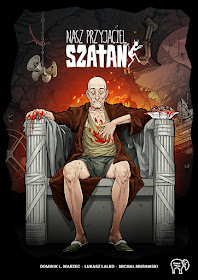 Number of pages : 120
Size : 210  x295 mm
Binding : Paperback
Printing : color
ISBN-13 : 9788365527257
website
Prince of Darkness is going through a midlife crisis. He can not meet the inflated expectations of the modern world. He spends his nights roaming the Hell in a bathrobe and drowning sorrows in vodka. However, a meeting with disillusioned Satanists becomes the straw that poured camel's back. Satan suing the Catholic Church for libel and travels to Earth to clear his name in court.

I ran across the Our Friend Satan's Kickstarter project over the summer and after reading the first 20 pages I knew I wanted to help support it. The concept began as a screenplay, but there wasn't enough money to follow through. The creators had enough storyboard material to make a graphic novel instead.

You can read the first 24 pages here

I really liked the premise: Satan is suing the Catholic Church for deformation of character. But the Pope thinks Satan is no longer scary enough to drive people to the church and he has an idea for a bigger, badder, mechanical Satan. While Satan is on Earth for his trial, hell is being run by Satan's top security officer, Beelzebub. There is the idea that if they can clean hell up a bit, they might get a vacation. And this is where "Scooter" comes in...a robotic vacuum cleaner. Problem is, Scooter becomes sentient and then all *cough* hell *cough* breaks loose!

The story is well written and much more complex than I thought, with mulitple plot threads running simultaneously. The artwork is sharp and bright with an emphasis on facial expressions.

Unfortunately, you can't get Our Friend Satan in English, yet! I got a copy because it was a kickstarter special. The creators are looking for a publisher for the US market for release in 2017. You can read the first 20 pages, in English here. Be sure to keep this one on your radar.

5 "Who uses tentacles and horns?" Sheep

About the Creators:
website-FB-twitter 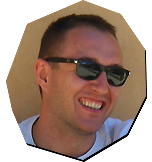 Dominik L. MARCH
idea, script, artistic director
Brain satanic worship. Polish lives in Gotham City - Lodz. I never planned to do comics, but the Prince of Darkness was not proper to refuse. During the day, wandering aimlessly, searching for the meaning of life (and chestnut). At night, he leads a crusade condemned the infernal abyss.

ŁUKASZ Lalko
color, sketch, outline, special effects
Space traveler, being a senior (Poznan). He joined us to art to fill the void left by the bodies, which had lost in the Andromeda. In his youth he was mainly interested in the disintegration of the planet, today focuses on drawing (read: everything will git until he finished his crayons).