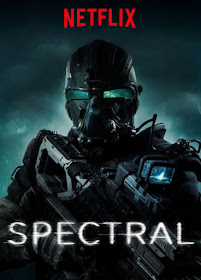 1h 47min
Action, Sci-Fi, Thriller
A sci-fi/thriller story centered on a special-ops team that is dispatched to fight supernatural beings.

This was a pleasant surprise! Spectral was originally made by Universal as a 3D movie for theatrical release, but was dropped and Netflix picked it up. This would have been pretty awesome to see in 3D. It is military tactical action packed movie with a supernatural (or is it?) twist. Right off the bat I was impressed with the quality of the movie and effects. Honestly I couldn't tell what was CGI background and what was real. It was so life like. You felt like you were in a war torn city fighting for your life. Even though this isn't based on a video game, like Call of Duty, it seemed like it was.

The story was solid, as solid as a scifi film can be, it brings up the whole "just because we can, doesn't mean we should" moral argument, and there is a twist at the end. If you are a fan of shooter video games or military action or scifi, you'll enjoy this one!