Spotlight and Excerpt: The Forests Of Dru (Sorcerous Moons book 4) by Jeffe Kennedy 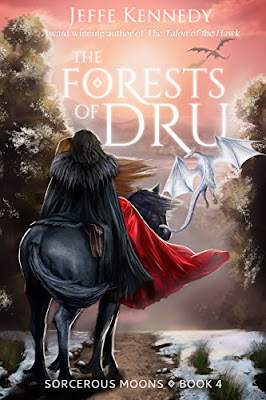 The Forests Of Dru (Sorcerous Moons book 4)
by Jeffe Kennedy
January 24, 2017
180 pages
An Enemy Land
Once Princess Oria spun wicked daydreams from the legends of sorceresses kidnapped by the barbarian Destrye. Now, though she’s come willingly, she finds herself in a mirror of the old tales: the king’s foreign trophy of war, starved of magic, surrounded by snowy forest and hostile strangers. But this place has secrets, too—and Oria must learn them quickly if she is to survive.

A Treacherous Court
Instead of the refuge he sought, King Lonen finds his homeland desperate and angry, simmering with distrust of his wife. With open challenge to his rule, he knows he and Oria—the warrior wounded and weak, the sorceress wrung dry of power—must somehow make a display of might. And despite the desire that threatens to undo them both, he still cannot so much as brush her skin.

A Fight for the Future
With war looming and nowhere left to run, Lonen and Oria must use every intrigue and instinct they can devise: to plumb Dru’s mysteries, to protect their people—and to hold fast to each other. Because they know better than any what terrifying trial awaits…
amazon-Other Buy links

Excerpt:
“We won the war and this is still the best the king’s table can command?”

Nolan poked at the meat with a sour scowl, and Arnon clapped him on the shoulder. “Not much of a homecoming, huh? You could have brought us game from the far forests and done better.”

“I brought the King of the Destrye instead.” Nolan shrugged him off. “That seemed more useful at the time.”

Lonen, that selfsame King of the Destrye, didn’t adjust his position to ease his aching side, lest his brother misinterpret that as a sign of discomfort with the topic of conversation. Nor did he miss the sidelong glance from Nolan that suggested he might be reconsidering Lonen’s inherent usefulness. Not that Lonen could argue much otherwise. Being laid up in bed recuperating for more than a week didn’t lend itself to high-profile—or even marginally effective—rule. Nevertheless, some remnant of his youthful self cringed, wishing he could do something to earn his older brother’s approval rather than his scorn.

Mostly, though, he longed to be back in that bed, under the furs with Oria, sharing her warmth, basking in the surety that she slept beside him. To be there when the strange dreams woke her.

Oria hadn’t wanted him to be up and about yet, but Nolan—believed lost in battle, now miraculously returned and restless with unsatisfied expectations—had decided he’d waited long enough for explanations. Rather than risk having Nolan barge into his bedchamber and interrogate Oria, Lonen had conceded to the lesser of the evils and gotten himself to this private dinner with his two remaining brothers. The last three of Archimago’s line, sadly diminished in robustness of every kind.

But three was one more than they’d thought they had.

That had to be a good thing. A blessing from Arill herself. Somehow, though, under the sharp scrutiny of Nolan’s piercing blue stare, Lonen nursed a few doubts.

He gave in and shifted, easing the pinch in his gut. The infection no longer poisoned him, but the massive tissue damage had yet to replace itself—however much ever would—despite Oria’s foolhardy attempt to give her life to heal him. That side of his body sagged inward, as if part of him had been carved out.

Which, come to think of it, it pretty much had.

With a grimace for that, he forced himself to finish the slice of stringy roast on his plate, then picked up his warmed wine and drank, hoping to mute some of the ache.

“It’s not good for you to be upright in a chair like this,” Arnon said, frowning at him. “I can see it pains you.”

“Father would say a warrior can suffer far more than a bit of pain, especially in the service of Dru,” Nolan replied, gaze never wavering from Lonen. “He would have expected his successor to be sitting the throne and handling the pressing issues of the Destrye, not lying abed with a foreign mistress.”

“You mean Her Highness, Oria, Queen of the Destrye?” Lonen didn’t raise his voice, but his tone carried all the iron resolve of his battle-axe. Enough that Nolan sat back slightly, a hint of surprise flickering through his eyes before they sharpened again. That’s right. I am not the same little brother you knew before the war. He might not be ruling impressively, but neither was he a pushover. Not anymore.

“She is Báran,” Nolan said flatly, tempting Lonen to remark on his brother’s powers of observation. But this was no time for levity. This conversation had been a long time coming and Nolan clearly intended to have it out now. So be it—and Arill hold him in her hand for this battle.

“I’m fully aware of that, Nolan, as I met her in Bára, where she is in fact, a princess and should be queen of her people by her own right.”

“What exactly happened there?” Arnon put in, full of curiosity. “What?” He gave Nolan’s frown a scowl of his own. “You’re not the only one who’s been sitting on questions while Lonen concentrated on not dying,” he added pointedly. “You’ve dragged him out of bed for this, so we might as well get the whole story.”

About the Author:
website-FB-twitter-blog
Jeffe Kennedy is an award-winning author whose works include non-fiction, poetry, short fiction, and novels. She has been a Ucross Foundation Fellow, received the Wyoming Arts Council Fellowship for Poetry, and was awarded a Frank Nelson Doubleday Memorial Award. Her essays have appeared in many publications, including Redbook.

Jeffe can be found online at her website: JeffeKennedy.com, every Sunday at the popular SFF Seven blog, on Facebook, on Goodreads and pretty much constantly on Twitter @jeffekennedy. She is represented by Connor Goldsmith of Fuse Literary.