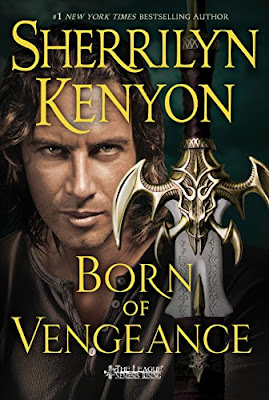 Bastien Cabarro survived the brutal slaughter of his entire family only to have his wife pin their murders on him. Made Ravin by The League, he is now a target for their assassins-in-training to hunt and kill. The average life expectancy for such beings is six weeks. But defying the odds is what this Gyron Force officer does best, and Bastien won’t rest until he lays his betrayers in their graves.

Ten years later, he has one chance to balance the scales of justice, provided he relies on his former wingman— the very sister of the woman who testified against him.

Major Ember Wyldestarrin joined the outlaw Tavali the day Kirovar fell into the hands of a tyrant, and she and her team were left on an outpost to die under a barrage of enemy fire. The last thing she wants is to be involved in politics again. But if she doesn’t bring Bastien in, her sister will pay the ultimate price. Now she has to find some way to betray her former wingman (and fiance) before he catches on and kills her. Even so, treachery doesn’t come easy to a woman who took a loyalty oath to protect her homeworld and comrades-in-arms.

Yet as she tries to do right by her family, she learns that Bastien doesn’t just hold the key to the fate of Kirovar, he is vital to The Sentella-League war, and to the entire Tavali nation. If she hands him over, three nations fall. If she doesn’t, her entire family dies. Their fates are all in her hands, and time for all of them is quickly running out.

Bastien Cabarro is the only survivor of his family. They were brutally slaughtered and Bastien’s wife pinned the murders on him. Bastien is then made Ravin by The League, basically he’s target practice for assassins in training. Normally, the targets only last six weeks but Bastien is a survivor and ten years later has the perfect opportunity to get vengeance on those who betrayed him, except to do that he has to work with his former wingman Major Ember Wyldestarrin, who also happens to be the sister of the woman who testified against him. Ember on the other hand has been tasked with bringing Bastien in or else her entire family dies.

I’ve been a longtime fan of Sherrilyn Kenyon’s books but I also admit I’ve slacked off on The League series so I wanted to see if it is possible to just jump into this series midway and not get lost.

The answer is yes but there’s a price to being able to be read Born in Vengeance as a standalone in a series this far in. Especially if you haven’t missed a book.

Kenyon is a superb storyteller there’s no denying that, but I can’t help feel like in an effort to attract new fans, she’s letting longtime fans down by spending too much time rehashing the events of the previous books so that new fans won’t feel lost. Because of that, the quality of Born in Vengeance wasn’t all that impressive to me. There was less new content for readers to enjoy. I may have missed out on a few books in this series but I certainly recognized events from the first few books that I did read. I wanted and expected a brand new story, not a retelling of the series with a few new scenes here and there. There was also quite a bit of back and forth timeline jumping that I could have done without.

To be fair though, Bastien and Ember were two interesting characters. I always love to see a female character in a role that men would normally occupy. Ember is a fighter, she’s a leader, not a follower and I loved that. She was a strong character who wasn’t without faults but still managed to convince me to believe in her. The same with Bastien, he was a broken, angry man but I believed in him. I wanted him to get his revenge (Yes, I’m bloodthirsty that way). I just wish that Born in Vengeance focused more on Bastien and Ember than playing catch up.

All in all Born in Vengeance wasn’t a bad book if you’re new to Kenyon. However it was a bit of a letdown for me as a longtime fan and I have talked to other fans who felt the same way. I hope that Ms. Kenyon’s next book will remember her established fan base because then she can get back to that high quality of writing I remember from her earlier books.

About the Author:
website-FB-twitter
The #1 New York Times bestselling author, Sherrilyn Kenyon, who is proud of her mixed Cherokee heritage, lives a life of extraordinary danger… as does any woman with three sons, a husband, a menagerie of pets and a collection of swords that all of the above have a major fixation with. But when not running interference (or dashing off to the emergency room), she’s found chained to her computer where she likes to play with all her imaginary friends. With tens of millions of her books in print, in over one hundred countries, she certainly has a lot of friends to play with too.

In the last few years, she has placed more than 75 novels on the New York Times list in all formats including manga. This extraordinary bestseller continues to top every genre she writes, including young adult, manga, fantasy, science fiction and horror. Her current series include: The Dark-Hunters, The League, Lords of Avalon and Chronicles of Nick.

Her Lords of Avalon novels have been adapted by Marvel, her Dark-Hunter novels are a New York Times bestselling manga published by St. Martins. and the Chronicles of Nick manga are published by Yen Press. And keep your eyes pealed, her books are soon to be hitting both the big and little screens by the same group who specializes in turning beloved literary series into major movie franchises.
Sharon Stogner at 6:00 AM
Share