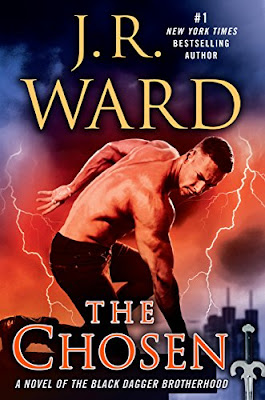 Xcor, leader of the Band of Bastards, convicted of treason against the Blind King, is facing a brutal interrogation and torturous death at the hands of the Black Dagger Brotherhood. Yet after a life marked by cruelty and evil deeds, he accepts his soldier’s fate, his sole regret the loss of a sacred female who was never his: the Chosen Layla.

Layla alone knows the truth that will save Xcor’s life. But revealing his sacrifice and his hidden heritage will expose them both and destroy everything Layla holds dear—even her role of mother to her precious young. Torn between love and loyalty, she must summon the courage to stand up against the only family she has for the only man she will ever love. Yet even if Xcor is somehow granted a reprieve, he and Layla would have to confront a graver challenge: bridging the chasm that divides their worlds without paving the way for a future of even greater war, desolation, and death.

As a dangerous old enemy returns to Caldwell, and the identity of a new deity is revealed, nothing is certain or safe in the world of the Black Dagger Brotherhood, not even true love . . . or destinies that have long seemed set in stone.

Layla knows that she can’t love Xcor, but can’t seem to help herself. She doesn’t know what to do to save him from a horrible death at the hands of the Black Dagger Brotherhood. Layla puts everything on the line to try and help him.

The chemistry between Xcor and Layla is incredible. You can’t decide whether you should hate him or cheer for him. Beware, there are some shockers ahead in this installment that you won’t believe! Ward’s books are so well thought out and written, it makes reading them such a pleasure. If you are a fan of this series don’t miss this installment. If you’ve never read the Black Dagger Brotherhood I highly suggest you do, you won’t be disappointed.

There were at least three side stories started in this book that didn’t go anywhere. My guess is that Ward was laying the groundwork for future stories, but it was slightly distracting since it pulled the focus from the main story and left you wondering what was going on with each of them. Hopefully, some of these stories will come sooner rather than later and won’t leave us hanging for long.

About the Author:
website-FB-twitter
J.R. Ward is the number one New York Times bestselling author of the Black Dagger Brotherhood series of vampire books. She is a winner of the prestigious Romance Writers of America RITA award for Best Paranormal Romance and is a multiple RITA nominee. A graduate of Smith College, she was a double major in History and Art History with a medieval concentration in both and she still longs at times for a return to those days sitting in dark lecture halls, looking at slides of old triptychs and reliquaries. Prior to becoming a full time writer, she was a corporate attorney, serving for many years as the Chief of Staff of one of Harvard Medical Schools premier teaching sites. Her idea of absolute heaven is a day filled with nothing but her computer, her dog and her coffee pot and the Brothers, of course.