Book Review: Initiation: Book 1 The School of Exorcists (YA paranormal romance and adventure) by K.E. O'Connor 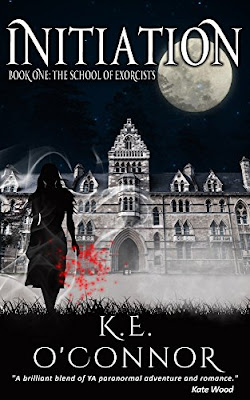 Initiation: Book 1 The School of Exorcists (A YA paranormal romance and adventure)

Ruby Carmichael is your typical teenage girl, trying to ignore the unusual fact she sees ghosts. After she almost kills someone, she discovers she isn't so typical and has abilities and responsibilities she's never dreamed of.

After almost ending the life of her school crush at a dance, Ruby is humiliated and confused. She isn't prepared for the revelation that she's fated to join the School of Exorcists, a mysterious school that trains young Senders in the art of crossing over the undead and protecting the world from dark magic forces.

In this fast paced teen and YA paranormal romance and adventure series, Ruby meets Andreas, an undead member of the School, who introduces her to the weird and magically freaky world of the School of Exorcists.

It's not long before Ruby also meets Zander Ford and falls in love. The road to happiness is thwarted by unstable ghosts, dark magic crazed family members and Ruby's own fears that magic and romance don't combine well.

There's also the issue of Jarrod Deveral, a handsome but dangerous magic using soul freezer, who lingers in Ruby's mind. With the romance heating up between Ruby and Zander, she can't ignore the issue that her birth parents are causing trouble by using dark magic.

But when Ruby and her new friends come under attack from dark magic, she must draw on her new found powers to save herself and the School she has grown to love.
amazon

I just finished reading this author's other YA series and thoroughly enjoyed it. This book has a similar flavor. Easy read, great main character who is spunky, resourceful, humble but strong.

As I am reading I get flashbacks of the "Harry Potter" books. Ruby is taken from her adopted human home and sent to a "magical" school. She apparently is the "One" everyone has been waiting for to save the world from the dark magic practitioners. She has been seeing and speaking with the "undead" since she was young and now at 16 (soon to be 17) her skills have left the magical community no choice but to bring her in before the dark side claims her. Her main talent is "sending" the undead to pass through to the other side.

Once at the school she makes a core group of friends, develops a serious attraction to another student and uncovers her birth history and her destiny. There are definitely relatable trials and tribulations of most high school age readers and many times I wanted to pull her out of the book and say: "Open your eyes! Don't be so naive!" But of course....that couldn't happen and I had to continue seeing too many mistakes that put her in danger.

There were some sentence structures that struck me as weird but nothing that distracted from the story. I felt drawn to read this every chance I had and finished it quickly. I think this is another YA hit series and I have already started on book 2. (Just a sneak review...the 2nd book escalates the danger and romance problems! But start with Book 1) 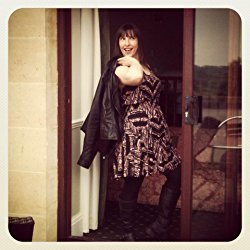 About the Author:
website-FB-twitter
The writer of over 20 books in the paranormal adventure, urban fantasy, and cozy mystery genres. Her writing has mystery, adventure, excitement, and romance. She loves to make up new worlds and characters, and share stories for others to enjoy. She does this while hiding in her castle with a limitless supply of books, tea, cakes, and her many familiars (animals feature in most of her work.)


K.E. O'Connor loves reading anything that quickens her pulse and makes her fall in love with the characters. Her writing does the same. She has numerous series: The School of Exorcists, Ghost Academy, Heir Hunters, Lorna Shadow Cozy Ghost Mysteries and The Old Sarum Witch Mysteries.

Find out more at www.keoconnor.com (and get loads of free books.)
Sharon Stogner at 5:44 AM
Share