Character Post: The Rogue Who Got Away...Ghost Wolf (Wolves of Willow Bend Book 12) by Heather Long

The Rogue Who Got Away
Julian, Chief Enforcer of all North American packs

The hunt for Dallas Dalton has become a legend amongst the Enforcers. A tall tale exchanged over one too many drinks. How many Rogues managed to evade one Enforcer, much less all of them? She’d earned her place in the annals of our history, and I didn’t begrudge her the spot.

Not when I was part of the problem. Twenty-two some odd years ago, when I first issued the warrant to locate her, I restricted the Enforcers to only detaining her, if they could, without harm. Otherwise, they were merely to follow and observe as well as contact me immediately.

I received a handful of calls over the years alerting me to her presence. More than once, I was on the wrong side of the country to act with any alacrity. Give Dallas a minute, and she can turn it into a hundred mile head start. What most of the Enforcers didn’t know about Dallas was how exceptionally clever she was, and how patient.

Then again, how could they? None alive had met her—or they hadn’t, until a month ago when John Nelson and Hadley Sexton reported her visit to the house outside of Eugene. I knew every speck of the landscape and every inch of the house. I knew she’d been there over the years—never long enough for me to act on it—and I couldn’t afford to merely wait there for her to appear once more.

Sending John and Hadley to the house served two goals—the first, it got them off the grid. Foreign wolves hunting the packs and murdering my Enforcers had gone on too long. I would lose no others. They would have time to recover at the house, and if we were lucky—or unlucky, depending on how you look at it—they would see Dallas.

She showed up, and she gave us a very vital clue in determining how the Volchitsa communicated—a line we would never have discovered without her. Being forced to label her assistance as invaluable did not allow for the absolution of her crimes. Yet, no matter how I examine the data, I arrive at the same conclusion repeatedly.

I need to contact Dallas Dalton. I need to speak to her. She has avoided me for more than two decades, but her daughter is safely ensconced in Willow Bend. Chrystal is also a terrible liar, so I know she’s been in touch with her mother.

Now I must call her and request a meeting…but am I truly doing this for the packs and security or because I simply want to see her again?

No matter how many times I ask myself the same question, I return to the beginning. Wolves are dying. We cannot wage war if we cannot find our enemy or at least identify why the enemy is after us in the first place.

Dallas could have those answers.

My feelings on the subject are irrelevant.

My pride is irrelevant.

What did it matter if I had to excise my own heart to save the packs? I’m the Chief Enforcer, my first oath must always be to them. 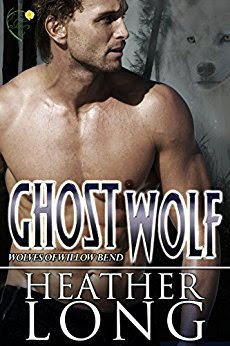 Ghost Wolf (Wolves of Willow Bend Book 12)
by Heather Long
April 25, 2017
338 pages
It's the book you've been waiting for! Don't miss the stunning conclusion to the Guardians of the Wolves!

Julian has been juggling the conflict without a real target for months, they always seem to be just one step behind the Volchitsa and even the wolves they’ve captured can’t tell them enough. With the fate of the packs resting squarely on his shoulders, Julian, the Chief Enforcer, will swallow his pride to seek out the one wolf he knows can help them all, the one who seems to know all the players, who can think like them…if anyone can find the Volchitsa it’s the ghost he’s hunted for decades…
amazon-kobo-BN

About the Author:
Website | Facebook | Twitter
Goodreads | Amazon
National bestselling author, Heather Long, likes long walks in the park, science fiction, superheroes, Marines, and men who aren’t douche bags. Her books are filled with heroes and heroines tangled in romance as hot as Texas summertime. From paranormal historical westerns to contemporary military romance, Heather might switch genres, but one thing is true in all of her stories—her characters drive the books. When she’s not wrangling her menagerie of animals, she devotes her time to family and friends she considers family. She believes if you like your heroes so real you could lick the grit off their chest, and your heroines so likable, you’re sure you’ve been friends with women just like them, you’ll enjoy her worlds as much as she does.
Sharon Stogner at 12:30 AM
Share