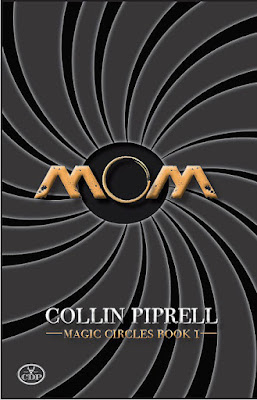 A GOD IS BORN!

TOO BAD ABOUT THE PERSONALITY DISORDER

So reads the graffito.

MOM is the mall operations manager — the greatest intelligence in history, a machine awakened to self-awareness at a time when the last few human survivors have withdrawn to the last two remaining refuges on Earth. Quarantined from the global nanobot superorganism outside the malls and from each other inside, the mallsters are utterly dependent on MOM for everything — including the ever-more suspect information they're getting about the world Outside.

Now the malls are crumbling.

Some larger skewedness is lending a hallucinatory edge to things. Cisco believes it’s inside his head, at first—attributes it to the incessant ﬂicker and ﬂash and the crash of classic rock ’n’ roll. The dancers are stepping back and forth, back and forth, over and over, faster and faster, caught in a local loop. Leary and Brian are still there at the wraparound bar.

“Where’s Bia?” Cisco yells at them as he approaches.

“You young fellers,” says Leary. “You mean to say you’ve gone and misplaced her?”

“Was she good?” Brian leers. The music has suddenly stopped, so this query comes across loud and clear. Then the lights come up and everything holds still, a ﬂuorescent morgue.

“A go-go bar with bright lights and no music,” says Leary. “What a cockroach feels like caught out in the open.”

Things are going awry. Cisco’s senses of place and balance tell him he’s moving, though in fact he’s standing at the bar. He glimpses an evil grin just before Brian wheels his chair around and heads off towards the back of the bar. Leary is looking uncharacteristically apprehensive. Things are fast going to hell. Cisco hasn’t seen this type of disintegration in a long time, even in drills. Today’s Worlds are supposed to have intregral fail-safes. Nevertheless, Cisco expects the nausea and handles it. Leary doesn’t look well, but he seems to be under control. “This isn’t good,” he manages to say before a blast of music drowns him out.

It’s interesting, from a technical point of view. Spotlit in the gloom at the far end of the stage a good ten meters away, Cisco can see, in exquisite detail, a constellation of pink and blue and gold glitter stuck to a dancer’s bare backside. But the ﬂoor at his feet has gone indistinct, a featureless mystery. Then, when he looks up again, he can’t even see the girl, or the end of the stage. The ﬂashing red light that marks the toilet is only a pulsing smudge.

Cisco checks back to the near distance, and now the detail is surreal. Cisco ﬁghts down another twinge of nausea. The spatio-temporal axes are badly askew. He looks away from it all to collect himself; he focuses on the ﬂoor in time to see the roach hit-and-run victim reconstitute itself, its mess all coming together from the smear. Sporting a single bit of red glitter on its carapace, it scuttles backwards to disappear amid the debris. Cisco is gripped by the strongest sense of déjà vu he’s ever experienced. He sees Leary deck the burly tourist, the same guy as before, the same wham-wham-wham combination except this time from a different perspective. The ebee jerk drops his beer bottle, and Cisco hears the smash from behind the bar—the visual and spacialized auditory cues are out of whack. Two or more different pieces of music are blaring. The beats accelerate, subtly at ﬁrst, then faster, and Cisco resists the natural inclination of the heart to race in sympathy. An instant later the beer reappears on the bar. The guy drops it again, and it smashes. This time the sound comes from where it should. Cisco watches as the shards reassemble themselves and the beer is sucked back into the bottle. He ducks at the smash coming from just above and behind his head. The bottle smashes and reassembles, smashes and reassembles. The sound is coming from random points, no longer in phase with the visual representation of the bottle’s impact.

The World is falling to pieces. Rapid foreground-background reversals are being complicated by phase dissonances and fractal oscillations. This is chaos. Cisco can’t tell whether the motion-and-perspective trackers are functioning; even if they are, they wouldn’t be able to make sense of this. Bangkok World is fast disintegrating, reality engines on a runaway track to total dementia. Part of it brieﬂy resolves itself as a bargirl wobbling past on platform boots—maybe a real telep, given that she appears to be panicking—though the sound of her passing doesn’t even register, much less include reverb. A scream issues from Cisco’s shirt pocket, some woman expressing acute distress, although Cisco knows she isn’t really in his pocket.

He can bail anytime he wants to, but he doesn’t want to yet. He falls against a barstool and clips his forehead on the bar top. There’s pain, lots of it. More psychic than physical, but liberal doses of both. He shuts his eyes, pulls closer to his center. This is only a perceptual thing, this assault on his integrity. He can handle it. He knows he’s actually safe and sound back in his own cradle in ESUSA. He knows this, but it doesn’t reassure him as much as it ought to.

He looks for his console, just so he knows it’s there. It isn’t.

About the Author:
Website-FB-Twitter
Collin Piprell is a Canadian writer and editor resident in Thailand. He is the author of four previous novels and a collection of humorous stories, now out of print, as well as four books on national parks, diving, and coral reefs, which are also out of print. *MOM* is the first novel of Magic Circles, a science-fiction trilogy in progress. Visit www.collinpiprell.com to learn more. 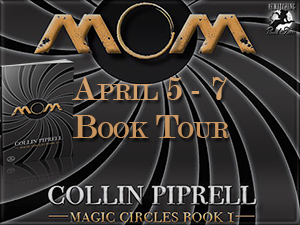