How to train your (changeling) dragon
by Melody Steiner

I’ve become a bit of an expert in dragon changelings, so in honor of Slither’s release, I thought it might be helpful to create a set of instructions for anyone wishing to tame their own Wild Menaces.

Step #1: Do your research before engaging! Read up on changelings, their special abilities and food preferences. They have weaknesses—make a note of those.

Step #2: Lure your changeling dragon into a cave as a human. Make sure you have lots of spaces to hide in for when he loses his temper, changes, and tries to blast you with fire.

Step #3: Scramble up his neck and hang onto his mane. Most changelings can’t reach behind them.

Step #4: Hang on tight. The changeling might try to knock you off or slam you into things. Don’t let go.

Step #5: He may try to fly. If he does escape the caves and get loose, be prepared. Changelings are jerks and like to try sneaky methods of losing you like dropping quickly so you lose your grip.

Step #6: When he’s all tuckered out, he’ll probably land someplace like a beach or a cliff and take a nap.

Step #7: If you’re still there when he wakes up, he’ll assume you’re stuck with him for life and will then tolerate you for a while.

Step #8: You can ingratiate yourself to him by cooking for him. Dragons are pretty lazy. Especially changelings. He’ll get used to you doing all the cooking and just let you live.

Step #10: Congratulations. If you complete steps 1-9, you’ll have successfully trained your dragon. Not only will he let you live, but he may actually be nice to you from time to time. Plus, free rides! 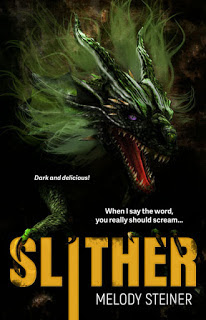 When the changeling dragon, Adom, demands that Elanor come with him to the mainland on a secret mission, she sees this the opportunity she’s been waiting for—a chance to exact her revenge. But when his actions take a surprising twist, Elanor begins to suspect that maybe things are not as they seem.

With a plot brewing against the mainland king, alliances are tested and Elanor discovers a secret that will forever change the way she views the slithering dragons—and herself.

Excerpt:
“Forgive me,” he says. “But when I say the word, you really should scream.”

That’s all the warning I need. If Adom wants me to scream, he wants the others to think he’s hurting me. He wants to send fear shuddering down their monstrous, twisted spines, to dry their mouths and shrivel the pits of their cavernous stomachs. He wants to show them that he is the king, the master of this mountain, the master of me.

In the seconds it takes him to morph from human to dragon, his chest expanding, scales popping out of his skin like boils, I’m already at the door. I scream, just as he asks me to.

The full blast of flame doesn’t hit me, but it’s enough heat to sting my lower back. Good thing I tied my hair this morning—he misses singeing it off by a few inches. The monstrous roar he releases bursts a decanter on the table. The mirror cracks. But the fire inside me has nothing to do with Adom’s monster, and everything to do with my own.

Only mine burns for revenge.

About the Author:
website-FB-twitter
Melody Steiner is a novelist, librarian, warrior woman, and a mother. She grew up in a home where science fiction and fantasy were staples of the imagination. Her earliest novels were written in elementary school and involved rocket ships to the moon, alien life, and gumdrop kingdoms at war with other invading candy nations. Over the years, she found herself drawn to fantasy stories that empower female characters and particularly women of color. Currently, she’s based near Columbus, Ohio, along with her husband and the wild things they call “children.”
Her recent work, Slither, is a traditional fantasy about a young woman who is enslaved by a herd of dragons.