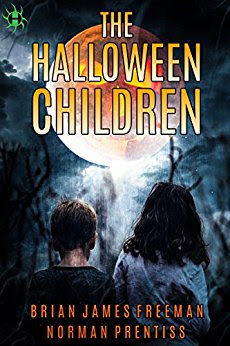 by Brian James Freeman and Norman Prentiss
June 13, 2017
Publisher: Hydra
ASN: 9781587676123
ISBN: B01NATQGW2
The accommodations at Stillbrook Apartments aren’t exactly glamorous, but they’re quiet, affordable, and well maintained. The handyman is usually available to help with a leak or a broken bulb, his wife and two adorable kids often tagging along. When occasion dictates, the neighbors gather to wish each other well and spread the requisite holiday cheer. Everything’s very nice. Very normal.

But as Halloween approaches, strange occurrences are happening all around Stillbrook. The children tell disturbing stories, bizarre noises bleed through the walls, and one abandoned unit is found to be inhabited by something sinister—something that’s no longer alive.

For the safety of the tenants, the Halloween party has been canceled. There will be no decorations or masks, no candied apples or witch’s brew. But without treats to divert the Halloween Children, they have no choice but to play some very nasty tricks.

Stillbrook Apartments seems like your normal, everyday apartment complex. The handyman they employ, Harris Naylor, is usually available to fix a leak, paint something, even get rid of pests for you (I mean, bugs, rats…). His wife, Lynn, works out of the home. The kids appear adorable. But as Halloween approaches and the apartment manager decides there will be no party that year and a controlled trick-or-treat situation, strange occurrences start to happen. The kids tell scary stories that not even a teenager would. A neighbor’s parrot ends up in Harris’s oven. A college student, Jessica Shephard, who moved there to attend a local university, sends odd emails to her boyfriend warning about the "Halloween children." A neighbor complains about noises coming from an empty apartment next to hers, then later, she makes complaining calls to Harris about a horrible odor. It all worsens as Harris and Lynn fight over their children, their marriage going downhill.

The novel is broken into three main points of view: Harris, his wife, Lynn, and email correspondences from the college student, Jessica.

The Halloween Children will have you looking at that trick-or-treater at your door differently. It will unsettle you enough to be a perfect Halloween tale read in October, though I read this during spring and it still unnerved me. "The Halloween Children are everywhere and they know our fears" - written in black marker on a bench outside the Stillbrook apartments. Apt words for this horror novel.

I give The Halloween Children 5 spooky sheep.

His essays, columns, and interviews have been published in The Stephen King Library Desk Calendar (Book of the Month Club), Jobs in Hell, Hellnotes, and Cemetery Dance. His non-fiction has been translated into French.

He is the general manager of Cemetery Dance Publications, the publisher of Lonely Road Books, and the founder of Books to Benefit.

Brian James Freeman lives in Pennsylvania with his wife, his sons, three cats, and two German Shorthaired Pointers. More books are on the way. 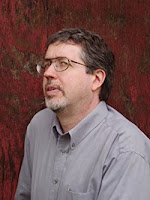 Norman Prentiss
website-FB-twitter
newsletter
Norman Prentiss is the author of LIFE IN A HAUNTED HOUSE and ODD ADVENTURES WITH YOUR OTHER FATHER (A Kindle Scout Selection), and he won the 2010 Bram Stoker Award for Superior Achievement in Long Fiction for INVISIBLE FENCES, published by Cemetery Dance (www.cemeterydance.com). He also won a 2009 Stoker for his short story, “In the Porches of My Ears,” published in POSTSCRIPTS 18. Other publications include THE BOOK OF BABY NAMES, THE FLESHLESS MAN, FOUR LEGS IN THE MORNING, THE HALLOWEEN CHILDREN (written with Brian James Freeman), and THE NARRATOR (written with Michael McBride), with story appearances in BLACK STATIC, DARK SCREAMS, BLOOD LITE 3, BEST HORROR OF THE YEAR, THE YEAR’S BEST DARK FANTASY AND HORROR, and in four editions of the SHIVERS anthology series. His poetry has appeared in WRITER ONLINE, SOUTHERN POETRY REVIEW, Baltimore’s CITY PAPER, and A SEA OF ALONE: POEMS FOR ALFRED HITCHCOCK.