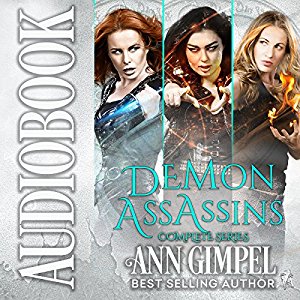 These books are also available as individual titles in e-book and print format.

Witch’s Bounty
One of three remaining demon assassin witches, Colleen is almost the last of her kind. Along with her familiar, a changeling spirit, she was hoping for a few months of quiet, running a small magicians’ supply store in Fairbanks, Alaska. Peace isn’t in the cards, though. Demons are raising hell in Seattle. She’s on her way to kick some serious demon ass, when a Sidhe shows up and demands she accompany him to England to quell a demon uprising.

Witch’s Bane
Demons strike in the midst of Colleen’s wedding, and Roz launches desperate measures. As she shape-shifts to keep one step ahead of evil, it takes her mind off her other problems. Personal ones. She burned through a couple of marriages and hooked up with a string of loser men before, after, and in between. Though she wants to be happy for Colleen, the jealousy bug bit deep.

In Roz’s secret heart, she’s attracted to Ronin, one of the Daoine Sidhe. He’s so profanely beautiful she can barely breathe around him, but he’s also headstrong and arrogant. Not good partner material – unless she wants to end up dusting her heart off one more time.

Witches Rule
Jenna’s a special witch, sort of, when her magic works, which it often doesn’t. Frustration about her limited power eats at her. It would be pathetic to get killed for lack of skills a teenager could master.

Tristan is a Sidhe warrior. He fell hard for Jenna, but hasn’t had an opportunity to act on the attraction beyond a few kisses. Kiernan is haunted by visions, particularly an apocalyptic sending that seems to be coming true. A confirmed bachelor, he doesn’t understand his attraction to Jenna, but it’s so strong he can’t fight it. After a while, he doesn’t even try, despite recognizing Tristan’s claim to her.

About the Author:
website-FB-twitter-blog
amazon
Ann Gimpel is a mountaineer at heart. Recently retired from a long career as a psychologist, she remembers many hours at her desk where her body may have been stuck inside four walls, but her soul was planning yet one more trip to the backcountry. Around the turn of the last century (that would be 2000, not 1900!), she managed to finagle moving to the Eastern Sierra, a mecca for those in love with the mountains. It was during long backcountry treks that Ann’s writing evolved. Unlike some who see the backcountry as an excuse to drag friends and relatives along, Ann prefers solitude. Stories always ran around in her head on those journeys, sometimes as a hedge against abject terror when challenging conditions made her fear for her life, sometimes for company. Eventually, she returned from a trip and sat down at the computer. Three months later, a five hundred page novel emerged. Oh, it wasn’t very good, but it was a beginning. And, she learned a lot between writing that novel and its sequel.

Around that time, a friend of hers suggested she try her hand at short stories. It didn’t take long before that first story found its way into print and they’ve been accepted pretty regularly since then. One of Ann’s passions has always been ecology, so her tales often have a green twist.

In addition to writing, Ann enjoys wilderness photography. She lugs pounds of camera equipment in her backpack to distant locales every year. A standing joke is that over ten percent of her pack weight is camera gear which means someone else has to carry the food! That someone is her husband. They’ve shared a life together for a very long time. Children, grandchildren and three wolf hybrids round out their family.