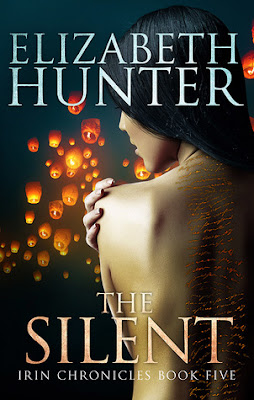 The Silent: (Irin Chronicles Book 5)
by Elizabeth Hunter
July 28th 2017
Pages: 336
They are called kareshta, the silent ones.

But the silent are waking.

Kyra has lived her life in the shadow of a powerful Grigori brother. She's ignored her own desires for the good of her family, but an unexpected request from Thailand sends her on a mission that could change her life and alter the fate of free Grigori all over the world. Sons of the Fallen hidden in the mountains of Thailand have adapted an ancient human magic for their own purposes. Will this practice bring peace or lead to even greater danger for the Irin race?

A simple diplomatic mission sends Leo to Bangkok, but he didn't expect to see a familiar face in surveillance photographs. He's tried everything to drive Kyra from his mind, since he was convinced the gentle kareshta wanted to hide from the world. How did she turn up halfway across the globe, living with Grigori who may or may not be Irin allies?

Leo has bided his time. He's given Kyra her space.

But this scribe is ready to hear a kareshta sing.

THE SILENT is a romantic fantasy, and the fifth book in the Irin Chronicles series.
The Silent is book 5 in the Irin Chronicles and focuses on Leo and Kyra. Leo has known that Kyra is “the one” for years now but has never openly pursued her. Kyra has always been drawn to Leo, but now that her fallen angel father has died her life span is short.

Kyra travels to Thailand to train the kareshta that can’t shield themselves from all the voices. In trade for her services, the free Grigori of the compound will allow her brothers to come to Thailand to receive the Sak Yant to help them reign in their darker sides and gain power. What she doesn’t expect is Leo showing up there unannounced.

Hunter always weaves such a magnificent story and the Irin Chronicles are some her best writing. Her characters are well developed, filled with passion and relatable as well.

About the Author:
Website-FB-twitter
Elizabeth Hunter is a contemporary fantasy, paranormal romance, and contemporary romance writer. She is a graduate of the University of Houston Honors College and a former English teacher. She once substitute taught a kindergarten class, but decided that middle school was far less frightening. Thankfully, people now pay her to write books and eighth-graders everywhere rejoice.

She currently lives in Central California with her son, two dogs, many plants, and a sadly dwindling fish tank. She is the author of the Elemental Mysteries and Elemental World series, the Cambio Springs series, the Irin Chronicles, and other works of fiction.