White witch Ceva has some words for her author Lilli Carlisle...
Our interviewee today is Ceva the white witch who likes to drop in unannounced, kick ass and mouth off. Also with us is the author of Omega’s Choice, Lilli Carlisle. She and Ceva don’t always see eye to eye.
Lilli: Thank you for inviting us to talk with your I Smell Sheep readers. I’d like to introduce Ceva a white witch and our heroine Helena’s godmother. Among Ceva’s many skills, she has a penchant for battling things bigger than her and still managing to survive.
Ceva: At this juncture I have to say I’m not at all pleased I was only a secondary character in Omega’s Choice. I deserved a larger role.

Lilli: Umm, I beg to differ. You had quite a large role. Pivotal in fact.
Ceva: As well I should. I’m a large personality.

Lilli: Ahhh, we’re engaging in understatements now, are we?
Ceva: (Ceva harrumphs.) I deserve to have my own book. You know it as well as I do, but you have to stop waking us up at two o’clock in the morning to work. I’m praying that nonsense has run its course.

Lilli: But between two and four a.m. is when I have my greatest ideas.
Ceva: Uh, yeah, when (coughs behind her hand) normal people are sleeping.

Lilli: (Smiles.) Duly noted. So, since we’re chatting in the cold light of day, why don’t you tell me who should be the male lead character in your book, which, as you know, is next?
Ceva: Well, he’s going to have to be strong, loyal and lethal.

Lilli: Well that’s pretty specific. Let me see…could it be you’re aching for Lothar?
Ceva: (smiles wickedly) Come on give me a chance, here, Lilli. Don’t make a girl beg.

Lilli: Okay Ceva, I’ll give you a chance. Or, maybe Lothar will.
Ceva: Stop toying with me. I’m a witch. Remember?

Lilli: As if you’d let me forget. To everyone out there, Ceva’s Chance will be released soon.
Ceva: GREAT. 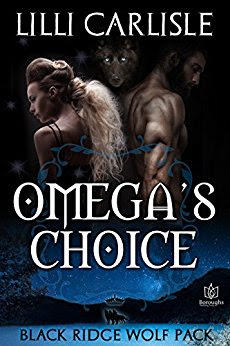 Omega's Choice (The Black Ridge Wolf Pack Book One)
by Lilli Carlisle
May 25, 2017
Genre: PNR, Fantasy Romance
Publisher: Boroughs Publishing
183 pages
ASIN: B072BYT7GK
Scarred but powerful, Black Ridge Wolf Pack leader Aldric Forst has been selected to mate with an Omega—but first he must protect her from the dark forces that would corrupt her magic.

In a realm of elves, ogres and white witches, where danger is ever-present, Princess Helena Lichtenberg lost her parents at a young age. Raised by her uncle and aunt, Helena values family above all else. Now, as decreed by tradition, it is time to select a mate.

Enormous, scarred and scary, Black Ridge Wolf Pack leader Aldric Forst has never drawn the eye of any Omega. Why would he? But, on this, the night of what he swears is his last selection celebration, everything is different. One of those most beautiful, magical and powerful women, the niece of the king and queen themselves, wants him. And Aldric has never wanted anything more in return. No force—no matter how dark, no matter how powerful—will take Helena from him.

EXCERPT:
Princess Helena took that moment to turn toward him again. Instantly, his heart raced, his palms became sweaty, and a nervous excitement rolled around in his stomach, which he wasn’t entirely sure he liked. After all, he was a feared warrior, people looked to him for guidance and strength, and now he felt like he was going to pass out because a gorgeous woman was smiling at him with such joy.

As Amalia spoke to Helena, the princess’s small omega stone on her forehead glowed, and it was impossible to miss the waves of happiness coming from her.

“Looks like the princess is happy you agreed to dance with her, brother.” Godric looked about ready to burst with excitement. “Should I call home and have the rest of our party get on the road?”

“No, not yet, Godric. Let’s see how the evening goes first. Then we can call in reinforcements.” Aldric didn’t want to get ahead of himself. He refused to be let down again. “What do you think Lady Amalia meant by she’d waited years?”

“I have no idea, but I do know the only way you’re going to find out is by asking the princess herself. Ready to waltz, brother?”

“At least all mother’s lessons are about to come in handy. What if she expects our normal life to be like this?” Aldric panicked.

“Okay, now you’re just looking for problems that aren’t even here yet. Get out there and sweep that princess off her feet with the alpha you are. Wait until I tell Cassandra she was right yet again.” Godric had a look of absolute glee at the prospect of making that call back to the pack.

“Yeah, well, if Cassandra was right about this, brother, then she also predicted that I would have to fight for my omega.”

Godric turned to face Aldric and all humor fled from his expression. “If we have to fight for your omega, then it’ll damn well be one we win, I can assure you of that. If this night goes well, I’ll be calling in more warriors as well. They will be here before the sun rises.” Both Theron and Tofa nodded in agreement, even if Theron continued to tap away on his tablet.

“We shall see, Godric. Let’s hope I don’t step on her foot. Then it may be the royal guard we need to fight.” Aldric laughed as he, Godric, Theron, and Tofa stood and made their way across the ballroom to stand in front of King Leonidas, Queen Alexandra, and Princess Helena.

Princess Helena was simply stunning; her emerald green eyes beamed with happiness as he approached. Aldric had never felt this level of immediate attraction before in his lifetime. Helena’s curly blonde hair was pulled away from her face, showcasing her royal tattoo and tiny vines twisting down her slender neck to her collarbone. Her smile lit up everyone and everything around her and her green eyes shone with happiness.

Aldric, Godric, Theron, and Tofa stood before the king and queen, bowing respectfully and waiting for King Leonidas to speak. The entire time, Aldric hoped like hell he didn’t screw this up.

The room had grown strangely quiet. 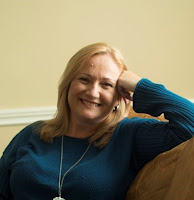 About the Author:
Facebook-Twitter
Lilli Carlisle lives outside Toronto, Canada. She’s a member of the Romance Writers of America and its chapter, Toronto Romance Writers. Lilli is a mother of two wonderful girls, wife to an amazing man and servant to the pets in her life. She writes both contemporary and paranormal romance and believes love should be celebrated and shared. After all, everybody needs a little romance, excitement, intrigue and passion in their lives. Lilli loves to hear from readers.
Sharon Stogner at 12:00 AM
Share