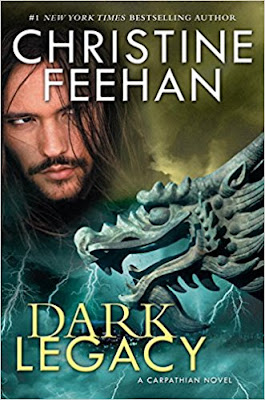 Dark Legacy (Dark Carpathians #31)
by Christine Feehan
Hardcover, 304 pages
September 5th, 2010
Berkely Publishing
In a thrilling Carpathian novel from #1 New York Times bestselling author Christine Feehan, a woman fights to free herself from the grip of the vampire trying to possess her...

In a beautiful compound hidden away from the world, Emeline Sanchez tries to blunt the pain that has wracked her body ever since her terrifying ordeal in the labyrinth beneath the city—when she was forced to exchange blood with an evil master vampire.

Now, it’s his voice that haunts her...that calls to her in the dark...that never lets her rest. And while the children that she helped to free from his clutches struggle to heal, watched over by their Carpathian protectors, Emeline knows one thing: She must sacrifice herself to keep them all from harm.

Emeline was bitten by one of the evil vampires while trying to save a few innocent children. She was forced to exchange blood with the evil vampire and now she's in a lot of pain. While the Carpathians and children she saved are trying to help her, she thinks she has to leave to keep everyone safe from the evil vampire who's in her head, talking to her. That is until she meets one Carpathian male sets her heart on fire for him. As she tries to heal from her harrowing ordeal, there's only one person she really wants to be around and it surprises them both. Emeline has been having dreams about him and she thinks if she can just stay away from him, her dreams won't come true.

Dragomir is an ancient Carpathian male. When the evil vampire finds a way into the compound they are all staying at, he has to rise early to save the humans who are awake and the Carpathians who are still sleeping in the earth. A huge fight ensues and Dragomir finds his lifemate during the battle.

Emeline has been carrying around a huge secret since she had been held captive by Vadim. She thought that the Carpathians would want nothing to do with her and throw her out when they found out but she was wrong. She's an extremely strong woman with very strong gifts that she hid from everyone. But now that all the secrets are out, she's gonna have to trust her friends as well as ancient Carpathians that frighten her in order to get through this next stage of life.

There's a traitor among them but they're surprised when they find out who it is and how Vadim is controlling this person. So while Dragomir and Emeline are getting to know one another, there's also an ongoing fight with Vadim and his underlings.

One of the teenage kids that had been held captive by Vadim also kept a secret of what all the evil vampire had done to her when he had her. But the secret has to come out in order for her to heal and move on. There are a few twists in this story and it was one of the most emotional and heart-wrenching stories in this series The things that Emeline and these kids went through is horrifying and it was hard to read in some parts.

But this book starts off with action right after the beginning of the story and the action, drama, romance, and twists were enough to keep me so engaged in this story that I read it from front to back in 3 hours. I read fast but reading this big book in just 3 hours was fast even for me. I believe this is book 31 in this series which means I've been reading this series for a very long time and I can say without a doubt that this is one of the best books in the series.


Exclusive Excerpt:
“I can’t have you in my house,” she said, betraying her desperation. “Or any of the Carpathians. I . . .” She felt helpless. Selfish. He was nearly dead because of her. He’d done what she’d asked of him. He’d saved the children and the dragons. He had come back to save her, and he had. Now, he was torn, losing far too much blood. Helping her instead of saving himself.

She winced. Now there was authority in his voice. It might be said in a low, velvet-soft tone, but it was pure command. Even Tariq, the owner of the property, didn’t give her orders. They all treated her gently, afraid she’d break. Worse, she wanted to do as he said for all kinds of reasons, but mostly because he was still alive and she needed him to be. The stroke of his tongue on her skin had been . . . shocking. Soothing. It wiped out the horrors of Vadim sinking his teeth into her, making her skin crawl and burn.

She glanced over her shoulder toward the battle. The sound of gunfire was loud and once she thought she heard Genevieve screaming. She stood gingerly, her legs shaky, making up her mind. Determined. He was slippery, his blood coating his skin, and so was she, but she managed to pull him a couple of feet across the porch until they were beside the door. She had to let go of him in order to open the door.

She turned back to catch at his arm. To her dismay, there were more of them. Vampires. Surrounding her house. Threatening both.

Did you think I would give up? I will never stop until you are mine. If you don’t come to me now, we will kill everyone there. Each death will be on you. Vadim’s voice, beautiful and yet foul, moved through her mind like an oily sludge.

She gasped, her hand going protectively to her throat. Could she make herself go with them? Put herself back in Vadim’s hands? A shudder went through her body. She should have known that Vadim wouldn’t give up. He wanted her, and if she didn’t go, Dragomir and every other person in the compound would die.

Dragomir’s fingers settled around her ankle like a vise. “Emeline, step back into the house. Leave the door open, but get inside. If they try to get to you, slam the door shut. They cannot enter without an invitation.”

She knew that. It made sense. She could save herself. Hide in her house. Watch Dragomir die right in front of her. She shook her head and tried to take a step toward the waiting vampires, five of them. Far too many for a Carpathian, even one with Dragomir’s skills, let alone one torn up the way he was.

Dragomir flowed to his feet. She had no idea how. None. He shouldn’t be alive, let alone standing. He literally shoved her into the doorway. “Stay put. You try to leave and I will have no choice but to stop you.”

She glared at him. “They’ll kill you. You can’t fight them.” She took one step toward him, determined to fight with him. If he was going to die for her, then she could do the same for him. Except, she couldn’t move. Her foot ran into some kind of invisible barrier. She reached out with a hand and encountered the same thing. She looked up at him, her eyes meeting his. Determination and resolve were in his. She knew he saw despair in hers.

Dragomir turned to face the five vampires. Emeline pressed against the invisible barrier, her heart pounding and her mouth dry. She couldn’t stand watching, knowing it was going to be a massacre, but she couldn’t tear her gaze away from the big man striding across her porch with confidence.

He was far bigger than she had realized in the confines of the verandah. The blood and scars only served to make him appear invincible, a warrior of old defending his lady. Tears welled up. For him. For her. She wished he was hers. That man, so scarred and torn but standing unbending in the face of evil. 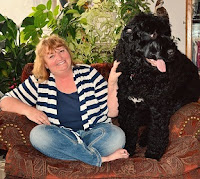