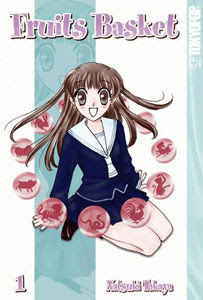 Today we’re going to start with an oldie but goodie. For those who like long-running romance, young adult romance, or just really good plots based on mythology, you’ll likely enjoy this one. It’s also not really all that intense or whackado at any given time, so it’s really easy to fall into.

Fruits Basket is a classic, hands down. The biggest complaint I’ve heard about it is the art, and compared to some it is a little simple, even toward the end of the series. I don’t care because the story is that good. I’ve probably read the whole series three or four times now, and there are always things I forget, always parts that get me right in the feels. 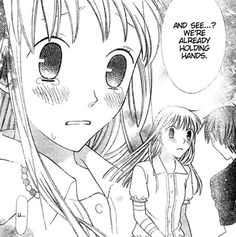 The basic setup is Tohru Honda is a high school student who has recently lost her mom and is trying to fend for herself while her grandfather’s house is remodeled. After being caught camping on the land of a fellow high school student, she’s taken in by the Sohma family. What she soon finds out is that the family is cursed by the vengeful spirits of the Chinese zodiac. Different members of the family transform into their animal when stressed, tired, or hugged by a member of the opposite sex. There’s also a long-term game being played out because these spirits reincarnate from life to life to keep revisiting the final banquet with each other. So the first half of the series is Tohru meeting everyone and the slow reveals of who’s who and dealing with living with two of her male classmates and keeping their secret, while also balancing her own family issues. There’s also something of a triangle between her, Yuki Sohma (the rat) and Kyo Sohma (the cat), who is doubly cursed because he’s not officially part of the zodiac because the cat missed the first banquet (the first volume does a great job of introducing a reader to the lore, so no worries if what I just said sounds like babbling). The back end of the series is a really nice series of plot twists as it’s revealed that Tohru is unknowingly (at first) part of a bigger chess game being played by the head of the family and the other members. 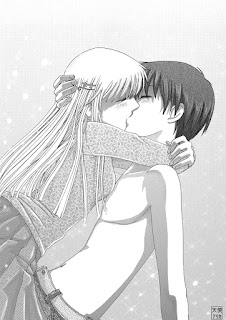 Seriously, the emotions in this are just unreal. I feel like there’s a member of the Sohma family everyone can identify with and it’s fun to see who you link up with in the zodiac. Every family member gets screen time, which is something that can be done really nicely in manga that isn’t easily accomplished in novel or short story form. That’s part of why I love this art form, you can get away with more tangents in series than you can in other forms, and it all just…works. Everyone is a little broken in this series, and seeing the themes of family, the nature of love, and fate vs choice is just lovely. Tohru definitely exhibits the kind of placid, positive manga heroine who just kind of exists, but in this case it actually works for the series. It’s one of the few times I’ll allow a character who’s main trait is “good” to get under my skin, because while everyone else is running around trying to game everything out, she manages to get to the heart of things by being who she is, and ends up finding her place in something bigger. It’s cute, it’s got different layers of story and some nice shadowy moments, as well. It’s a really nice intro series if you’ve never read manga before, because the story is pretty straightforward, it goes on a while without being so long it’s overwhelming, and there are a lot of levels and not just a straight arc. Things do get a little more mature as the characters age, but it’s typical teen stuff you’d find in a lot of YA fiction, so no huge disclaimers here.

My advice would be to go to the library first – there are 23 volumes of the Tokyopop edition (I sadly missed buying them at a library sale for a buck a piece because I wasn’t going to fight a kid over them), and I believe they’re being rereleased by a different company in a slightly different format (you’d have to check amazon to see how far that’s gotten). I will also advise in this case NOT to just watch the anime instead. They change some MAJOR plot points, which in my mind, affect the entire ending for the worse. This is one of those series that explore consequences of choice, and what’s a really intriguing growth in a character in the manga is cut in the anime so they become a standard villain. Definitely go for the manga. 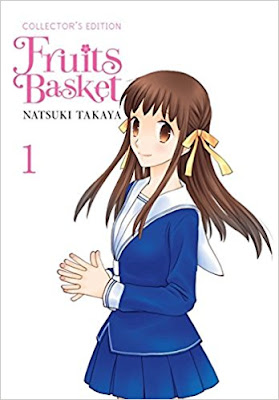 
After a family tragedy turns her life upside down, plucky high schooler Tohru Honda takes matters into her own hands and moves out...into a tent! Unfortunately for her, she pitches her new home on private land belonging to the mysterious Sohma clan, and it isn't long before the owners discover her secret. But, as Tohru quickly finds out when the family offers to take her in, the Sohmas have a secret of their own--when touched by the opposite sex, they turn into the animals of the Chinese Zodiac!

A perennial favorite of fans and librarians alike, Natsuki Takaya's beloved bestselling Fruits Basket series returns to print in gorgeous deluxe English-language omnibus editions with beautiful full-color illustrations that are not to be missed!
Goodreads

Natsuki Takaya (高屋 奈月 Takaya Natsuki, real name Naka Hatake) is the penname of a Japanese manga artist best-known for creating the series Fruits Basket. She was born on July 7, 1973; (Tanabata). Takaya is left-handed and once revealed that she wanted to be a mangaka since first grade, when her sister started drawing.

She was born in Shizuoka, Japan, but was raised in Tokyo, where she made her debut in 1992. She enjoys video games such as the Final Fantasy series or Sakura Wars, or working on her different manga series, such as Fruits Basket, which is the second best-selling shōjo manga ever in Japan, and the top selling shōjo manga in North America. Fruits Basket has also been adapted into a twenty-six-episode anime series.

In 2001, Takaya received a Kodansha Manga Award for shōjo manga for Fruits Basket.

According to Takaya (in a sidebar of a Fruits Basket manga volume), she enjoys drawing girls (girly ones) more than she does boys. Takaya also enjoys electronics and music, but dislikes talking about herself. Also revealed in a sidebar of Fruits Basket, Takaya broke her drawing arm (left) after Fruits Basket volume six was published. She had to go into surgery, and as a result, had put Fruits Basket on a brief hiatus. Takaya made a full recovery, but complains that her handwriting had gotten uglier, due to the surgery. During her hospital stay, she gained an interest in baseball.

About the Author:
website-FB-twitter
Selah Janel is a writer who is trying to start doing that again instead of reading manga all the time.
Sharon Stogner at 12:30 AM
Share