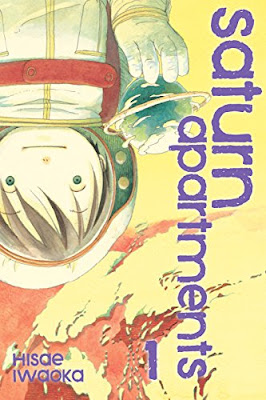 Saturn Apartments, Vol. 1
by Hisae Iwaoka
(7 Book Series)
August 15, 2011
192 pages
Publisher: VIZ Media: VIZ Signature
Far in the future, humankind has evacuated the earth in order to preserve it. Humans now reside in a gigantic structure that forms a ring around the earth, 35 kilometers up in the sky. The society of the ring is highly stratified: the higher the floor, the greater the status. Mitsu, the lowly son of a window washer, has just graduated junior high. When his father disappears and is assumed dead, Mitsu must take on his father's occupation. As he struggles with the transition to working life, Mitsu's job treats him to an outsider's view into the living-room dioramas of the Saturn Apartments.

Oh, you lucky readers, I’m just easing you in so nicely, heh. So obviously you’ve all gotten through Fruits Basket by now (grin), it’s time for another series! It’s fairly short for a series, and it’s a good one to dip your toes into the water if you aren’t all about Ze Luuuurv.

Picture a sci-fi future earth series mixed with Snowpiercer classism, but without the gore and more window cleaners, and you have this series. Humans have ruined the earth so we’ve built a giant ring far above the atmosphere, as one does. Higher class citizens live in the upper levels, lower class in the lower ones. Mitsu is training to become a window washer like his father, who is also one of the few to have had an accident and fallen to the world below.

This series accomplishes a lot in what’s a considerably fewer amount of volumes than a lot of series. You have Mitsu trying to live up to his father and deal with what happened, his interactions with his neighbors and trying to win approval of his coworkers, and his tendency to actually communicate with some of the clients, which isn’t really a thing one does when one’s washing windows miles above the ground. In the later volumes, there’s a plot involving scientists secretly developing the means to go back down to the planet to see what’s really going on, and their bringing Mitsu in on their plot. There’s also a lot of dealings between him and a worker who had quit the union and between him and members of the upper class. It’s extremely easy to grow attached to the characters in this. Not gonna lie, the last volume, the last few pages made me cry, and it’s only one of like two or three series to accomplish that. I like that not everything is happy happy in this world, and they still touch on some heavy issues while remaining appropriate for probably middle school on up. It gives you a lot to think about while still making you feel and laugh at times. And because it has the time to do it, you really feel like you get to know Mitsu, so by time the final plot is really kicking up steam, you’re really invested in not just his future, but the future of his friends, neighbors, and his entire level. It’s also nice to see that it doesn’t fall back on the rich people bad poorer people good trope. There are people on all levels that Mitsu has interacted with that come together to help the overall situation of the station. While Mitsu’s likeableness also overcomes issues surrounding his father’s past and his own relationship with his coworkers, he has to work for it. This isn’t cute kid/nice dude worms his way into hearts and rallies the troops. He actually has to overcome some issues and put in some work, so he does get a decent character arc. 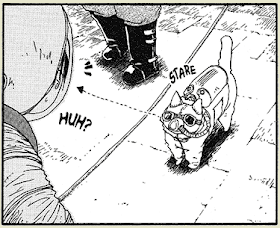 If you like sci fi/post future kind of stuff but don’t want to be punched in the face with darkness, or if you want a sense of hope from your sci fi, definitely check out this series. At seven volumes, it goes by really quickly – you’ll definitely want to go from one to the other back to back to back.

About Selah Janel:
website-FB-twitter
Selah Janel is a writer who is trying to start doing that again instead of reading manga all the time.