Michael Okon guest post: How I Got a Publishing Deal and What’s Next

How I Got a Publishing Deal and What’s Next

It’s a pretty incredible story that I have a hard time believing. I wrote Monsterland and self-published it in 2015. My mom is my publicity manager and she blitzed the bloggers with my book. That fall I was reading a book called Selling a Screenplay by Syd Field. In the book, there was an entertainment attorney named Susan Grode who seemed very knowledgeable about the publishing and film industry. I told myself, when I receive my first contract, I’m going to reach out to her to see if she could help me. About two months later, I received a post on Facebook from an agent in London who asked to represent me. I said sure and asked him to send me a contract. I emailed Susan and introduced myself and mentioned that I had someone who wanted to rep me and I was hoping she could read this contract. She told me before I sign with this London agent, why don’t I meet her friend in Brooklyn, an agent named Nick Mullendore with Vertical Ink Literary Agency. I met Nick for lunch and he signed me that day as his client. That evening, Susan brought me on as her client as well.

Nick began trying to sell my book Monsterland to the big publishers and, as expected, it was rejected. Throughout his attempts of selling, he had a call with a film agent and he was pitching her a romance novel. She said she wasn’t really into romance and was looking for something with monsters. He sent her my book Monsterland, she read it over a weekend, and we had a call that Monday. She told Nick and me if we get the book published, she will get it into a producer’s hands to make into a film. Nick found a publisher called WordFire Press owned by Kevin J. Anderson, who has written all the Star Wars and Dune canon books. WordFire signed me to a two-book deal for Monsterland 1 & 2. After the deal was signed, my film agent did what she promised and got my book into the hands of a billion-dollar grossing producer who is now shopping my book to certain studios.

In two years, I went from a self-published author, to a published author with a literary agent, an entertainment attorney, a film agent, a two-book publishing deal, a publicist, and a producer who is interested in turning my book to a film. It’s been one wild ride, to say the least.

Now, what’s next? Well, one may just sit back and relax, and do nothing. Not I. I’ve already completed Monsterland 2 which comes out May 26, 2018. I’m knee-deep in Monsterland 3. I’ve already started beating out the stories for Monsterland 4 and 5. It seems that the next five years are going to be extremely busy with creating stories centered on monsters. What could be wrong with that? 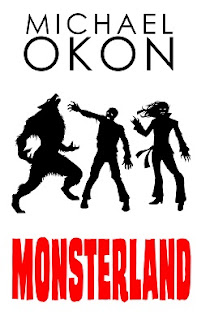 The last couple years of high school have not been fun for Wyatt Baldwin. His parent's divorce, then his dad mysteriously dies. He’s not exactly comfortable with his new stepfather, Carter White, either. An on-going debate with his best friends Howard Drucker and Melvin over which monster is superior has gotten stale. He’d much rather spend his days with beautiful and popular Jade. However, she’s dating the brash high-school quarterback Nolan, and Wyatt thinks he doesn’t stand a chance.

But everything changes when Wyatt and his friends are invited to attend the grand opening of Monsterland, a groundbreaking theme park where guests can rock out with vampires at Vampire Village, be chased by actual werewolves on the Werewolf River Run, and walk among the dead in Zombieville.

With real werewolves, vampires and zombies as the main attractions, what could possibly go wrong?

About the Author:
website-FB-twitter
Michael Okon is an award-winning and best-selling author of multiple genres including paranormal, thriller, horror, action/adventure and self-help. He graduated from Long Island University with a degree in English, and then later received his MBA in business and finance. Coming from a family of writers, he has storytelling is his DNA. Michael has been writing from as far back as he can remember, his inspiration being his love for films and their impact on his life. From the time he saw The Goonies, he was hooked on the idea of entertaining people through unforgettable characters.

Michael is a lifelong movie buff, a music playlist aficionado, and a sucker for self-help books. He lives on the North Shore of Long Island with his wife and children.
Sharon Stogner at 12:30 AM
Share