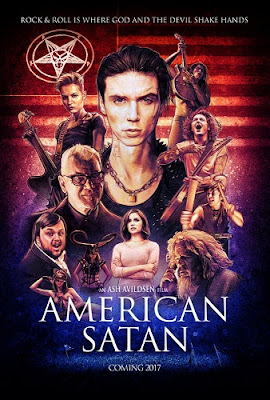 American Satan (2017)
October 13, 2017 (USA)
Director: Ash Avildsen
Writers: Ash Avildsen, Matty Beckerman
Cast: Denise Richards, Booboo Stewart, Malcolm McDowell, Mark Boone Junior, John Bradley, Drake Bell, Sebastian Bach, Andy Biersack
Rating: R
2hrs 55mins
Genre: Drama, Music, Thriller
Official Sites: film website
A young rock band, half from England and half from the US, drop out of college and move to the Sunset Strip to chase their dreams. Living in a van, their passion and talent exceed their means to survive. An enigmatic stranger sees their true potential and emotionally manipulates them during a time of weakness. Caught in the middle of a Faustian deal, their music and controversial altercations end up influencing society beyond anything this century has seen, but can they take back control of their destiny before it's too late? Written by ir

I have been waiting for this movie to come out since it was announced. Clearly, I am a bit bias by the fact that I’m a huge Black Veil Brides fan, but I really was interested in the plot. I went and saw the film last night (in cosplay), with my mom (Sharon Stogner), and I have to say I enjoyed every second of it. It’s got its faults, and it’s clearly an indie film but it’s one of the best indie films I’ve seen.

I’ve decided to make a list of the pros and cons of the movie, so here we go.

Pros
*The storyline is incredible. There was so much thought put into even the smallest of details. It’s one of those films where each time you watch it you pick up another little detail. The concept of rock bands/musicians making deals with Satan is a very popular one and it’s honestly shocking this movie hadn’t been made before.

*American Satan is based on the story of Johann Georg Faust. The protagonist named, Johnny Faust,  makes a deal with the devil in exchange for success. There are actually plot twists that I didn’t see coming. 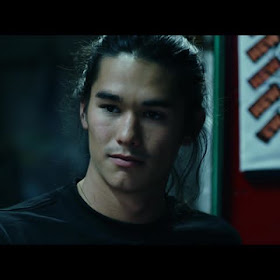 *There are some really funny parts to the film, but also some VERY dark parts.

*My expectations for Andy’s (Johnny Faust) acting weren’t too high and there were some parts where it was kind of poor but overall he channeled the character and the character’s emotions well.

*The ending left open the possibility that the story isn’t over.

*Remington of the band Palaye Royale was a PERFECT choice for vocals. The soundtrack and songs made for the movie were amazing. Seriously, the song ‘Let Him Burn’ gets a whole new meaning.

*Since there are actual musicians in the film, it really does paint an accurate picture of what the life of a rock star is really like. The film doesn’t shy away from the pretty horrific side of it.

*Mr. Capricorn (Malcolm McDowell) plays an amazing devil, holy sheep he was a perfect choice.
*The casting was well done.

Cons
*There is WAY to much story packed into two hours. The film follows the band's two years rise to fame but there was no frame of time reference. There would be a scene where the band is doing drugs. Then the next scene they were doing a show. It seemed like it all happened within days of each other, but there might have been months between the two events. It didn’t seem like two years had passed from the rise and fall of the band. 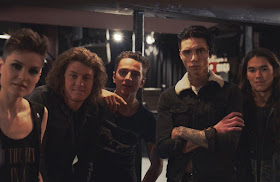 *It felt like things were left out. For instance,  the band knows immediately after meeting Mr. Capricorn that he is the devil. To me, it would take a bit more than just one talk with someone to go from not believing in the devil or God, to thinking that you’re sitting with the devil.

*Johnny’s mom (Denise Richards) wasn't a believable character. It is hard to believe a mother would be so cool with her son doing the things Johnny Faust was doing.

All in all, though the film was well done. The acting was, for the most part, good and the movie LOOKED good. I would recommend it if you’re into the emo/rock/metal scene or like Asking Alexandria/Black Veil Brides. It’s not so much horror/thriller, but darker. I would also recommend it if you like films with deeply religious themes or important lessons. The film makes you think, which I like. My mom went to see it with me (she also liked it) and we’ve both spent the whole day just going over parts of the plot. I liked that the ending isn’t exactly ‘happy ever after’. And what really won me over was just the plot and writing. I plan on seeing it again and I’m for sure going to buy it when it comes out on DVD. There is a possibility it could become a cult classic.

I’m giving the film two ratings. One from the perspective of an indie film and one for overall.