Story Behind the Story: Psi-Techs (A Psi-Tech Novel - Book 3 by Jacey Bedford) + giveaway

Psi-Techs in General and Nimbus in Particular

Nimbus, the final book in my Psi-Tech trilogy, is just out from DAW.

Sometimes big ideas start with a bang and arrive fully formed, sometimes they start small and grow. The Psi-Tech trilogy has not one big idea but two, though neither works without the other.

Way, way back in the mists of cliché, when dinosaurs walked the earth, we all cleaned our teeth with sticks, and Amstrad was cutting edge technology for a scribbler like me, a scene presented itself and begged to be written.

A telepath sits in a small, grey room on a backwater space station, acting as a human phone operator, making instant calls across the galaxy for anyone who can pay the going rate. It's a dead-end job, not what she's trained for, not what she's capable of doing, not what she's used to. So why is she here?

She's here because she's afraid. She's on the run from… someone. (I didn't know who or why, right then, but I knew it was serious.) If they catch up with her they'll kill her and she'll be very lucky if it's quick and painless.

She needs to escape, but her luck and her credit have run out.

She's contemplating cruising the transients' bars to see if she can hitch a free ride. She'll take anything, even the worst bucket-of-bolts mining barge, even if she's got to sleep her way on board.

Then a last-minute job comes in. She doesn't want to take it so she jacks the price right up, but the caller agrees anyway. It piques her interest. Telepaths always hear, but they mostly choose not to listen. This time she does. There's talk of a new colony. The settlers are back-to-basics Ecolibrians who've opted for a closed planet. If she can talk her way on to that mission she can steer clear of her pursuers, find safety.

That was how it all started. It grew slowly and changed over time, of course. In time-honoured tradition of authors everywhere, the first scene didn't survive, though the frightened Telepath and the Ecolibrian colony did.

The gestation period of a book varies from months to years and this one was years. I wasn't under contract to a publisher back then, so there was no pressure. When I sold my first book to DAW (Winterwood, a historical fantasy) and signed up with the Donald Maass Literary Agency, my editor said those words that every writer hopes for: 'What else have you got?'

DAW’s publishing schedule had an empty slot for science fiction before one for fantasy, so Empire of Dust became my debut novel. Under Sheila Gilbert's gentle but thorough guiding hand. I knew that DAW wanted a sequel, so I was building the world for at least a two book series and possibly three.

What has become my Psi-Tech Universe now contains a galaxy-spanning human society which uses jump gates and telepaths to navigate foldspace.

Neither jump gates nor telepaths are unusual tropes in science fiction. So what makes them different in the Psi-Tech universe? Mega-corporations more powerful than any single planetary government. race each other to colonise worlds and gobble up resources, using as their agents psi-techs, humans with psionic implants. Each one of them is economically tied to the megacorp that paid for their implant. They are treated well as long as they don't step out of line. If they do rebel, their attitude can be readjusted, but they may not come out of it exactly… sane.

Add to this the platinum problem. Platinum is a valuable catalyst and though it exists in lots of places, it's usually only found in tiny quantities and it takes a long time to process tiny quantities from a huge amount of ore. Fun fact: in the whole history of our world to the present date, the amount of platinum mined amounts to less than 25 cubic feet. In my psi-tech universe, with every jump through foldspace a small but significant amount of platinum is lost, so the need to find more and bigger platinum deposits drives everything. And the megacorp which controls the most platinum is in the strongest position.

And now back to that frightened telepath, Cara, fleeing from her former boss because she knows too much. When she hooks up with Navigator Reska (Ben) Benjamin, she plummets them both into danger. Friends become enemies. Betrayal follows betrayal. Knowing whom to trust becomes the ultimate survival skill. If they make the wrong move an entire colony planet will pay the ultimate price.

Cara and Ben's story is just the beginning, though. Solving one problem highlights another. Ideas demand room to grow and Empire of Dust is only the first outing for my troubled psi-techs.

In the second novel, Crossways, the survivors, now wanted by the megacorps on trumped-up charges, take refuge on a huge space station run by a coalition of crimelords. Crossways fought for its freedom from the big corporations, so its denizens don't ever intend to let it be taken over again. It's a kind of future version of Tortuga-in-space where pirates, smugglers and free-traders can take refuge alongside displaced persons, refugees, radicals, free-thinkers, and opportunists. The megacorporations have been looking for an excuse to take down Crossways and the psi-tech presence there might just be the excuse they need.

But something is stirring in the unfathomable depths of foldspace. Pilots and navigators are told that foldspace visions are an illusion, but that’s a lie perpetuated by their teachers ‘for their own good.’ Yeah, right! In the third book, Nimbus, what’s really happening in the Folds will change the future of humans in space, but not unless the conflict with the megacorporations can be resolved and humankind tackles the problem together. 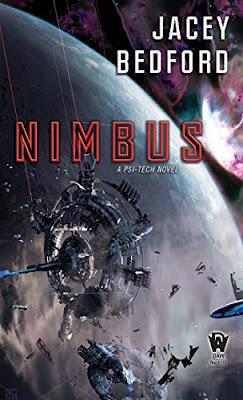 3rd October 2017,
DAW  Mass Market Paperback
544 pages
Nimbus is the third Psi-Tech book, bringing the story of Cara and Ben to a close for now.

In a galaxy where the super-powers are the megacorporations, and ambitious executives play fast and loose with ethics in order to secure resources, where can good people turn for help? The megacorps control the jump gates and trade routes. They use psi-techs, implant-enhanced operatives with psionic abilities, who are bound by unbreakable contracts. Cara Carlinni once had her mind turned inside out by Alphacorp, but she escaped, and now it’s payback time.

Ben Benjamin leads the Free Company, based on the rogue space-station, Crossways. The megacorps have struck at Crossways once—and failed—so what are they planning now? Crossways can’t stand alone, and neither can the independent colonies, though maybe together they all stand a chance.

But something alien is stirring in the depths of foldspace. Something bigger than the squabbles between megacorporations and independents. Foldspace visions are supposed to be a figment of the imagination. At least, that’s what they teach in flight school. Ben Benjamin knows it’s not true. Meeting a void dragon was bad enough, but now there’s the Nimbus to contend with. Are the two connected? Why do some ships transit the Folds safely and others disappear without a trace?

Until now, humans have had a free hand in the Galaxy, settling colony after colony, but that might have to change because the Nimbus is coming.
Amazon.co.uk | Amazon.com
Go to Empire of Dust and Crossways 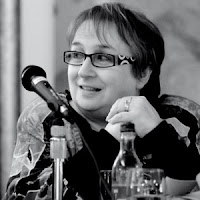 About the Author:
website-FB-twitter
newsletter
Jacey Bedford has a string of short story publication credits on both sides of the Atlantic. She lives a thousand feet up on the edge of the Yorkshire Pennines in a 200-year-old stone house. She has been a librarian, postmistress, rag-doll maker, and a folk singer in an a cappella trio.

GIVEAWAY
A copy of EMPIRE OF DUST, the first in the psi-tech series.