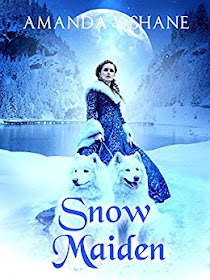 by Amanda V. Shane
December 1, 2017
228 pages
A commoner and the outcast of her village...Nika is forced to flee her home to keep the dark secret of her birth. When she is hunted by a rugged Northman, she finds herself lost in a land of spells and curses. His kisses start to melt her cold, lonely heart, her secrets are laid bare and she finds herself in a magic war for the man and the kingdom she loves.

King of a cursed and ravaged kingdom...when Vasilli first lays eyes on Nika stealing bread at a fair, he knows he has to have the fair haired beauty. The legends surrounding his lands tell of a snow maiden who will break the curse of the Northern Kingdom but he wants Nika for his own.

From a land of winter, ice and snow comes a tale of enchantment and romance. Mages and sorceresses, omens and curses - this spellbinding grownup fairytale is a story of magic in an ancient land and a legendary love that will heat up even the coldest winter night.

Inspired by the Russian fairytale The Snow Maiden.

This story involves some intimate scenes and adult situations. If such material offends you, please don’t buy this book.
Snow Maiden is a standalone book written with fairytale flair. Nika, a young commoner of mysterious birth, has been an outcast her whole life. Her fair hair and blue eyes mark her as other; features associated with a malevolent entity from the neighbouring forest. When her grandmother dies, Nika is forced to flee her village or face certain death at the hands of the villagers who believe her to be a harbinger of their demise. And so Nika sets off, penniless and without a plan. But the intervention of benevolent supernatural beings, as well as the protection of a rugged Northern king, provide Nika with a chance at survival, self-discovery, and happiness.

Snow Maiden is a charming story and Shane’s first book. The setting is abundantly creative; the woodland lore beautifully established and described. The premise of the tale -- King Vasilli must find a way to break the curse threatening the survival of his fledgling Northen kingdom -- isn’t enormously original and the characters are largely based on types. However, Shane takes a simple foundation and builds a wholly enchanting tale. The romance between Nika and Vasilli develops at a delicious pace, greatly enhancing reader engagement. I was thoroughly entertained and devoured the book in one day. Kindle Unlimited subscribers can currently read Snow Maiden for free.

About the Author:
website-FB-twitter
Pin
Amanda V. Shane is a Colorado native and fully admits to being a library dork growing up. To this day, she loves the smell of book paper on an almost fetish level (okay, maybe not, but that gives you a peek into the dark and twisted mind of this author). One of her first book romances came at the age of nine when, in a far back aisle, she found the story of King Arthur and was entranced by the blood purple canvas cover with gold leafing (she likes shiny things.)
Since then, she’s been hooked on stories with magic, mythical beings, daring heroes and, of course, desperate romance.
She writes paranormal and fantasy romance from her home where she lives with her family and a Bassett hound who she routinely has to fight for the “soft” end of the couch to set up with her laptop. She likes chocolate, wine, coffee and kids, in no particular order.
Sharon Stogner at 6:40 AM
Share