I’m Claire McCormick, the main character in “The Dark Proposal” by Megan Cashman. I am so excited to be here on I Smell Sheep! I have lots to say about my story being told, and the author herself!

Firstly, I know my story is not your typical love story but I do hope you all learn from it. I went through a lot, and I hope none of you go through what I went through. Dealing with vampires is pure hell. And these are not the sparkly, cuddly kind! These are evil vampires! And they are real too! I couldn’t believe they were real at all, and I was in such denial and afraid to admit to myself that vampires were real. Heck, it also wasn’t easy being told I had a choice to become a vampire myself or my friends and family would suffer! Talk about going insane over that.

Anyway, I hope you enjoy my story. A lot of women go through toxic and even abusive relationships, so my story is not that unique. Too many women suffer like me, so maybe if my story prevents one young woman from being in such a relationship with a horrible, evil guy – let alone a vampire! – then all the better.

That being said, I got a few things to say about the author of my story, Megan Cashman. Yes, she’s hardworking and really dedicated to writing. But what is with her need to drink coffee while she writes? Is that some kind of magical fuel for her? And why does she have to go to coffee shops in order to write? Can’t she write at home, where it’s more quiet? Seriously, I don’t get it. When I do my writing (yes, I’m a freelance writer myself), I can do it at home. Even with my crazy yet dear roommates, Samantha and Monica, at home making noise, I can write my work at home. And I don’t need coffee! I can write with just water, or nothing at all. I dunno, rituals don’t make sense to me, I guess. Writing is amazing, but it is not some kind of sacred ritual. Eh, whatever.

So, that is my take on “The Dark Proposal” and the author, Megan Cashman. 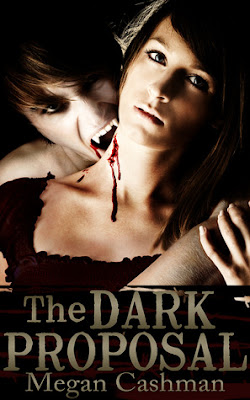 The Dark Proposal (The End of Eternity Book One)
by Megan Cashman
September 14, 2012
Genre: Urban Fantasy
ASIN: B00D6WJFUU
Number of pages: 211
Word Count: 79,050
Cover Artist: Karri Kwaliter
A young woman copes with being forced to become a vampire as the man she loves reveals he is more evil than she can comprehend.

Claire McCormick has graduated from college and is eager for her childhood dreams to come true. She thought it would happen when she began dating Daniel Bertrand, who was everything she wanted in a boyfriend. But just as her dreams are about to happen, Claire’s life is turned upside down when Daniel reveals to be a bloodthirsty vampire, with the intent on making her his eternal companion. Frightened, Claire desperately tries to rid herself of him, but Daniel is too evil to defeat. She has to come to terms with reality, as she faces a vampire world fighting to survive in modern times, with many of them unaware of how devious Daniel can be.

The Dark Proposal is the first book in a trilogy that follows what becomes of Claire and the vampires.

Excerpt:
There was a pregnant pause with both waiting for the other to speak or make the first move. For a second, she wondered if this was going to be the moment he would make her like him or kill her instead.

“No, Claire,” he spoke suddenly. She jumped, startled. “It’s up to you to say yes. And remember I did tell you I can read your thoughts.”

“Then please stop, because you’re freaking me out,” she said.

He arched one eyebrow, and for a moment, she feared he would attack her. But instead, he crossed one arm across his chest and put the opposite hand under his chin, as though contemplating something.

“I see you’ve accepted somewhat of what I revealed to you,” he finally said.

“A little.” She felt like she was preparing for war.

“What?” He sounded curious. “Is there something else you can’t comprehend?”

“Yeah,” she said in a shaky voice. Her eyes were downcast, and when she was ready, she lifted them to look right at him. “I did some research while in New Jersey. There’s a lot of websites about real vampires.”

Taking a deep breath, she said, “I think you killed Colin Willis.”

His face expressionless, he lowered his arms and closed his eyes, shaking his head. He ran one hand over his face as Claire continued.

“I read a blog about his murder. There are rumors going around that he had two holes on the side of his neck. There was no blood in his body.” She swallowed and asked, almost pleading, “Did you really do it? Honestly, Dan?”

Removing his hand, he looked right at her and said, “I think you know the answer to that question.”

She did, and whatever hope she had that he did not murder Willis quickly dissolved. She began to pant in horror at first, but then in anger. “I mean, you knew as everyone else that there was no evidence of foul play,” he was saying, nonchalantly watching her. “Plus, there were no suspects -”

Claire suddenly pounced on Daniel, arms flailing as she hit him in the face and chest. She was screaming about him being a murderer and how evil he was.

It didn’t last long because he soon caught her flying fists and held a tight grip on her wrists, holding them away from him. His grip was beyond solid, like a steel machine, and his eyes were hollow with rage. For a moment, she thought he was going to attack her again. No, he was going to kill her. She dared to hit him, dared to defy him and now she would pay the price.

He held her in his harsh eyes for a moment, and then shoved her hands away, practically pushing her away from him. “Honestly, who else would’ve done it?” 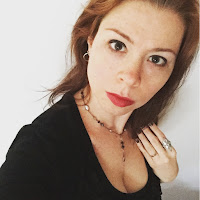 About the Author:
website-FB-twitter
goodreads-Pin
Born and raised on Staten Island, NY, Megan Cashman currently lives in Brooklyn, where she can be seen checking out the borough’s numerous coffee shops to work on her writing projects. She has a Masters’ degree in journalism, and has worked for cable news, both local and national, as well as a major New York newspaper. She is currently a freelance journalist and an adjunct professor at the City University of New York (CUNY). When she’s not writing or teaching, Megan can be seen taking nature photos with her iPhone, crocheting, doing yoga and Pilates, and trying out new dinner recipes.
Sharon Stogner at 8:34 AM
Share