Book Review: Into the Black Nowhere (UNSUB #2) by Meg Gardiner 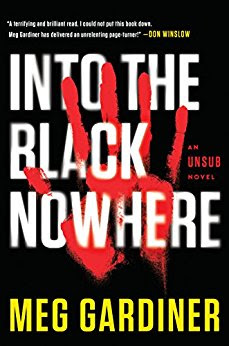 Into the Black Nowhere (UNSUB #2)

In southern Texas, on Saturday nights, women are disappearing. One vanishes from a movie theater. Another is ripped from her car at a stoplight. Another vanishes from her home while checking on her baby. Rookie FBI agent Caitlin Hendrix, newly assigned to the FBI's elite Behavioral Analysis Unit, fears that a serial killer is roaming the dark roads outside Austin.

Caitlin and the FBI's serial crime unit discover the first victim's body in the woods. She's laid out in a bloodstained, white baby-doll nightgown. A second victim in a white nightie lies deeper in the forest's darkness. Both bodies are surrounded by Polaroid photos, stuck in the earth like headstones. Each photo pictures a woman in a white negligee, wrists slashed, suicide-style--posed like Snow White awaiting her prince's kiss.

To track the UNSUB, Caitlin must get inside his mind. How is he selecting these women? Working with a legendary FBI profiler, Caitlin searches for a homology--that elusive point where character and action come together. She profiles a confident, meticulous killer who convinces his victims to lower their guard until he can overpower and take them in plain sight. He then reduces them to objects in a twisted fantasy--dolls for him to possess, control, and ultimately destroy. Caitlin's profile leads the FBI to focus on one man: a charismatic, successful professional who easily gains people's trust. But with only circumstantial evidence linking him to the murders, the police allow him to escape. As Saturday night approaches, Caitlin and the FBI enter a desperate game of cat and mouse, racing to capture the cunning predator before he claims more victims.

Into the Black Nowhere is a superb thriller with Criminal Minds flair. Book two in Gardiner’s UNSUB series, Caitlin Hendrix and her FBI profiling team are on the trail of the “Saturday Night Killer,” a serial killer preying on young women; capturing, killing, and staging his victims with maniacal attention to detail. I did not read UNSUB #1 but had no problem jumping in at book two. I credit Gardiner’s clean, precise, and engaging writing style.

I diverged from my usual PNR and UF preferences on this straight up crime thriller, however, it was a refreshing detour. The storyline was superb and the characters captivating. Caitlin is as smart as she is tough, but she’s human; almost tragically so. Her baggage and common human insecurities make her real for the reader. Her dogged determination to snag her prey prompted me to read with a parallel tenacity. The psychopathic killer is well-developed and merciless. The story is raw and tragic, but ultimately triumphant. The epilogue sets the stage for UNSUB #3 and, honestly, I can’t wait.

Into the Black Nowhere is a definite must-read for crime thriller fans.

About the Author:
website-FB-twitter
Meg Gardiner is the author of fourteen thrillers. Her latest novel, Into the Black Nowhere, features rookie FBI agent Caitlin Hendrix. Don Winslow calls it "A terrifying and brilliant read." It's the sequel to UNSUB, which is nominated for a Barry Award for Best Thriller and is in development as a TV series by CBS.

Meg was born in Oklahoma and raised in Santa Barbara, California. A graduate of Stanford Law School, she practiced law in Los Angeles and taught writing at the University of California Santa Barbara. She's also a three-time Jeopardy! champion. She lives in Austin, Texas.

Meg is the author of the Evan Delaney series and the Jo Beckett novels. China Lake won the 2009 Edgar award from the Mystery Writers of America for Best Paperback Original.

The Nightmare Thief won the 2012 Audie Award for Thriller/Suspense audiobook of the year. Phantom Instinct was one of O, the Oprah magazine's "Best Books of Summer."
Sharon Stogner at 12:00 PM
Share