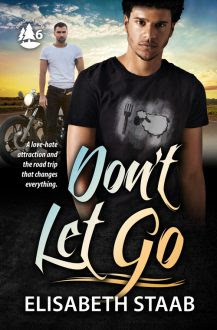 
Left behind by everyone he’s ever loved, Alonzo Grover lives as if he’s got no future. The discovery of a letter from his deceased boyfriend breaks him out of his rut and spurs him to right an old wrong, but the local stick-in-the-mud sheriff’s lieutenant seems determined to ruin his plans.

Lieutenant Sebastian Haas despises tangling with his small town’s most promiscuous party kid. Alonzo’s youth and recklessness drive him crazy in more ways than one… So does the uncomfortable secret they share. But when Haas’s estranged family arrives in town to throw a wedding he wants no part of, he jumps into Alonzo’s car to avoid the family drama.

Together, they wind up on an unexpected road trip. With one setback after another, it looks like they might kill each other before they make it home to Evergreen Grove. That is, unless they find something better to do than fight.

Let's first talk about the cover, specifically the t-shirt worn by the guy on the cover. That was a reason to read this contemporary romance and the fact that it was written by Elisabeth Staab. I love the way she layers the emotions of her characters and how those complicated emotions affect the dynamics of the relationships. Staab has two PNR series and two contemporary series. The Evergreen Grove series has M/F and M/M stories. So she has something for pretty much any reader.

The premise of Don't Let Go was pretty troupey. Two polar opposites go on a road trip. You get the three Fs. Frustration, Fighting...Forking. Ha! I just made that up. Both guys have been hurt by a past relationship but they've handled it in very different ways. Again, more predictable troupes. What sets this story apart from the rest of the books out there is the character's emotions. They aren't simplified. Like I said above, Staab writes characters with many emotional layers and then does a good job at revealing them to the reader.

You can't have a hot romance without some good sexy time between the couple. Alonso and Sebastian's encounter in a hotel bathroom reveals a lot to the reader as well as the characters. It rocks their physical and emotional worlds.

While some of the action was predictable I still held my breath near the end worrying whether or not Alonso and Sebastian would work things out. And I was pulling so hard for them!

Don't Let Go is written in first person from two POVs. It is a stand-alone with a happy ever after.

Excerpt:
Alonzo
Haas looks like that stick is wedged even farther up his ass than usual. “So why don’t you tell me what the hell is going on?”

“Maybe I just missed you and I wanted to get your attention.” I grin, spreading out on the bench in the holding cell and giving him a look that’s sure to set his hair on fire.

Truth is, I find this guy as interesting as I do enraging. I’ve always found men in uniform strangely hot. And that giant stick up his ass? I’m betting cash money it’s actually the pole for his extra-large freak flag. Believe me, there is definitely a flag.

I’ve seen the proof, and Lieutenant Haas’s presence in this town has been like sand in my jock ever since.

“Haas, you know I wouldn’t pay for sex. It’s not as if I need to. And by the way, you want to tell me how come I’m in here, and good old Celery was allowed to have an orange soda out in the squad room while he waited for his mom?”

I lean back with my knees spread wide on the bench, keeping my stare stuck on his. Reminding him of what we both know. He’s seen me plenty of times with plenty of people, and this right here is bullshit.

He narrows his eyes. Clearly, Haas doesn’t like being reminded that he’s had ringside seats to my shenanigans. Which is why I keep reminding him.

“You’re in here because your behavior in the squad room was completely inappropriate.”

“Please. I was on my best behavior.”

He leans in, wrapping one large hand around the bar of my holding cell. There’s a chunky ring on his left index finger, like a class ring, I’d guess. Not that I ever bothered getting one of those. That sort of man-jewelry always struck me as another penis extension.

Sebastian Hass is a big guy, though. Taller than my own six feet (okay. Five-eleven and one half. Close enough, thankyouverymuch), and broader in the chest and shoulders. The man’s boots are massive. I suspect Haas doesn’t have anything to make up for.

About the Author:
Website-FB-Twitter
Pinterest-Newsletter

Elisabeth Staab started hunting mutant hedgehogs back in 1842… Oops, wrong bio… Elisabeth Staab digs coffee, saucy stories, and sexy things that go bump in the night. Once, she ate dinner in a jail and liked it. She lives in the Washington DC area with her incredible family and does her best to juggle life while ignoring the laundry.
Sharon Stogner at 12:30 AM
Share