Book Review: How to Break an Undead Heart (The Beginner’s Guide to Necromancy Book 3) by Hailey Edwards 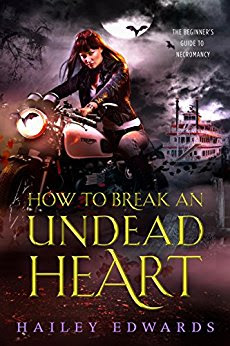 Grier finally has the one thing she's always wanted: Boaz Pritchard. Too bad her dream boyfriend is keeping her up nights, just not in a sweaty or fun way. Boaz has dialed down the Southern charm and stopped returning her calls. His job forces him to keep secrets, but his radio silence is cranking up her suspicions. He's a shameless flirt, but he's her shameless flirt...right?

Soon an attack on Woolworth House leaves her with bigger problems than he loves me, he loves me not. Vampires are on the prowl, and they aren't the only predators circling. A new threat has emerged, one with blood rights to Grier. With enemies closing in on all sides, she must choose her allies, and the decision could make or break her...and her heart.

Warning: This book contains a buttload of zombie parakeet poop. Like grab a poncho and thank me later. Watch out, y'all. It's about to hit the fan. Hearts will break, and heads will literally roll.

Grier and Boaz are finally a thing, but Grier is doubting where she stands when Boaz has stopped calling her. She knows that his job forces him to keep secrets but since he can contact Amelie, Grier is wondering if she’s just another girl on his long list.

Woolworth house is attacked again and the vampires are still trying to capture her for their master. Wherever Grier turns there seems to be a new enemy lurking. She’s at the point that she isn’t sure there are any allies left

Grier is one of those characters that you can empathize with. She’s been cheated, lied, wrongfully accused and hurt more times than she can count, but is able to keep on going. She believes the best in everyone and tries to protect them. Relationships are complicated and more so when you are Goddess touched as Grier is. The spark between Linus and Grier is unmistakable but then there’s Boaz who she has loved since they were kids. It’s hard to decide who to root for in the third installment of The Beginner’s Guide to Necromancy. I look forward to seeing where the next book will lead us. 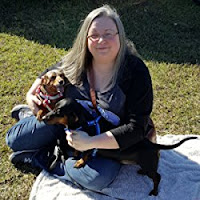 About the Author:
website-FB-twitter
Hailey Edwards writes about questionable applications of otherwise perfectly good magic, the transformative power of love, the family you choose for yourself, and blowing stuff up. Not necessarily all at once. That could get messy. She lives in Alabama with her husband, their daughter, and a herd of dachshunds.