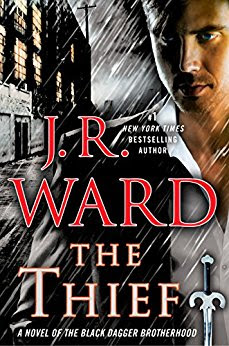 by J.R. Ward
April 10, 2018
Pages: 463
Sola Morte, former cat burglar and safecracker, has given up her old life on the wrong side of the law. On the run from a drug lord’s family, she is lying low far from Caldwell, keeping her nose clean and her beloved grandmother safe. Her heart, though, is back up north, with the only man who has ever gotten through her defenses: Assail, son of Assail, who never meant to fall in love—and certainly not with a human woman. But they have no future, and not just because she doesn’t know he is a vampire, but because he is no
t about to stop dealing arms to the Black Dagger Brotherhood. Fate, however, has other plans for them. When Assail falls into a coma and lingers on the verge of death, his cousins seek out Sola and beg her to give him a reason to live. The last thing she wants is a return to her past, but how can she leave him to die?

As a lethal new enemy of the vampires shows its face, and the Brotherhood needs Assail back on his feet, Sola finds herself not only a target, but a mission-critical force in a war she doesn’t understand. And when Assail’s truth comes out, will she run from the horror . . . or follow her heart into the arms of the male who loves her more than life itself?

Sola and her grandmother relocated to Miami to stay safe from a drug lord and his family. Giving up her life as a thief has proven difficult but keeping her grandmother safe is of the highest priority. Assail has fallen in love with a human woman but knows they can never have a life together. She doesn’t know he’s a vampire or a drug addict for that matter. Assail falls into a coma and seems to be on the edge of death when his cousins decide that Sola is the only one who can bring him back. The cousins persuade Sola and her grandmother to return to Caldwell to visit Assail and hope that Assail's love for her can return him to the land of the living.

The Brotherhood has a new enemy that leads to more questions than answers. The deadliness which they have never seen seems to be connected to a lost or possibly stolen artifact. Assail decides that the only way to truly be honest with Sola is to come clean about everything even though he knows he risks losing her forever. To battle this new-found enemy, the Brotherhood turns to Assail to connect them with a contact from his former life to supply them with much-needed ammunition.

Ward always does a masterful job of weaving her stories. The main story, which is Assail and Sola, is artfully done while setting the path for future books with the new enemy the Brotherhood is facing and a glimpse at a possible new trans that has all kinds of possibilities.

About the Author:
website-FB-twitter
J.R. Ward is the number one New York Times bestselling author of the Black Dagger Brotherhood series of vampire books. She is a winner of the prestigious Romance Writers of America RITA award for Best Paranormal Romance and is a multiple RITA nominee. A graduate of Smith College, she was a double major in History and Art History with a medieval concentration in both and she still longs at times for a return to those days sitting in dark lecture halls, looking at slides of old triptychs and reliquaries. Prior to becoming a full time writer, she was a corporate attorney, serving for many years as the Chief of Staff of one of Harvard Medical Schools premier teaching sites. Her idea of absolute heaven is a day filled with nothing but her computer, her dog and her coffee pot and the Brothers, of course.
Sharon Stogner at 12:00 PM
Share