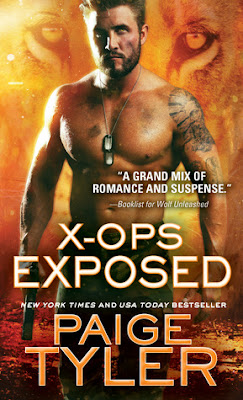 Lion hybrid and former Army Ranger Tanner Howland retreats into the forests of Washington State to be alone—he’s too dangerous to be around people. He had to leave the love of his life behind but little does he know, she followed him.

Dr. Zarina Sokolov has an anti-serum she hopes will make Tanner human again. But before she can convince him to take it, they discover he isn’t the only hybrid that survived the experiment. And there are people who want to use the hybrid shifters for sport, pitting them against each other for money. But does Tanner have what it takes to save his fellow hybrids and Zarina—or will he lose control again?

Eight books, can you believe it? Eight books into Paige Tyler’s X-Ops series and things are going in a direction that could lead to a major battle for survival. I don’t know about anyone else but I’m excited.

Tanner has been a character that I’ve wondered about since he stepped onto the pages of the first book. As a shifter hybrid, Tanner was created in a lab and therefore had most of the characteristics of the hybrids. He was stronger and faster than natural born shifters but like other hybrids, he was also wild, uncontrollable, and very dangerous. But he also had a deep connection with Zarina, a doctor that was being held prisoner along with him. Their connection has been shown in all the books leading up to this one and it really is a special one.

Throughout the series, Zarina has been trying to help Tanner control his more savage urges and for the most part, it had been working, until an event forced Tanner to unleash his hybrid side and he accidentally attacked a friend. That freaked him out enough that he left the DCO where he’d been staying to live in the woods. Naturally, Zarina followed him and was almost mauled by a bear until Tanner showed up to chase it off. Zarina stubbornly refused to leave him and Tanner has no choice but to keep her with him. Not that it’s a hardship, these two have always shown how much they care for each other even if they never officially crossed the line into lovers until now. Of course, nothing is ever easy and soon they find out that Tanner wasn’t the only hybrid survivor and that humans now want to use them for sport, pitting hybrid against hybrid for money.

Fans of the series already knew Tanner and Zarina were deeply in love but the thing was these two characters hadn’t openly admitted it to anyone. X-Ops Exposed did justice to their relationship by first showing just how special and deep their connection ran. Zarina was the sole calming influence on Tanner’s otherwise dangerous hybrid side and Tanner brought Zarina comfort and solid friendship. Paige Tyler then puts these two in situations where they spent a lot of time alone together without the prying eyes of the DCO and their shifter friends. Their romance seemed so natural and so right while at the same time hot and sexy. It was during their moments together that you get to see a more lighthearted, charming side of Tanner. He’s happy for once whereas before he had this sense of doom around him. After eight books of him being Mr. Negative/Emo, I did a double take at the new side of him. It was refreshing and kept the character from feeling stale and becoming predictable. As did the setting for this book.

X-Ops Exposed takes readers away from the DCO to see how “The Other Half Lives” aka shifters and hybrids who weren’t picked up by the DCO and are having to scratch a living for themselves in hiding. I’m hoping that the hybrids have a larger role to play in future books since they’ve been popping up so much recently.

With eight books down, there are a lot of characters at this point and I’m sure many more to come. I enjoyed the quick “check-ins” with most if not all the characters from previous books and I just realized that up until this point I haven’t had a favorite couple from this series. This is unheard of for me! By this time in a series, I usually have a stand out favorite but the series is so much fun and the characters have all been on equal standing with me that I haven’t said: “Oh my gosh this one is my favorite!” They all have something special.

As it has been since the beginning, I enjoyed this book. It was definitely more on the romantic side because Tanner and Zarina’s emotions have been building up in the background of previous books and if you’re a fan of longing, friendship, and love then X-Ops Exposed might end up being your favorite in the series.

Paige Tyler’s paranormal romances are easy on the reader and that’s part of their appeal in my opinion. There’s more emphasis on characters, romance, and plot than on saturating it with paranormal aspects. I love that I can get my dose of paranormal without getting a headache with massive info dumps about species of creatures, histories of those creatures, feudal families, etc. The X-Ops series is straight up romantic suspense with paranormal elements. That means that each book can easily be read as a standalone but I will admit that readers will get the most out of them if they’re read in order.

About the Author:
Website | Facebook | Twitter
Goodreads
Paige graduated from The University of West Florida with a degree in education in 2000, but decided to pursue a full-time career as a writer in 2004. Since then, she’s written over fifty books in several genres, including paranormal, contemporary, western, sci-fi and erotica. She loves writing about strong, sexy, alpha males and the feisty, independent women who fall for them. From verbal foreplay to sexual heat, her stories of romance, adventure, suspense, passion and true love will leave you breathlessly panting for more.

She and her very own military hero (also known as her husband) live on the beautiful Florida coast with their adorable fur baby (also known as their dog). Paige graduated with a degree in education, but decided to pursue her passion and write books about hunky alpha males and the kickbutt heroines who fall in love with them.

When not working on her latest book, Paige enjoys reading, jogging, P90X, Yoga, Pilates, going to the beach, watching NFL football, watching movies and hanging out with her husband (not necessarily in that order!)