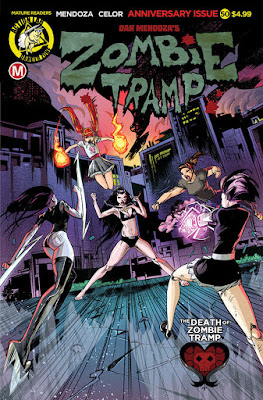 It Was a Bit Too Much!

Warning: The following comic has extreme violence, gore, frontal nudity, and makes very frequent use of profanity. This may not be recommended for the overly devout, the overly sensitive, the weak hearted, or your Great Aunt Susan (you know, the one who lives alone with all the cats.)

All in all, I don’t think it was a bad comic. In fact, Vampblade made an appearance. (I can get into some Vampblade.) In hindsight, with a name like Zombie Tramp, I should have been a little more prepared. This was the fiftieth issue, part two of “The Death of Zombie Tramp”. There is a lot going on in this one. Janie Belle, the Zombie Tramp, has become the prophesied savior of an army of the dead. Her plan seems to be nothing less than world domination. She must be stopped, but can she be? Find out in this issue!

The cover with the promise of an extreme battle. 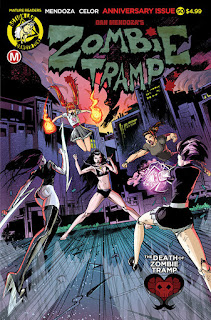 Janey Belle is Zombie Tramp. She’s not a typical zombie. She get’s her power from the Necronomicon {Or the Book of the Dead). She can change form, has a soul that can jump from body to body, and has her own zombie army! She’s bad and she owns it! Trust me, she’s got plans and things are about to get real dark really quick. In the comics that lead up to this one. Janey’s darkness seems to be on the incline. She seems to be getting darker and eviler by the issue. She’s actually reveling in her evilness. (Yeah, I said reveling. I definitely saw some reveling.) Her crossover from antihero to world-threatening villain was in full swing in this issue, but one gets the impression that it had been a long time coming. 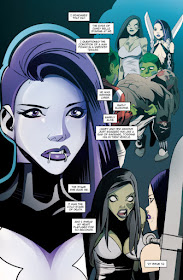 Needless to say, the Zombie Tramp battles it out in this issue with Vampblade, Dollface, Black Betty, and other characters from the Action Labs universe. If an extreme battle with lots of gore between comic book Femme Fatales and zombie hordes and their queen is what you’re looking for, then this may be the comic book you don’t want to miss!
The artwork and colors are big and bold with lots of greens and purples. The tone of the comic art seems most appropriate for its’ subject matter. There’s a lot going on so I would recommend reading the previous five issues before reading this one. If you’re not familiar with the other characters in the Action Labs Universe you might get a little lost, but they fill in some of the back story.
eep. (There were three but the zombies ate half of one. Gross
Personally, I give it two and a half sh!)