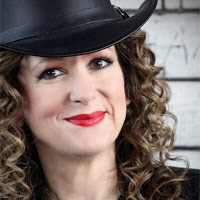 We got a chance to ask Laurell a few questions during her book tour for the latest Anita Blake: Serpentine. Also, check out DeniseB's review of Serpentine at the end of the interview.

Welcome to I Smell Sheep! Have a moon pie and a glass of Kool-Aid (It’s Sharkleberry Fin cause shark week is coming soon.

DeniseB: How many more books are you planning on writing in this series?
Laurell: I’d always seen the Anita Blake series as a mystery series which means there’s no end planned. I’ll keep writing the books as long as the readers and I are enjoying ourselves.

Sharon: If you made a bouquet of flowers to represent you. What flowers would you include?
Laurell: I was asked a question almost identical to this in my first college writing course when I was eighteen. I had no idea how to answer it, and I still don’t.

DeniseB: Do you have any plans for a spinoff series based on a few of the secondary characters from the Anita series.
Laurell: Not really. Anita is a first-person narrative so without her as my camera on the world I’m not sure how that would work.

Sharon: If you could own any piece of art in the world, which one would you want?
Laurell: In college, it would have been The Incredulity of St. Thomas by Caravaggio. Now, I honestly don’t know.
DeniseB: How much of your personal life influences the stories?
Laurell: Not that much actually. In fact if anything my fiction is ahead of my personal life, not the other way around. Example, I was researching bondage and submission for the books before I entered the lifestyle myself. Just as Anita was poly before I realized I was, too.

Sharon: What is the nerdiest thing you own?
Laurell: Our dining room looks like an armory from Lord of the Rings. We own all but two of the weapons from the original movie trilogy.

Thanks to Laurell for taking the time to talk with us and to Berkley, Penguin Random House for arranging it. 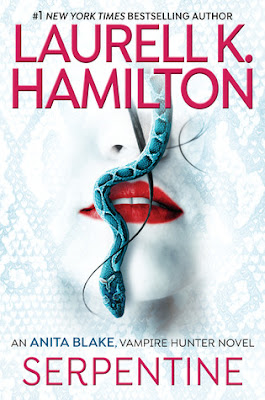 by Laurell K. Hamilton
August 7, 2018
Pages: 496
Vampire hunter Anita Blake has managed to overcome everything she faces. But this time there's a monster that even she doesn't know how to fight...

A remote Florida island is the perfect wedding destination for the upcoming nuptials of Anita's fellow U.S. Marshal and best friend Edward. For Anita, the vacation is a welcome break, as it's the first trip she gets to take with wereleopards Micah and Nathaniel. But it's not all fun and games and bachelor parties...

In this tropical paradise Micah discovers a horrific new form of lycanthropy, one that has afflicted a single family for generations. Believed to be the result of an ancient Greek curse, it turns human bodies into a mass of snakes.

When long-simmering resentment leads to a big blowout within the wedding party, the last thing Anita needs is more drama. But it finds her anyway when women start disappearing from the hotel, and worse--her own friends and lovers are considered the prime suspects. There's a strange power afoot that Anita has never confronted before, a force that's rendering those around her helpless in its thrall. Unable to face it on her own, Anita is willing to accept help from even the deadliest places. Help that she will most certainly regret--if she survives at all, that is...

Edward and Donna are having a destination wedding in the Florida Keys, where a family has been afflicted with an unfamiliar strain of lycanthropy for generations. Anita, Micah, and Nathaniel head down there for some together time that has been largely lacking in their relationships. Even though Anita has every intention of just being Edward/Ted’s best man, and having a romantic weekend with her guys, trouble seems to find her. The wedding party is full of drama at every turn, and when the police are called to investigate a possible kidnapping, new problems arise for everyone involved.

Hamilton writes fantastic stories that are filled with sex, vampires, shifters, and monsters you can’t even imagine. After 26 books you would think that the stories would get boring or unimaginative, but she’s still got it and is going strong. I would say my only criticism is that there were not enough love/sex scenes. Her books are famous for them, and there was hardly any, even though there was a lot of focus on Anita and her poly relationships. In today’s day and age, this is a great storyline with sexual fluidity being prominent in the headlines. It would be nice if Hamilton explained a little more on how some of the relationships work for those that are not familiar with the new terms.


About the Author:
website-FB-twitter
Laurell K. Hamilton is one of the leading writers of paranormal fiction. A #1 New York Times bestselling author, Hamilton writes the popular Anita Blake, Vampire Hunter novels and the Meredith Gentry series. She is also the creator of a bestselling comic book series based on her Anita Blake novels and published by Marvel Comics. Hamilton is a full-time writer and lives in the suburbs of St. Louis with her family.