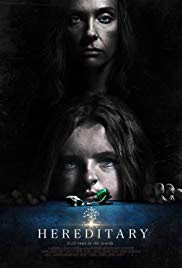 Hereditary
In Theaters: Jun 8, 2018
On Disc/Streaming: Sep 4, 2018
Directed By: Ari Aster
Written By: Ari Aster
Genre: Drama, Horror
Cast: Toni Collette, Milly Shapiro, Alex Wolff, Gabriel Byrne
Rating: R (for horror violence, disturbing images, language, drug use, and brief graphic nudity)
Runtime: 127 minutes
Studio: Windy Hill Pictures
When Ellen, the matriarch of the Graham family, passes away, her daughter's family begins to unravel cryptic and increasingly terrifying secrets about their ancestry. The more they discover, the more they find themselves trying to outrun the sinister fate they seem to have inherited. Making his feature debut, writer-director Ari Aster unleashes a nightmare vision of a domestic breakdown that exhibits the craft and precision of a nascent auteur, transforming a familial tragedy into something ominous and deeply disquieting, and pushing the horror movie into chilling new terrain with its shattering portrait of heritage gone to hell.


Hereditary may go down as the single most disturbing and well-produced horror movie since The Exorcist. As an avid watcher of horror films most (and especially in the past few years) fail terribly at being well, horror. They either go one of three routes: campy, a bloodfest, or relying on jump scares.

Hereditary took that low bar and raised it to perhaps an unreachable level, boasting an 89% on Rotten Tomatoes it’s a 2018 must see. While there is gore it’s not the main focus, it doesn’t rely on jump scares and it’s anything but funny. The two-hour film starts off with the death of the main character Annie’s mother. Quite quickly you learn the family of four is anything but idyllic. Annie seems to suffer from some form of mental illness (much like her "schizophrenic" mother) as does her daughter, Charlie. The father, Steve, seems uncaring and distant and their son, Peter, is your typical moody and apathetic teenager.

The movie is shot in dreary and blue tinted colors which only adds to the growing feeling that something terrible is about to happen. Without giving too much away about what can only be called The Scene, the movie slaps you hard in the face after the family suffers an unimaginable tragedy after a high school party. The scene its self doesn’t show much, but I’ve never in my decade-plus of watching horror films been left with such a disturbed and uneasy feeling. The agonizing screams of a mother are hard to reproduce, and yet Heredity does it with shocking accuracy.

From there, things escalate with Annie meeting another grieving mother who seems to only want to help, but it becomes clear in the second part of the movie that she has done anything but. As most supernatural movies go, things get worse and worse until the climactic finale when everything is revealed.

Well, almost everything, the movie does have some faults, and those mainly lay in the ending. Much is left unexplained, which may be the point, but it still felt a bit meh compared to the rest of the movie. Personally, I looked up explanations of the film online afterward to try and piece together what had been left unsaid. This is where the movie’s title comes into play as you’re left wondering if what is "hereditary"is a supernatural curse, mental illness or just a portrayal of a family going through grief.

Like many other movies, Hereditary probably deserves your attention a couple of times to catch all the symbolism and foreshadowing. After a night of disturbing dreams though I may wait a bit to rewatch it.

Despite the ending which felt rushed, Hereditary is without a doubt the best horror movie of 2018. So why then has Bird Box taken all the hype? Simply put, because Hereditary is too disturbing, too scary and too real. Bird Box is thrilling but ends happily, Hereditary does not. If you’re looking to actually be scared though, to be shaken to your core than stream Hereditary but never alone…

You can stream it on Vudu, Youtube, iTunes, Google Play and Amazon Prime btw


When you sign up for Vudu (it's free) you get one rental at $1 and you can use it on this one otherwise it's $5 on all platforms.