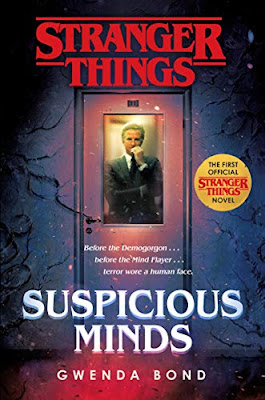 Stranger Things: Suspicious Minds: The first official Stranger Things novel
by Gwenda Bond
February 5, 2019
Publisher: Del Rey
ASIN: B07DBQR8T1 ISBN: 9781984800886
A mysterious lab. A sinister scientist. A secret history. If you think you know the truth behind Eleven’s mother, prepare to have your mind turned Upside Down in this thrilling prequel to the hit show Stranger Things.

It’s the summer of 1969, and the shock of conflict reverberates through the youth of America, both at home and abroad. As a student at a quiet college campus in the heartland of Indiana, Terry Ives couldn’t be farther from the front lines of Vietnam or the incendiary protests in Washington.

But the world is changing, and Terry isn’t content to watch from the sidelines. When word gets around about an important government experiment in the small town of Hawkins, she signs on as a test subject for the project, code-named MKULTRA. Unmarked vans, a remote lab deep in the woods, mind-altering substances administered by tight-lipped researchers . . . and a mystery the young and restless Terry is determined to uncover.

But behind the walls of Hawkins National Laboratory—and the piercing gaze of its director, Dr. Martin Brenner—lurks a conspiracy greater than Terry could have ever imagined. To face it, she’ll need the help of her fellow test subjects, including one so mysterious the world doesn’t know she exists—a young girl with unexplainable superhuman powers and a number instead of a name: 008.

Amid the rising tensions of the new decade, Terry Ives and Martin Brenner have begun a different kind of war—one where the human mind is the battlefield.

There are four main characters in this book: Terry Ives (Eleven’s mother), Alice, Gloria, and Ken. Except for Alice, who is a local resident and works at her uncle’s garage as a mechanic, the other three go to college in Bloomington, Indiana. Important secondary characters are Terry’s boyfriend, Andrew (Eleven’s father), her sister, Becky, and college roommate, Stacey.

All four of the main characters are part of the MKUltra research, and subjected to terrible things by Dr. Brenner, all in the name of his trying to make super psychics and protentional weapons for the military (this is set in 1969, during the Vietnam War) As season one of the show has hinted, Dr. Brenner is researching the powers of the human mind and creating superpowered people - like Kali (Eight) and, eventually, Eleven. Gwenda Bond’s flesh-out references to the time (I suspect the title, Suspicious Minds, is based on the song by Elvis Presley that came out August 1969), and the Vietnam War are spot on, and the characters are well-rounded. After knowing Dr. Brenner's thoughts and motivations, makes me despise him all the more.

You don’t have to watch the TV show, Stranger Things, to enjoy this novel. Yes, there are a few references to the show with Eight (Kali) and Eleven, even the Upside Down and the monsters, but even those who have never seen the series can pick this up to read. The novel has a great mix of paranormal, late 60s/early 70s counter-culture history, government conspiracy, science fiction, and horror, to have something for everyone. 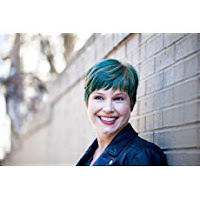 About the Author:
website-FB-twitter
Tumblr-Instagram
Gwenda Bond is the author of many novels. Among others, they include the Lois Lane and Cirque American trilogies. She created Dead Air, a serialized mystery novel and scripted podcast written with Rachel Caine and Carrie Ryan. She and her husband Christopher Rowe also co-write a middle grade series, the Supernormal Sleuthing Service. She co-hosts Cult Faves, a podcast about the weird world of cults and extreme belief. Her official Stranger Things prequel novel, Suspicious Minds, releases in 2019. She writes a monthly-ish letter you can sign up for at www.tinyletter.com/gwenda. Visit her online at www.gwendabond.com or @gwenda on Twitter.