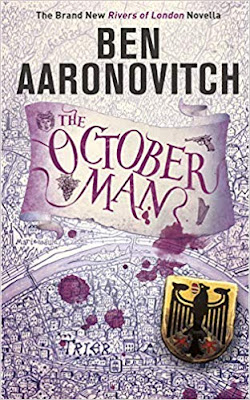 The October Man (Rivers of London)

by Ben Aaronovitch
May 31, 2019
216 pages
Publisher: Subterranean; Deluxe edition
With this long new novella, bestselling author Ben Aaronovitch has crafted yet another wickedly funny and surprisingly affecting chapter in his beloved Rivers of London series. If you thought magic was confined to one country—think again. Trier: famous for wine, Romans and being Germany's oldest city. When a man is found dead with his body impossibly covered in a fungal rot, the local authorities know they are out of their depth. But fortunately this is Germany, where there are procedures for everything. Enter Tobias Winter, an investigator for the Abteilung KDA, the branch of the German Federal Criminal Police which handles the supernatural. His aim is to get in, deal with the problem, and get out with the minimum of fuss, personal danger and paperwork. Together with frighteningly enthusiastic local cop, Vanessa Sommer, he quickly links the first victim to a group of ordinary middle aged men whose novel approach to their mid-life crisis may have reawakened a bloody conflict from a previous century. As the rot spreads, literally, and the suspect list extends to people born before Frederick the Great, Tobias and Vanessa will need to find allies in some unexpected places. And to solve the case they'll have to unearth the secret magical history of a city that goes back two thousand years. Presuming that history doesn't kill them first.

"Life is too short to drink bad wine."

Take the true rituals of any police detective (mundane research, interviewing, etc), mix it with some "learned" magical ability, include a smattering of new acronyms and you have the story of The October Man.

A collection of 5 men form a "Good Wine Drinking" club. One dies of a magically infected grape processing fungus and thus begins the investigation by a "magically" learned inspector and his "normal" but enthusiastic female partner.

The writing is exemplary. No unnecessary wording, the story flows well and with little drag. I have a mixed bag of feelings about this story. I loved the writing but found the story a little mundane for my taste. I felt the character development a little scant and found myself wanting more information about some of the secondary players. I didn't necessarily need it but thought it might bring a little more depth. I was not "hooked" from the beginning, but the easy format kept me persevering and I am happy I did.

I loved the characters! I can definitely see sequels to this book and think they would be well received if a little more action and meat were added. I predict this just might be an introductory story to some great follow up episodes! 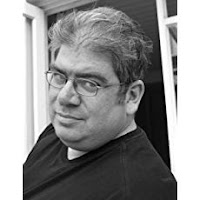 About the Author:
website-FB-twitter
blog
Ben Aaronovitch was born in 1964. Discovering in his early twenties that he had precisely one talent, he took up screenwriting at which he was an overnight success. He wrote for Doctor Who, Casualty and the world's cheapest ever SF soap opera Jupiter Moon. He then wrote for Virgin's New Adventures until they pulped all his books.

Then Ben entered a dark time illuminated only by an episode of Dark Knight, a book for Big Finish and the highly acclaimed but not-very-well-paying Blake's 7 Audio dramas.

Trapped in a cycle of disappointment and despair Ben was eventually forced to support his expensive book habit by working for Waterstones as a bookseller. Ironically it was while shelving the works of others that Ben finally saw the light. He would write his own books, he would let prose into his heart and rejoice in the word. Henceforth, subsisting on nothing more than instant coffee and Japanese takeaway, Ben embarked on the epic personal journey that was to lead to Rivers of London (or Midnight Riot as it is known in the Americas).

Ben Aaronovitch currently resides in London and says that he will leave when they pry his city from his cold dead fingers.
Sharon Stogner at 12:30 AM
Share