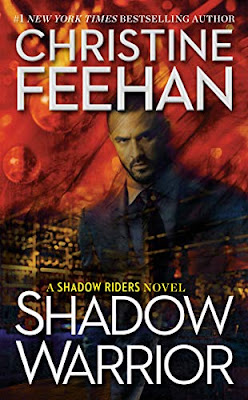 Vittorio Ferraro is a man whose family loyalty knows no bounds. He would die for his siblings and the people they love, but what he really wants is to start a family of his own. Deep down, Vittorio has always known finding a woman who could ride shadows would be nearly impossible—let alone one who could accept his particular needs—and he never expected to find her in the middle of a kidnapping.…

Grace Murphy has always been drawn to Vittorio Ferraro—or at least to the billionaire’s public bad-boy persona. Now that she’s under his protection and the sole focus of his intense caring, she can’t help wanting to get as close to him as possible. But Grace knows her presence is putting the entire Ferraro family in danger. Her monster of a brother will never let her go, but Vittorio has no intention of losing the woman whose shadow matches his own.

Reviewer: Mary Kirkland
I give this book 5 sheep.

The Ferraro family ride the shadows, making sure justice comes to those who deserve it. Vittorio was home from one such mission when his entire being becomes on full alert. He knows without a doubt that trouble is somewhere close and he needs to get there. Once he reaches his family's club, he follows the shadows to where his senses tell him the trouble is coming from. He finds several people from the Saldi crime family in the club and follows them outside where a woman is being held in the trunk of a car. Something inside him breaks wide open when he sees her and when she gets hurt, he comes to her rescue. Vittorio's family show up within seconds, also having rode the shadows to get to him. None of them are happy when they find out that the Saldi's were doing business in their club.

Grace spends a couple of weeks in the hospital after she's kidnapped and hurt. Vittorio spends as much time with her as he can and takes over her welfare and care. Grace has had a really hard life and doesn't trust people easily but she trusts Vittorio. When she is released from the hospital, he takes her back to his home because it's the safest place for her since there's a psychopath stalker after her and anyone she's close to. The stalker seems to be able to get incredibly close to her. The stalker aspect of the story was also kinda mysterious because he's killed people and never gets caught doing anything. It's was great to see where this storyline was going.

I really liked watching Vittorio and Grace get to know one another and get closer. She's such a sweet person and so right for Vittorio who thinks of himself as not such a nice person. He never thought he would find a woman who would be willing to put up with him but he's actually a lot nicer than he gives himself credit for.

The rest of the Ferraro family make appearances in this book and as always their mother causes more problems. That woman really gets on my nerves. I can only hope that something soon will change the way this woman treats her kids.

This series has quickly become one of my all-time favorites. The Ferraro family are so interesting and the fact that they can ride the shadows in order to travel from one place to another is a really unique twist that I hadn't read before. I like that they take it upon themselves to bring down the bad guys and get justice to those who deserve it. They might seem like the bad guys because they do kill people but they do it for the right reasons.

It's hard to pick a favorite book from this series but this was definitely one of my favorites. The characters are so engaging and interesting. The storyline is so unique as well as action-filled and it's so easy to get completely swept away in the story.

If I could give this book more sheep than 5, I would because it was just that good!

Shadow Warrior is the fourth installment in Christine Feehan’s Shadow series. The series chronicles the Ferraro family, perceived crime organization, but actual supernatural assassins for hire. The family is a tight-knit, fiercely furtive, protective group. Despite their image, the family is benevolent and just, dispatching only the worst of offenders. The supernatural aspects of this series are quite subtle. The so-called “shadow riders” dissolve into and ride shadows as tiny expressways to their desired location completely unseen. Their reputation is a smokescreen for their vigilante work. Anyone brought into the family is brought in for life.

Each book in the series has unpacked the romantic story of one Ferraro brother and his burgeoning relationship with a woman. The Shadow Warrior is Vittorio. Not much differentiates the brothers, really. They’re all tall dark and handsome with a dangerous edge. They’re all domineering, wishing to absolutely consume their women. They all whisper sexy Italian phrases in their lovers’ ears. For the most part, I’ve been okay with this. Variety is created with the female characters well enough.

Grace Murphy, the object of Vittorio’s affection, is a woman running scared. When Vittorio Ferraro intercepts her kidnapping, the connection is immediate and over-the-top dramatic. Feehan, while not exactly original, expertly crafts a love story. The mounting tension and ultimate release are always abundantly entertaining.

What sets Shadow Warrior apart is its plot. I found it to have a menacing, more tension-filled, thriller vibe. The big bad in the story, Grace’s foster brother, is beyond dark. His psychopathic actions lend a darkness to the book I found both disturbing and intriguing. Feehan is a safe bet, every time, for paranormal romance fans and the Shadow series is no exception.


EXCERPT:
It was just her luck to be in the worst possible circumstances when she met the hottest man in the entire world. Grace Murphy wished the earth would just open up and swallow her, hospital bed and all. The Ferraro family certainly had a strong sense of responsibility when it came to someone getting shot in their parking lot. Even that was embarrassing, having her own foster brother try to sell her into prostitution to pay his gambling debts.

She was like everyone else, following the life of the Ferraros in magazines bought at the grocery store or flipped through at the beauty parlor. She’d always been drawn to Vittorio, finding herself reading every single thing about him. Now, here he was in person, sprawled out in a chair, more beautiful than the photographs could capture, as big as life. Bigger even, the reality of him taking up an enormous amount of space, his wide shoulders and long legs keeping her attention riveted on him.

She groaned aloud and covered her red face with one hand. He’d been there every single day. Right there. In that chair. Pacing around the room. Talking on his cell. It didn’t matter what he was doing, he saw to her every need. He noticed before she did that her pain level was rising, and he took care of it. He didn’t like the food they were serving her, and she was given catered, very nutritious meals for breakfast, lunch and dinner. She hadn’t been able to feed herself those first few days and he had been the one to sit on the edge of her bed and feed her.

The first week after she’d been shot and operated on, there’d been so much pain she could barely breathe, and she hadn’t been able to fully comprehend who he was. Mostly, she’d slept and thought she was dreaming. One of the nurses had referred to him as her fiancée and she had been confused. She’d started to correct her, but then looked beyond her to see Vittorio Ferraro hovering behind the woman.

Their eyes had locked. Had she known that eyes like his existed in real life? She’d been captivated. Spellbound. Unable to think. Those eyes had turned her brain to mush. Her heart had leapt to her throat. Grace had felt as if he was willing her not to speak, not to contradict what the nurse was saying—and she hadn’t. Then the morphine had kicked in and the pain had gone enough for her to drift off.

His voice. It was beautiful. Low. Soothing, yet at the same time, there was absolute command, as if he ruled the world and knew it. She’d heard that voice in the parking lot, stopping everyone, giving him the chance to act, to save her from the two men Haydon was selling her to for his debts.

Vittorio remained silent after just saying her name. She couldn’t help but look at him, that tone compelled her to raise her gaze to his no matter how reluctant she was. It took her a few moments to gather the courage to meet those eyes. Deep blue, like the deepest, clearest sea. She felt as if she were drowning when she looked into his eyes.

She touched her tongue to her lips—the lips he’d personally applied lip balm to—and lifted her lashes. At once she had the strange sensation of falling, of tumbling into those dark depths, and there was no saving herself. Her heart beat wildly and, in her veins, there was a rush of heat that spread through her body like a wildfire.

She had no idea how he could make her want to tell him the truth, no matter that she wanted to hide it from him. She didn’t want to admit that he was the problem, that he was that fantasy she went to bed with every night, and now he was there, larger than life, and way more than she could ever handle. She’d watched him at every charity event, sometimes nearly forgetting her job, which was to stay behind the scenes and make certain everything ran smoothly.

Again with the name. It sounded so different when he said it. She’d always thought her name plain. Old-fashioned. When Vittorio said it in that enthralling tone, she liked the way it sounded.