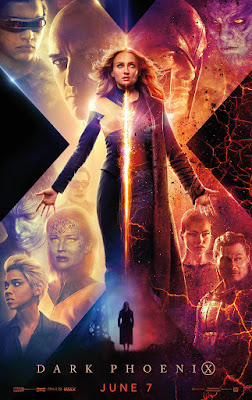 Jun 7, 2019
Directed By: Simon Kinberg
Written By: Simon Kinberg
Cast: James McAvoy, Michael Fassbender, Jennifer Lawrence, Nicholas Hoult, Sophie Turner, Tye Sheridan
Rating: PG-13 (for intense sequences of sci-fi violence and action including some gunplay, disturbing images, and brief strong language)
Genre: Action & Adventure, Drama, Science Fiction & Fantasy
Studio: 20th Century Fox
In DARK PHOENIX, the X-MEN face their most formidable and powerful foe: one of their own, Jean Grey. During a rescue mission in space, Jean is nearly killed when she is hit by a mysterious cosmic force. Once she returns home, this force not only makes her infinitely more powerful, but far more unstable. Wrestling with this entity inside her, Jean unleashes her powers in ways she can neither comprehend nor contain. With Jean spiraling out of control, and hurting the ones she loves most, she begins to unravel the very fabric that holds the X-Men together. Now, with this family falling apart, they must find a way to unite -- not only to save Jean's soul, but to save our very planet from aliens who wish to weaponize this force and rule the galaxy.

Maybe all the bad press about Dark Phoenix had me going into the movie with low expectations, but I enjoyed it.  I went with my husband and 18-year-old daughter. My husband agreed with me. My daughter, who isn't a big X-Men fan, wasn't as impressed with it. She said there wasn't a cohesive plot. I must have been so caught up in the awesome X-Men fighting scenes that I didn't notice the lack of plot. I thought this had the best action/fight scenes of all the X-Men movies.

The X-Men were more bada$$ compared to the other films. Beast was a flocking BEAST! Rawr! I love me some Michael Fassbender but Magneto is a fickle character. He flips loyalties way to quick. I really like the Jean Grey character...kind of got a girl-crush on Dark Phoenix. All those Cherik fans (if you don't know what that is then you aren't one and forget I said it) are gonna have fuel for that fire.

My husband and I thought it was worth seeing. It looked good in IMAX. Our daughter didn't. I haven't gotten a rating from her but I would guess she'd give it 3 or 3 1/2.

*There was no post-credit scene.