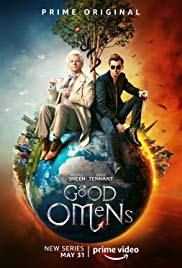 Stars: David Tennant, Michael Sheen, Frances McDormand
A tale of the bungling of Armageddon features an angel, a demon, an eleven-year-old Antichrist, and a doom-saying witch.

Having a book you love turned into a movie or show can be nerve-wracking. Let's face it: fans love things for different reasons and not everyone is going to be happy. Sometimes people helming the ship somehow don't get or ignore why people love a thing so much and miss every opportunity to do something amazing.

I should say here and now that it's been a while since I've read Good Omens, but I think that also helped me detach from my love of the book and watch the show as its own entity. I know there are differences, but I can't speak to specifics and obviously I'm not that hung up on them.

You guys, this is so good. For me, it *feels* like the book. It has the same energy, momentum, humor, and quirkiness. All of the characters are given time to be introduced and grow, and I never felt like the plot or world building runs away with anything or any of the cast was in over their heads. Everything felt committed to the story, which is what you really need with anything by Pratchett and Gaiman. If anything, this makes me want to reread the book right now.

The casting is excellent - David Tennant and Michael Sheen are magic, but truly everyone is fantastic in their roles. I love a lot of the background casting and how characters actually fit their time periods and regions in the flashback bits. The horseman are fun, John Hamm is a great choice for Gabriel, the kids are realistic. I don't think there was a single casting choice or actor that felt wrong to me.

The effects fit the vibe of the story, and the script rings true to the book. And yes, there is Queen. So much Queen, and used in the best ways. Be warned, that joke is never explained in the show, so if you're going in blind, there are still things worth reading the book for.

My only issue was occasionally the pacing seemed to drag - I mostly noticed it in the cuts back to Adam and his friends in the woods. Those scenes were so similar after the first few, but I get the point of trying to break up other action.

If the more tongue in cheek and quirky bits aren't for you, well that's what this is. It's funny and insightful and unnerving in turn.

If this book is your Bible, I'm sure there's something I'm not catching that may set you off. If you go in with the idea that this is an adaptation (and a very good one), I think you'll love it. If you haven't read the book, you will absolutely enjoy it if you love the authors and know their styles.

4.75 sheep of the apocalypse

About the Author:
website-FB-twitter
Selah Janel is a writer who is trying to start doing that again instead of reading manga all the time.
Sharon Stogner at 12:30 AM
Share