If you’re looking for some summer reading, you’ve come to the right place! My Hawthorn Moon blog tour is a great time to catch up on the latest titles, find out what’s coming soon, and get a behind-the-scenes peek at the characters and the series.
Come check out what’s new and have a look at the coming attractions from Gail Z. Martin and Larry N. Martin!
LINK

I Smell Sheep is spotlighting The Splintered Crown, the first in a brand new series by Larry N. Martin because...
Look. At. That. Cover! Love it! 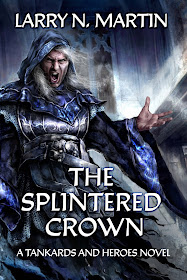 The Splintered Crown: A Tankards and Heroes Novel
by Larry N. Martin
April 25, 2019
200 pages
A medieval fantasy with a party of adventurers all ready to make a name for themselves and earn some gold.

Tankards and Heroes is set in the city of Kortufan, where spies, assassins, mercenaries, arms dealers, rebels, smugglers, and informants do dirty deals dirt cheap.

The Poxy Dragon is a rough bar outside the worst part of the medieval Silk Road. It takes serious courage just to walk into the place, not only from its reputation but because of the rough clientele, questionable food, awful beer, and abysmal hygiene. Lots of taverns in Kortufan are home to ruffians and illegal dealings, but the Poxy Dragon is the proving ground for heroes - with a cemetery out back for the ones who don’t make the cut.

Lady Leota, the resident demigoddess at the Poxy Dragon, sends would-be heroes to different realms on quests. Once committed, there is no turning back, and if they want their reward, every party member must return through the portal – dead or alive.
Amazon


The Splintered Crown
Excerpt One:
“Got any ale that doesn’t taste like donkey piss?”


The stranger’s companion laughed heartily at his friend’s joke and didn’t seem to notice that the regulars at the bar took a step away from them. The bard in the back stopped his song mid-stanza.

“Don’t know what you’re complaining about,” Tom, the bartender, replied. “That’s a step up. Used to taste like donkey’s balls. And before that—”

“Gods and cuttlefish, man! How about your whiskey then? I just want something that doesn’t taste as bad going down as it might coming back up, if you know what I mean,” the stranger said.

He looked like the sort of man who would find his way to the Poxy Dragon tavern—big, tall,
inked, and mean as a wolverine. His shoulder-length dark hair was greasy and tangled, and his long beard had braids and brass beads in it, like that made him a pirate. Tattoos in black and red wound around both arms and peeked from the throat of his tunic. One, a black snake, slithered its way up his bicep. Tom figured that was as good a name as any for the stranger, Snake. Not like it mattered. He wouldn’t be back.

Snake’s buddy stood half a head shorter and maybe twenty pounds lighter, probably his
lookout and lackey, Tom thought. No tattoos. Reddish blond hair and a beard to match, he looked at least a decade younger than Snake. “Red” would do.

“Suit yourself.” Tom poured a glass of the house whiskey and slid it to Snake. He kept his expression unreadable, although if Snake and Red knew what was good for them, they’d have taken note of the way the regulars leaned in to watch but didn’t get any closer.

Snake tossed off the shot and thumped his chest like he’d proven something. Red hooted, as if taking the drink was an accomplishment. Tom and the others waited for the reaction.

Three…two…one….
“What…what…” Snake tried to say something else, but between the way he gasped for air,
lips working like a fish out of water, and the tears running down his face from the potent liquor, he was in too much distress.

“What did you give him?” Red demanded. “You poisoned him!” His face grew as red as his
hair, and he looked as if he intended to go over the bar at Tom.

Tom wasn’t worried. Red probably weighed less than the sack of cabbages in the kitchen.

“Should I dig a hole out back?” Thaddeus had wandered in at the first sounds of distress. The old undertaker had his favorite shovel, Bessie, slung over one shoulder. Mud caked his pants and dirt streaked his face and hands. Tufts of white hair stuck out over his nearly bald head and peeked from inside his ears. He looked at Tom with great excitement, anticipating the task. 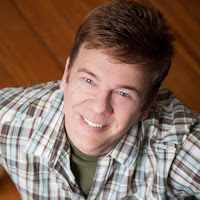 About the Authors:
website-@GailZMartin-@LNMartinauthor
Facebook-DisquietingVisions blog
GhostInTheMachinePodcast-Goodreads
Wattpad
Join our Shadow Alliance street team so you never miss a new release! Get all the scoop first + giveaways + fun stuff! Also where I get my beta readers and Launch Team! https://www.facebook.com/groups/435812789942761 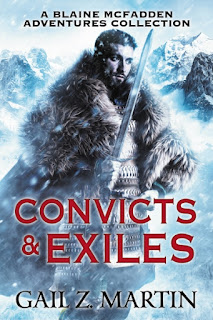 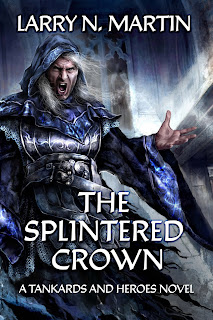 Win a copy of The Splintered Crown and Convicts and Exiles here: http://www.rafflecopter.com/rafl/display/9751c04221/?
Sharon Stogner at 12:30 AM
Share