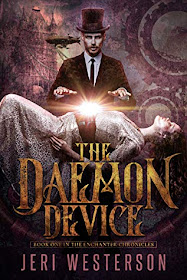 October 2, 2019
341 pages
London, 1891. Prince Albert has survived his brush with death. Dirigibles, like dark leviathans, surge through the sooty air of London. Steam powers the engines that supply electricity to the new electric lights along the Thames. And Jack the Ripper appears to be on the loose again on the seamy streets.

Someone is killing women and gutting them for their body parts. Is it Jack, or a far more sinister plot afoot than murder?

Leopold Kazsmer is a magician, the Great Enchanter. Ashamed of his Jewish-Gypsy heritage, he has fashioned himself into a proper English gentleman, though he harbors a carefully guarded secret; He has learned the dangerous art of summoning daemons. When he was a child, a tattoo was bestowed upon his wrist by the denizens of the Otherworld…the same night his father was killed. Though it gives him true magical powers once he’s made a sacrifice of blood, it is also his curse, for through it the creatures of nightmares have become aware of him.

With the help of Raj, a tarot-reading automated man, and Eurynomos, a shrewd Jewish daemon who helped Leopold through his tragic childhood, Leopold must discover what is behind the revolting murders that suddenly seem to involve tight-lipped German scientists, guarded Romani, ghosts, and the beautiful Special Inspector, Mingli Zhao. Is she truly from the secret depths of Scotland Yard or is she instead a heartless spy and murderess?

In a breakneck chase through London’s streets and fighting hand-to-wand high in the skies inside a lethal airship, Leopold must destroy a secret society to defeat their plan for world domination, unmask the girl, and rescue his daemon friend from the deadly Daemon Device before all is lost. 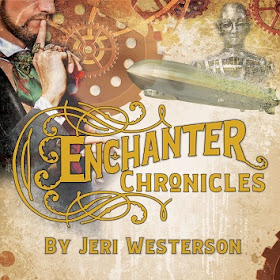 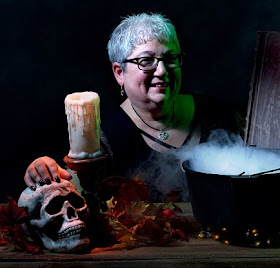 About the Author:
website-FB-Pinterest
L.A. native JERI WESTERSON is the author of the Crispin Guest Medieval Mysteries, a series nominated for 13 national awards from the Agatha to the Shamus. Her fifth novel BLOOD LANCE was named one of the Ten Hot Crime Novels for Colder Days by Kirkus Reviews, and her sixth, SHADOW OF THE ALCHEMIST, was named Best of 2013 by Suspense Magazine. Her twelfth, TRAITOR'S CODEX, was  released in May. For her paranormal fantasy series, BOOKE OF THE HIDDEN, Romantic Times said, “BOOKE OF THE HIDDEN is paranormal romance perfection…Jeri Westerson is flawless in this tale of adventure, mystery and saucy romance.” The last in the series, THE DARKEST GATEWAY, releases October 2019. THE DAEMON DEVICE, her new historical fantasy/steampunk novel, first in the Enchanter Chronicles trilogy, also releases in October. Jeri was twice president for the Southern California chapter of Mystery Writers of America and OC Sisters in Crime, and former vice president of Sisters in Crime Los Angeles. See more at JeriWesterson.com and BOOKEoftheHIDDEN.com.
Sharon Stogner at 12:00 PM
Share