Fans of the original "Beauty and the Beast" or the Grimm Brothers fairy tales won't want to miss this great tale.

It has been five months since Clarabelle Weaver saved the life of the infamous Great Lord and happily accepted his unexpected marriage proposal. With their wedding less than a week away, she is finally stepping into the unfamiliar world beyond her village to face nobility she never knew existed.

But it’s not only them who are interested in her presence.

The enemy is also stirring for this historic occasion. Their focus not on the man they see as their reviled “Dark Lord”, but on her as the young woman who supposedly carries his heir.

Clara must weave a path through attempted assassinations and poisonings whilst also proving to the court that she’s suitable to become their ruler’s Great Lady… all before taking their vows. But has her training prepared her for an attack that could send the kingdom into war?
Add to Goodreads 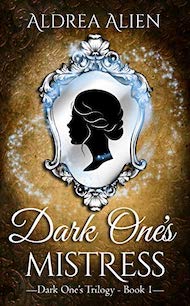 About the Author:
Website-FB-Twitter
FB Group-Instagram
Goodreads
Aldrea Alien lives in New Zealand with their family, including a menagerie of animals, most of which are convinced they're just as human as the next person. Especially the cats! By day, they wrangle the family, often writing romantic fantasy by night.

Visit their website to sign up for their newsletter so you can stay informed about new releases.

To get behind the scenes, join Aldrea's Facebook Group.