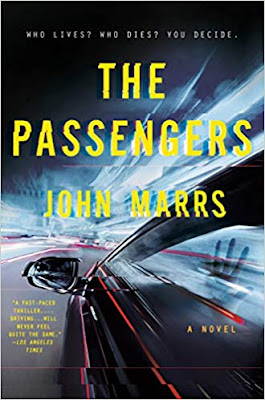 by John Marrs
August 27, 2019
349 pages
Berkley
You’re riding in your self-driving car when suddenly the doors lock, the route changes and you have lost all control. Then, a mysterious voice tells you, “You are going to die.”

Just as self-driving cars become the trusted, safer norm, eight people find themselves in this terrifying situation, including a faded TV star, a pregnant young woman, an abused wife fleeing her husband, an illegal immigrant, a husband and wife, and a suicidal man.

From cameras hidden in their cars, their panic is broadcast to millions of people around the world. But the public will show their true colors when they are asked, "Which of these people should we save?...And who should we kill first?"

“THE PASSENGERS is a 1970s disaster movie by way of Black Mirror, with an added dash of technology-gone-wrong straight out of Michael Crichton….If you’re looking for a sleek, exhilarating ride, look no further.”— Financial Times

“One can almost hear the Hollywood music in the background as the action unfolds; the plot twists are truly gripping….Summer blockbuster entertainment at its best.”— Kirkus Reviews


“[THE PASSENGERS’s] strength lies in its well-developed characters and in its exploration of issues such as the growing role of AI, mob psychology, and the ethics of who gets to decide who lives or dies.”— Publishers Weekly


“Marrs excels at thrilling readers by creating a real sense of tension and delivering a believable, harsh criticism of modern society through this dark and entertaining story.” —Los Angeles Times

About the Author:
website-FB-twitter
Until recently, I worked as a freelance journalist based in London, England, and spent 25 years interviewing celebrities from the world of television, film and music for national newspapers and magazines.

My debut novel The Wronged Sons, was released in 2013 and in May 2015, I released my second book, Welcome To Wherever You Are.

In May 2017 came my third book, The One. It was chosen as the book of the month for BBC Radio 2's Book Club.

The Wronged Sons was re-edited and re-released in July 2017 under a new title, When You Disappeared.

​My fourth book, The Good Samaritan, was released in November 2017 and became a Number One hit world-wide.

In 2018 I released my police procedural thriller Her Last Move, and thanks to my brilliant readers, I was able to start working as a full-time author.

In April 2019 came The Passengers, a thriller with a futuristic twist set in driverless cars. It will be released in the US in August.

In summer this year, filming starts for a ten-part TV series of The One, set to broadcast on Netflix worldwide in early 2020.


GIVEAWAY
print copy of The Passenger
(US only)